Life of Saint Paul. Thursday with the Saints. Evening edition

Catholic CatechismREFLECTIONSThursdays with the Saint 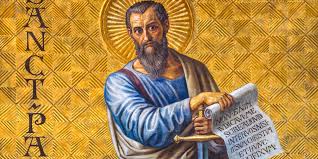 Saint Paul is one of the most important and influential of all the saints. Many of his writings are contained in the Canon of the Bible and have influenced the growth and development of the Church since the first century.

Just like Saint Peter, Saint Paul’s life event is also recorded in in the Bible and the sacred traditions of the Church.

The Bible did not give an account of Paul’s birth but only mention that he was a zealous Jew who kept the Commandment of God but had no good knowledge of Christ from birth. He Persecuted the early church and was even at the Death of Saint Stephen the first Martyr of the Church.

How He Met Jesus

According to the New Testament book Acts of the Apostles, Paul was a Pharisee. He participated in the persecution of early disciples of Jesus, possibly Hellenised diaspora Jews converted to Christianity, in the area of Jerusalem, prior to his conversion.

Some time, after having approved of the execution of Stephen, Paul was traveling on the road to Damascus so that he might find any Christians there and bring them “bound to Jerusalem”. At midday, a light brighter than the sun shone around both him and those with him, causing all to fall to the ground, with the risen Christ verbally addressing Paul regarding his persecution.

Having been made blind, along with being commanded to enter the city, his sight was restored three days later by Ananias of Damascus. After these events, Paul was baptized, beginning immediately to proclaim that Jesus of Nazareth was the Jewish messiah and the Son of God.

Saint Paul spent the rest of his life (approximately 30 years) preaching the word of God to lost souls he met and converted along the way, primarily in Italy and Greece.

His Role in Christianity

Most of the Christian moral teachings are based on his epistles. Therefore, we can say that the writings of Saint Paul forms the basis of our Christian law.

From the life of saint Paul, we can learn following lessons:

Paul traveled throughout much of Europe, particularly in Macedonia, Greece, and Italy.

While preparing for a missionary trip to Spain, he was imprisoned in Caesarea by the Jews for two years. He traveled again, was shipwrecked in Malta, and was imprisoned for another two years for preaching in Rome. Despite these imprisonments, Paul continued to preach.

Of the 27 books in the New Testament, 14 have been attributed to saint Paul; seven of these are widely considered authentic and Paul’s own, while the authorship of the other seven is disputed.

The undisputed letters are considered the most important sources since they contain what everyone agrees to be Paul’s own statements about his life and thoughts.

In Paul’s writings, he provides the first written account of what it is to be a Christian and thus a description of Christian spirituality. His letters have been characterized as being the most influential books of the New Testament after the Gospels of Matthew and John.

The bible recorded many miracles done by Saint Paul; they include the following among others;

The date of Paul’s death is believed to have occurred after the Great Fire of Rome in July 64, but before the last year of Nero’s reign, in 68.

Catholics believe that Paul died for his faith and became a martyr of the Roman Catholic Church, which was founded by Jesus, who commissioned Peter the Apostle as the “rock” upon which his Church would be built.

On June 29, 1867, Pope Pius IX canonized or elevated him to sainthood as Paul of the Cross in exchange for his conversions, persecutions, and fearless representation of the life and lessons Jesus Christ.

His feast day is on June 29 when he is honored with Saint Peter, although he is also honored on other days throughout the year, January 25, for his conversion, February 16, for his shipwreck, and Nov. 18 for the dedication of his Basilica.

May God grant us the Blessings and graces of Saint Paul his faithful and zealous servant an may He help us to imitate his good virtues.

Life of Saint Peter. Thursday with the Saints. Morning edition

Jesus is ready to forgive. Friday 13th Week Ordinary Time of the Year B