The Power to Be One. Thursday of the Seventh Week of Easter 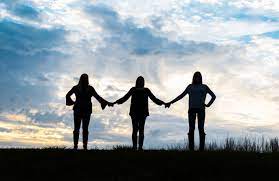 Breakfast with The Word: Thursday of the Seventh Week of Easter

The power to be one cuts across every aspect of human existence. The number one is underrated but very powerful with meaning.

In the gospel of today, Jesus includes in His prayer anyone who will be His future disciples. He widens His attention and includes those who will follow him through the preaching of the apostles, by implication, all of us.

Jesus prays in verse 21 and 22, that they may be one and in verse 23 He added: “that they may be perfectly one “. He does not want any single division among them and the only standard for this unity is the bond that exists between the Father and the Son.

There is a power that flows when we truly become one. God created man in His image and likeness and God expects man to be like His Creator.

In the Godhead, there is unity, bond and love. This is the standard expected from all of us who belong in Christ. This is the Church’s standard for every marriage.

The power to be one comes from God. It is the intention of the Creator from the beginning of creation. He created two different forms of human beings, yet not differently, but one taken from the other.

Jesus does not want to Lose You

Jesus thinks of You. Tuesday Seventh Week of Easter

Victory Belongs to the Lord

That We May be One

We Shall Receive If We Ask

Put Everything In God’s Hands

The Mystery of One.

Among all numerical figures, number one is the only number that can never be divided by any other number but yet in every number. Imagine how powerful one is.

You can never divide it. Even when you try to put it in half and half, it is still one and one. When you remove one from any number, there is still another one in the other number. If you remove all, one will remain, if you remove the last one remaining, then it becomes zero, which means nothing.

So, we can never do without the number one. This surely indicates that we can never succeed without oneness. The power to be one is already from nature. It takes wisdom to discover this.

Hence, we can hardly succeed without unity and peaceful co-existence with one another. This is the number that characterizes the Trinity (Three in One).

Jesus knows the power of Oneness, He understands the power of a unified force that is why He kept on hammering on this and praying and seeking for it. He exhibits this in the breaking of bread telling us that we belong to one body in Him.

The prayer of people united with one heart can break any barriers. The power to be one is so great that it makes it hard for the enemy to break such a unified force. Also, God answers prayers when we pray with one heart.

In Matthew 18:20, Jesus assures His disciples “where two or three are gathered in my name, I am there”

In Acts 1, immediately after the ascension, the apostles in one heart and one Spirit entered into prayer and the Holy Spirit came upon them in a mighty way.

Also in Acts 12, When Peter was arrested by Herod, the believers in one heart and one Spirit remained in prayers, the prayer was so powerful that God sent His angel to rescue Peter.

The power to be one can make prayer highly effective. This is when we pray with love, bond and unity. It is not a gathering of believers with wickedness, envy, hatred and dissension in their hearts. God does not come where there is no peace. A peaceful and pure heart is the dwelling place of the Holy Spirit.

In Mathew 18:19, Jesus says “in truth, I tell you once again, if two of you on earth agree to ask anything at all, it will be granted to you by my Father in heaven.

In Acts of the apostles 16, Paul and Silas united in one heart and brought down power from heaven through their praises.

Our problem is that we are seeking the face of heaven with hatred, disunity, selfishness and divided hearts. Some are praying for the death of the other person, and not for a peaceful co-existence. Our prayers then become powerless and less effective.

Proverbs 14:20 says that a heart at peace is what gives life to the body but envy rots the bones. In 1 Timothy 2:8, Paul asks Timothy that he desires that men pray in every place lifting holy hands in prayer to God without anger, dispute and controversy. There is power when we come together with one heart unified in prayer.

The only secret to stand and be strong is one heart and one Spirit. Any family, organization and group that can unite in anything they do, will be very hard to break. The power to be one is God’s intention for every human being.

When the number one is present, it means there is something. Without it, there is nothing. Zero is not a number but nothingness, which is like the state of things before creation.

The easiest way to destroy any family, organization, whether political, religious, economical etc is to bring division among them. What led to the fall of many great Kingdoms today is division and self-aggrandizement.

Divided we must fall but united we must stand. Here, when one tries to fall, at least he rests on the shoulder of the other to rise again and this power to be one rests on us. We are the ones to make it happen.

How good and pleasant it is when brothers live together in unity. It is like precious oil poured on the head, running down on the beard, running down on Aaron’s beard, down on the collar of his robe. It is as if the dew of Hermon were falling on Mount Zion. For there the Lord bestows his blessing, even life forevermore.” (Psalm 133:1).

May God bless you dearest and give you the grace to live in unity and peaceful coexistence with one another Amen.

Jesus does not want to Lose You. Wednesday Seventh Week of Easter