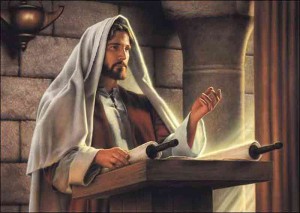 In last week’s reading (Luke 4:14-21), Jesus announced the inauguration of his ministry with a synagogue reading from Isaiah and that today the anticipated prophecy was being fulfilled in their hearing (v. 21). Jesus points to himself as the fulfillment of the prophecy and as the one able to offer salvation to all who hear him.

In this week’s reading we find out what the audience thought of Jesus’ prophetic declaration. Notice how the whole group reacted as one. All who witnessed this message responded in the same way, with wonder and amazement. This is not the first time in Luke that people respond with wonder to the message about Jesus. In Luke 2:18, all who heard the shepherds’ story responded with wonder. Jesus’ parents responded with wonder to Simeon’s declaration that Jesus is God’s salvation for both Gentile and Jew (Luke 2:33). The proper response to the good news of God’s at work in the world through Jesus is wonder and amazement. Today the messiah that was accepted and listened to was rejected by the same people.

Instead of paying deep attention to his message, they started questioning his family background. Is this not Joseph’s son? Many scholars alluded the reasons for this question. They were amazed because they knew Jesus’ background, of course he didn’t attend any formal education, and then how can he speak like one? It shows lack of knowledge of who Jesus is among his listeners. Secondly, everything about Jesus is full of surprises, amazement and wonders. Ask yourself, do you really know who Jesus is? How many times have you rejected the word of a Minister of God because you know His background, or because you are his friend? When Jesus continues his proclamation with a second saying, “No prophet is acceptable in his home country” (v. 24), which for the first time in Luke, Jesus is identified as a prophet, brought rejection rather than acceptance in the place where he is well known. Sometimes the saying that over familiarity breeds contempt showcases itself here.

The crowd wanted Jesus to do the same miracles in Nazareth that he did in Capernaum. There may be some rivalry between the towns but most likely the people of Nazareth feel that the hometown son (Jesus) should show them special favor and consideration, especially if he is the messenger and fulfillment of such good news. Many Christians today are interested not in the word of God, not on repentance, nor coming close to God, but in signs and wonders, in fake prophecies and in miracles. When the Jews wanted Jesus to work some signs, Jesus replied that No prophet is acceptable in his home country” (v. 24), which indicates that what Jesus needs from his listeners first is acceptance of his presence and His words. In John 15:7 He says “If you remain in me and my words remain in you, ask whatever you wish, and it will be done for you.” But today we leave the first premise of abiding in Him, and then pursue the second premise. Many today think for one to prove that he is called by God; He must be a miracle worker, just as the Jews today expect miracles to certify Jesus as the Messiah. The truth is that no one is a miracle worker, God works the miracles.

In the gospel too, Jesus continues his proclamation by alluding to two famous prophets: Elijah and Elisha. Of all the stories about these two famous prophets, Jesus emphasized on the ministry done on behalf of those who are not part of the Jewish origin. The implication is that Jesus too has a ministry that is directed at those beyond the borders of his hometown. Once again, Luke is reminding his readers that Jesus’ salvific ministry is available to all. In Luke’s gospel, there is an emphasis on salvation for both the Jew and the Gentile (e.g., Luke 2:31-32; 3:6). And here in Jesus’ initial proclamation of good news; he makes it clear that he will not be a prophet who serves the special interests of his hometown but rather a messenger of good news for the whole world and especially the vulnerable.

In the second response, just as in the first response, all of them had the same reaction. The hometown crowd was full of anger. They heard Jesus proclaim the good news; they want proof (in the form of signs) that Jesus is the prophet he claims to be; and they hear, with anger, his declaration that his ministry is directed to all. So, they respond with anger, and as a group they rise up and try to kill him (v. 29). Jesus’ ministry begins with the proclamation of good news; his proclamation is ultimately rejected; and the crowd attempts to kill him. In many ways this is a foreshadowing of the way that Jesus’ ministry will unfold in the years ahead. Verses 14-21 tell of Jesus’ initially favorable reception and his reading from the scroll of Isaiah, But Verses 21-30 continue Jesus’ remarks and record the hostile response of the congregation. This is also the basic outline of the book of Acts. In that book: The apostles begin their ministry in Jerusalem, every Jew’s hometown. The people receive them favorably on the day of Pentecost, and three thousand people are baptized (Acts 2). Later the story quickly turns, and the church is persecuted, often severely.

Whatever you do in life, there will be acceptance and rejection, and there will be times of joy and challenges. It is not always a thoroughfare. You are posted in a place and people accept you with great enthusiasm when you started, you carry all their burdens, but at a little mistake, when they feel you don’t do what they want, or when you eventually try to correct some anomalies, they all turn back against you. You are not left alone, Jesus also suffered the same.  Sometimes those you help today, those you suffer today, those you kill yourself for today, may turn against you tomorrow. Never do anything to impress anyone, just as they are praising you today. They may turn against you tomorrow. Jesus set out in His earthly ministry to please God rather than men. Secondly, Christians and Gods ministers are charged with preaching the full and complete word, the word that breaks the heart and the saving word.

In our second reading today Paul reminds us that the motivation for this prophetic mission must be the following cardinal virtues: faith, hope and love. Faith in God sustains us in our prophetic ministry in spite of the obstacles we encounter. Hope motivates us to remain focused, and to believe that our efforts will not be in vain. Then everything we do, should be motivated by love of God and neighbour.

THE GOOD NEWS IS SALVIFIC EVEN IN PAINS, NEVER GIVE UP ON YOUR DREAMS