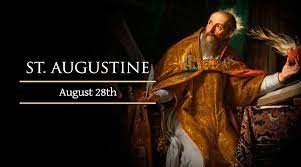 The Lenten season is one that calls us to repentance and reflection about the kind of life we live.

In today’s Thursday meeting with the Saints, we shall look into the life of Saint Augustine of Hippo who once lived a wayward life and later repented.

St. Augustine was born in 354 CE in the city of Tageste, Numidia (present-day Algeria), and attended school in both Madaura and Carthage, where he studied grammar and rhetoric.

While his mother was a Christian, his father was a pagan, later converting, possibly on his deathbed, to Christianity.

St. Augustine during his early life was a womanizer, gambler and critics of the virtues.

He fathered a son from a mistress before He turned twenty, lived with her for 10 years out of wedlock, and then dumped her so her could marry a socialite.

Even after he entered a monastery he used to pray, “Lord, make me chaste, but not yet.”

Two major figures in the Change life of St. Augustine are St. Monica his mother and St. Ambrose the Bishop whose Homily captured his attention when He was walking along his church.

He was baptized and later became a Priest and then the Bishop of Hippo. After he conversion, St. Augustine was a renowned theologian and prolific writer, he was also a skilled preacher and rhetorician.

He is also one of the Doctors of the Church.

Lesson from the Saint Life

During this Lenten period we can learn the following from the life of St. Augustine.

During the early life of St. Augustine, we see him living a wasted life and a life that is sinful but He later turn around.

Do you know that you too can turn around and life a better life and be please God by your life style?

St. Augustine was a man of great wisdom and knowledge even before his repentance. He used his knowledge greatly like St. Paul and served God.

He wrote many articles and books. As a matter of fact, you cannot pass through the seminary without reading the books of St. Augustine.

St. Augustine lived a wayward life before His conversion to Christianity and after his conversion, He left all those things that did not please God and pursue holiness.

From his life style, we can learn that Holiness is a good way of life and it should be pursed.

He longed for God with his whole heart which made his famous quote “Because God has made us for Himself, our hearts are restless until they rest in the Lord”.

St. Augustine was canonized by popular acclaim, and later recognized as a doctor of the church in the year 1298 by Pope Boniface VIII.

St. Augustine Feast Day is on 28th of August.

St. Augustine is the patron saint of brewers, printers, theologians. He is also invoke against sore eyes.

The Annunciation of the Lord: Ten Lessons To Learn