St. Zita Pray for Us. 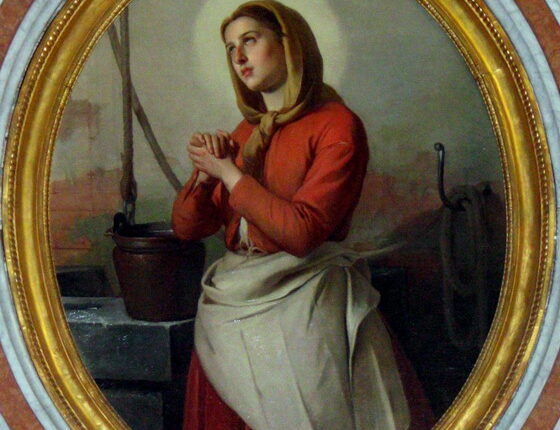 St. Zita is an Italian saint, the patron saint of maids and domestic servants. She is often appealed to in order to help find lost keys. She was born around the year 1212 in the Tuscan region of northern Italy, in a village not far from Lucca, to Giovanni and Buonissima Lombardo.

To help out her impoverished family, Zita took a position in the household of a wealthy landowner. St. Zita was born into a poor but holy Christian family. Her older sister became a Cistercian nun and her uncle Graziano was a hermit whom the local people regarded as a saint.

St. Zita herself always tried to do God’s will obediently whenever it was pointed out to her by her mother. At the age of twelve Zita became a housekeeper in the house of a rich weaver in Lucca, Italy, eight miles from her home at Monte Sagrati.

St. Zita was not always treated with kindness and respect, and she was often overburdened with work from her employers and the other servants who worked with her. She found time every day to attend Mass and to recite many prayers, as well as to carry out her household duties so perfectly that the other servants were jealous of her. She considered her work part of her prayer life.

She attended daily Mass, recited morning and evening prayers, and slept on the bare floor for penance. Her work was holy, as she was famous for the saying, “because being busy was a sign of holiness while lazy people were fake”.
She was always persecuted for her piety, to the point that a male colleague made advances toward her and she was forced to physically defend herself.

Her employers at first refused to believe her side of the story that she was an innocent victim and object of lustful and indecent intentions. They and many of her fellow servants preferred to believe the worst and presumed she had led the man on or had wanted to seduce him. She was totally chaste and pure but refused to answer their lewd interrogations because they had already decided she was guilty. Her innocence was later established and she was vindicated.

St. Zita’s reputation for charity soon spread throughout Lucca. And in later years, she became the trusted housekeeper in charge of all the Fatinelli family’s household affairs and goods.

1.Miracle of The Loaves: One commonly told story about Zita recounts the presence of angels at her work station in the kitchen. Zita left her work one morning to care for a family in need. Other servants in the kitchen, hoping to get her in trouble, reported to the Fatinelli family that Zita had left her post, accusing her of shirking her work and being lazy. When Zita’s employers came down to the kitchen to investigate, they found angels in the kitchen, baking the bread in Zita’s place.

2. Another story tells of Zita carrying bread in her cloak to bring to the poor. Jealous servants reported this to the master, who confronted Zita. Upon opening the cloak, however, it was found to be full of flowers.

3. On another occasion, St. Zita was returning from distributing alms when she encountered a beggar. Having nothing left to give him, she accompanied him to the village well to draw him a cool drink. She let a copper jug down into the well, and in the act of holding it out to him, made the sign of the cross over the water, praying that this drink might be blessed to the poor man. As he made to drink, he found that the water had turned into wine.

4. During a famine, people lined up for food, and Zita gave away almost all of the family’s dry beans. She’d intended to restock the pantry but didn’t get the chance before the master of the house decided to take stock of the beans and sell them at market. Fearful that she would be fired or thrown into jail because of the missing food, Zita prayed, and, miraculously, the dry beans were restored.

1. Create Time for God: St. Zita from her earliest days in service, made a point of taking time each day for prayer, both attending daily Mass and getting up in the middle of the night for a period of solitary prayer.

2. We must be grateful for what we’ve been given and stand ready to share it with others when they have need.

3. Do not seek Revenge: When became the housekeeper in charge of all the Fatinelli family’s household affairs and goods. She managed the servants beneath her with compassion and kindness and without ever attempting revenge for their previous ill treatment of her.

4. We must remember that in serving our families, we are serving God. St. Zita firmly believed that in all her little household tasks, she was serving God, not just man. 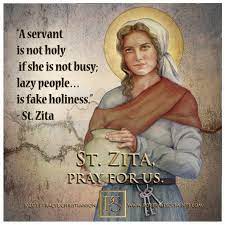 “A servant is not holy if she is not busy; lazy people…is fake holiness.”  St. Zita

St. Zita died on April 27, 1272. She had lived for about sixty years old. The Fatinelli family immediately started praying to Zita and invoking her aid. Through their intercession, Zita became a widely invoked saint. After her death numerous miracles were wrought at her intercession.

In 1580, Zita’s body was exhumed and found to be incorruptible. Since then, it has been on display for veneration at the Basilica in Lucca. Over 150 miracles were credited to her before Zita was canonized in 1696, so that she came to be venerated as a saint in the neighbourhood of Lucca, and the poets Fazio degli Uberti and Dante both designate the city of Lucca simply as “Santa Zita”. She is one of the “Incorruptibles” (bodies of Catholic saints that were found to miraculously not deteriorate). 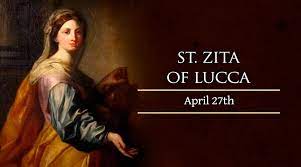 Her feast day in the Roman Catholic Church is April 27. To this day, families bake a loaf of bread in celebration of Saint Zita’s feast day. 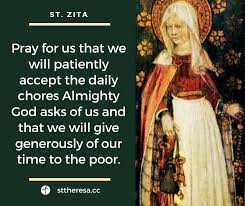 St. Zita, teach us to find Christ in our chores. Beg for us the graces we need to love our families and complete our work each day in peace and joy. Help us to cultivate gratitude and charity in ourselves and our children, so that we may one day rejoice with you at the feet of our Heavenly Father. Amen.

Olori Flora, from Ososo, Edo State. A graduate of Computer science from Auchi Polytechnic, Edo State. A lover of God’s word and a Mary Devotee. I am a Graphic designer, Writer, UI/UX designer, VA and a Fashion designer. 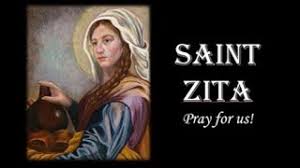 May God help us to emulate the lifestyle of his servant st. Zita, Amen

Jesus is Open to relating with Everyone. Saturday 1 Week Ordinary Time