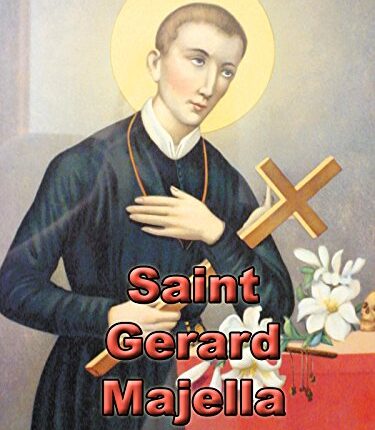 St. Gerald Majella was born in 1726 in Muro, a little town in Southern Italy. He was twelve years old when his father died and he became the breadwinner of the family.

He was an apprentice to a local tailor and was beaten and bullied by the foreman. After his apprenticeship, he announced his intention to be a servant to the local Bishop of Lacedonia.

He was able to turn his hand to anything and worked for the bishop three years before he died. Whether he was bullied by the tailor or been taken for granted by the bishop didn’t matter; he saw suffering as part of his following of Christ.

There was no sudden startling conversion for Gerald. It was just a steady growth in the love of God. He joined the redemptorists in the year 1749 and took his first vows on July 1752 which was on the feast day of the most Holy Redeemer as well as the feast of Our Lady of Mount Carmel.

St. Gerald Majella worked as a Gardener, Sacristan, tailor, porter, cook, carpenter and Clerk of works in Caposele. He was a great woodcarver which made him adept at carving Crucifixes.

He was a treasure in the community where he stays but had only one ambition; to do the will of God in everything. 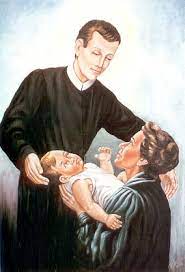 Because of the miracles God worked through St. Gerald Majella’s prayers with mothers, the mothers of Italy took him to their heart and made him their Patron.

At the process of his beatification one witness testified that he was known as “il santo Dei Felice Patri” meaning the saint of happy Childbirth.

Thousands of mothers have felt the power of St. Gerald through the league of St. Gerald. Many hospitals dedicated their maternity wards to him and gives medals and prayer leaflets of St. Gerald to their patients.

Thousands of Children have been named after Gerald even girls are named after him and it is interesting to know how “Gerald” takes form as Gerardo, Geralyn, Gerardine, Gerianne, Gerardette.

Most of his miracles were performed in the service of others. He restored life to a boy who had fallen from a cliff, he blessed the scanty supply of wheat belonging to a poor family and it lasted until the next harvest; several times he multiplied the bread that he was distributing to the poor.

One day St. Gerald Majella walked across the water to lead a boatload of fishermen through a stormy wave to the safety of the shores.

This saint told people their sins which they are afraid to confess, and brought them to penance and   forgiveness. The saint was also gifted with Bi-location.

MORAL LESSON FROM THE SAINT

St. Gerald Majella was one of the saints who submit to the divine will of God. He was devoted to the Blessed Sacrament and obedient to higher authority even with all the miracles he performed on earth.

From this saint, we learn how to submit to God’s  will at all time and to be close to Jesus in the Eucharist.

Always frail in health, it was evident that St. Gerald Majella was not to live long. In 1755, he was seized with violent hemorrhages and dysentery and his death was expected anytime soon.

The sickness left him for a temporary time but Gerald knew he had only a little over a month to live.

Before long, he did have to return to his sick bed and began to prepare himself for death.  He was absolutely abandoned to the will of God and he had this sign placed on his door:

“The will of God is done here, as God wills it and as long as He wills it.”

Often, he was heard to say this prayer: “My God, I wish to die in order to do Thy most holy will. A little before midnight on October 15, 1755, his innocent soul went back to God.

At the death of St. Gerald Majella, the brother sacristan, in his excitement, rang the bell as if for a feast, instead of tolling it for a death. Thousands came to view the body of “their saint” and try to find a last souvenir of the one who helped them so often.

After the death of St. Gerald Majella miracles began to be reported from all parts of Italy, attributed to the intercession of Gerald. In 1893, Pope Leo XIII beatified him, and December 11, 1904, Pope Puis X canonized him as a Saint. 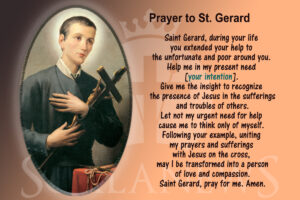 May God help us as we emulate the lifestyle of His saint, and live like him in total obedience and love of the Blessed Sacrament.

St. Gerald Majella, Pray for Us.

Jesus does not reject the rejected. Friday After Epiphany