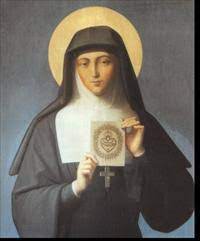 St. Margaret Mary Alacoque was a French Roman Catholic Visitation nun and mystic, who promoted devotion to the Sacred Heart of Jesus in its modern form. She was born on July 22, 1647, L’Hautecour, Duchy of Burgundy, Kingdom of France as the only daughter of Claude and Philiberte Lamyn Alacoque, who had also several sons (Chrysostome Alacoque, Jean Alacoque, Jacques Alacoque, Catherine Alacoque, Claude-Philibert Alacoque, Gilberte Alacoque).

Her father was a prosperous notary; the family owned a country house and farmland, and had some aristocratic connections. Margaret’s godmother was a neighbor, the Countess of Corcheval. Margaret has always shown an intense love for the Blessed Sacrament and preferred silence over typical childhood play.

She began practicing severe corporal mortification after her first communion at 9-years-old. After the death of her father, Margaret and her family were forced into poverty when a relative refused to hand over the family’s assets.

A rheumatic affliction kept her bedridden for four years. During that time she was brought home, where some of her father’s relatives had moved in and taken over the direction of the farm and household.

She and her mother were treated almost as servants. After making a vow to the Blessed Virgin Mary to consecrate herself to religious life, Margaret instantly returned to perfect health. In recognition of this favor, Margaret added the name “Mary” to her baptismal name.

St. Margaret Mary Alacoque experienced visions of Jesus Christ for most of her life, but thought they were a normal part of life and continued to practice austerity. During this time, her only consolation was frequent visits to pray before the Blessed Sacrament in the local church.

This painful situation grew more acute after Margaret’s recovery, for the relatives tried to regulate all her comings and goings. Not allowed to attend church as often as she pleased, the young girl was sometimes seen weeping and praying in a corner of the garden.

It grieved her deeply that she could not ease things for her mother. When she was 17, her eldest brother’s coming of age saved the day, for the property now reverted to him, and her mother encouraged her to socialize, in the hopes of her finding a suitable husband.

Out of obedience, and believing that her childhood vow was no longer binding, she began to accompany her brothers in the social events, attending dances and balls.One night, after attending a ball in an evening dress, Margaret had a vision of Christ, scourged and bloody. He accused Margaret of forgetting about him.

He showed her that His heart was full of love for her because of the promise she made to His Blessed Mother as a child. After this vision, Margaret was determined to fulfill the vow she made years ago. She entered the Visitation Convent at Paray-le-Monial in May 1671 to become a nun.

Alacoque was subjected to many trials to prove the genuineness of her vocation. She was admitted to wearing the religious habit on 25 August 1671, but was not allowed to make her religious profession on the same date of the following year, which would have been normal.

A fellow novice described Margaret Mary as humble, simple and frank, but above all kind and patient. Finally, she was admitted to profession on 6 November 1672.

During her time in this monastery, Margaret received several private revelations of the Sacred Heart of Jesus. These visions showed her the “form of the devotion, the chief features being reception of Holy Communion on the first Friday of each month, Eucharistic adoration during a ‘Holy hour’ on Thursdays, and the celebration of the Feast of the Sacred Heart.”

The Lord Jesus requested His love be made evident through her.

In her vision, she was instructed to spend an hour every Thursday night meditating on Jesus’ Agony in the Garden of Gethsemane, a practice, known as “The Holy Hour,” that later became widespread. Margaret Mary began to have experiences which seemed to be of supernatural origin.

The first of these occurred on December 27, 1673, when she was kneeling at the grille in the chapel. She felt suffused by the Divine Presence, and heard the Lord inviting her to take the place which St. John had occupied at the Last Supper.

The Lord told her that the love of His heart must spread and manifest itself to men, and He would reveal its graces through her. This was the beginning of a series of revelations covering a period of eighteen (18) months. When Margaret Mary went to the Superior, Mother de Saumaise (mother superior) with an account of these mystical experiences, claiming that she, a humble nun, had been chosen as the transmitter of a new devotion to the Sacred Heart, she was reprimanded for her presumption, she been seriously overwrought, Margaret Mary suffered a collapse, and became very ill.

The Mother Superior reflected that she might have erred in scorning the nun’s story and vowed that if her life were spared, she would take it as a sign that the visions and messages were truly from God.

When Margaret Mary recovered, the Superior invited some theologians and Margaret was unable to convince the theologians of the validity of her visions and they judged the young nun to be a victim of delusions.

A noted exception was the Jesuit Claude de la Colombière, later a canonized saint, who supported her, when he became the confessor of St Margaret Mary and judged her visions of Jesus as authentic.

He helped spread the message and was instrumental in getting her community to accept them. St. Margaret Mary eventually became the novice mistress and assistant superior, she led the monastery in observing the Feast of the Sacred Heart privately, and inspired the construction of a chapel built to honor the Sacred Heart before she died at age 43, on October 17, 1690.

She, St. John Eudes, and Blessed Claude La Colombiere are called the “Saints of the Sacred Heart”; the devotion was officially recognized and approved by Pope Clement XIII in 1765, seventy-five (75) years after her death.

The Sacred Heart is regarded as “the symbol of that boundless love which moved the Word to take flesh, to institute the Holy Eucharist, to take our sins upon Himself, and, dying on the Cross, to offer Himself as a victim and sacrifice to the eternal Father.”

When her tomb was canonically opened in July 1830, two instantaneous cures were recorded to have taken place. Her incorrupt body rests above the side altar in the Chapel of the Apparitions, located at the Visitation Monastery in Paray-le-Monial, and many striking blessings have been claimed by pilgrims attracted there from all parts of the world. 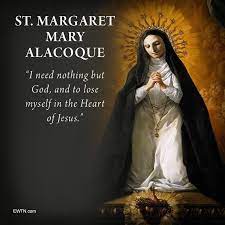 THE TWELVE PROMISES OF JESUS TO SAINT MARGARET MARY FOR THOSE DEVOTED TO HIS SACRED HEART; 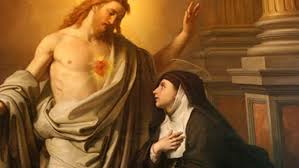 1.The life of Saint Margaret Mary teaches us to pray to God no matter our situation, we should not lose hope but turn to God always.

3.The life of St. Margaret Mary teaches us to hold fast to the instructions of God, even when men or circumstances will rise up against your given tasks, God who gave you the job will always find a way to help your fulfill your purpose. 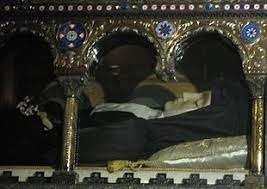 Margaret Mary died at age 43, on October 17, 1690, while being anointed. She spoke the words, “I need nothing but God, and to lose myself in the heart of Jesus.” On September 18, 1864, Margaret Mary was beatified by Pope Pius IX.

When her tomb was opened a few years later, two immediate cures took place and her body laid incorrupt. St. Margaret Mary Alacoque was officially canonized on May 13, 1920 by Pope Benedict XV.

Margaret Mary is the patron saint of those suffering with polio, devotees of the Sacred Heart, loss of parents. 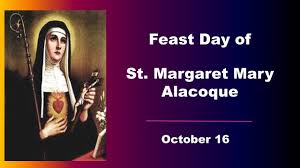 Her feast day in the Roman Catholic Church is October 16.

Saint Margaret Mary, thou who was made a partaker of the divine treasures of the Sacred Heart of Jesus, obtain for us, we beseech thee, from this adorable Heart, the graces we need so sorely. We ask these favours of thee with unbounded confidence. May the divine Heart of Jesus be pleased to bestow them upon us through thy intercession, so that once again He may be loved and glorified through thee. Amen.

O Lord Jesus Christ, who didst wondrously open the unsearchable riches of Thy Heart to blessed Margaret Mary, the virgin: grant unto us, by her merits and our imitation of her, that we may love Thee in all things and above all things, and may be worthy to have our everlasting dwelling in the same Sacred Heart: who lives and reigns, world without end. Amen., world without end. Amen.

May God help us to imitate the good virtues of Saint Margaret Mary in having Hope in Him and to be faithful in keeping our promises.