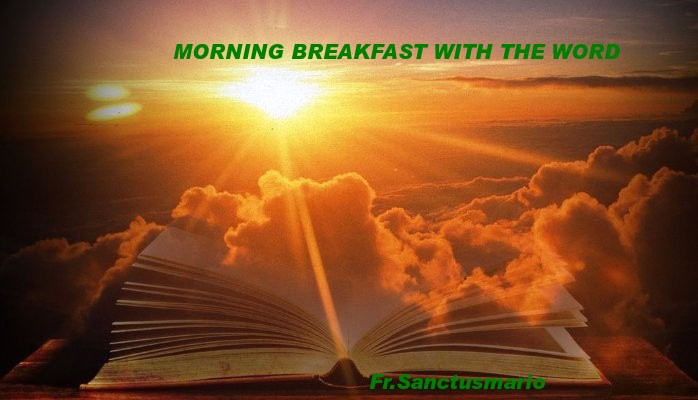 When We Face Oppositions

Morning Breakfast With the Word: Saturday 16th May 2020
John 15,18-21
Opposition means disagreement with something, often by speaking or fighting against it.  It is the action of opposing, resisting someone. We can encounter this oppositions in our ministry, families, places of work, friends, etc . Sometimes you encounter people who just hate you for nothing, work against you, misunderstand what you do etc. The truth is that if you are a true disciple of Jesus Christ and a child of God, always understand not many people will truly understand what you do. Many will laugh and joke with what you are doing, many will use you as their talking points day in and out, not for any reason but because they are not in consonance with what you are doing.
Today Jesus tells His apostles “If they world hates you, remember that they have hated me also. Jesus uses the word ” *if* ” which is a word that shows the possibility of something that might happen. Jesus says “If they persecuted me, they will also persecute you ” and in later in chapter 18, Jesus entered into agony. This shows that Jesus is preparing His disciples of what they will certainly face.  They might be thinking like most of us do that Christianity is only about breakthrough, enjoyment, success etc. To be a true disciple of Jesus is to be in opposition with evil, and surely they will fight you.
The World
John used the Greek word *kosmos* to refer to the world which essentially means those who live in it. But Jesus sees them as those who lack the true knowledge of God, He says in the gospel “They do not know the One who sent me”. They are those who opposed His teaching, those who do not believe in Him. He says in John 10:26-27, you do not believe in me because you are not my sheep. My sheep listen to my voice; I know them, and they follow me”. The World refers to those who hate his voice and hardly listen to Him. They are those who though might be going to church but see it as just obligations and even a place to show off their wealth and new clothes. They are *O yes* members, they do not actually believe what they are doing.  They see everything as mechanical. They hardly believe in the spiritual. They are those ruled by their desires than Godly principles. They are those who see Christianity as fake, scam, worthless, baseless etc. They pursue worldly possessions, designs, pleasures. In fact they do not want to hear anything God. They are enemies of the truth. They are in the world and of the world. They are also those full of evil. They only belong to the church to fulfill religious rites but have their faith in another thing. Their ideas are only influenced by worldly principles. They are those who give you millions of reasons on why the evil they perpetrate is good.
As A Disciple of Jesus
As a disciple of Jesus Christ you will meet them among your friends and family, colleagues, government positions, places of work.  The key here is that, when faithful ministers of Christ meet these types of opposition, they should not be downcast. They should know that their Master Jesus also underwent through this and they must surely encounter them. They should not be discouraged, they should not think God has left them or something strange is happening to them, it is part of their call as children of light.
The Only Way
Jesus started this discussion In John 15:5, when He says ” Iam the true Vine, Cut off From Me You can do nothing ” and ended it in John 16:33 when He says ” I have told you these things so that *in me* , you may have peace: in the world you will have trouble but take heart I have conquered the world. In Jesus, victory is sure.Paul is a true testament to this ( 1 Cor 15:57).
May God strengthen us and give us the grace to overcome our challenges today Amen
YOU MAY READ

Why You Must Forgive and Love One Another