What do you want from Jesus? Feast of Saint James 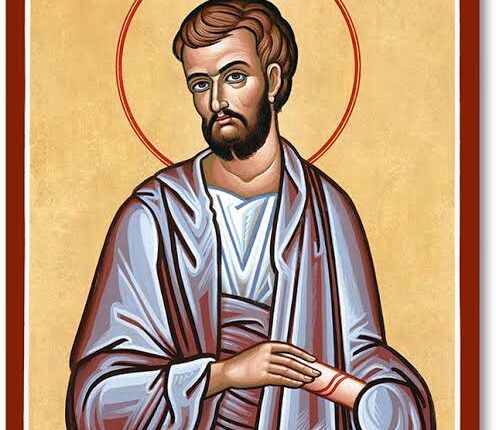 Breakfast with the Word. Feast of Saint James. 25th July

What do you want from Jesus?

Today. We celebrate the Feast of St. James the Apostle.

He is one of the great Apostles of our Lord Jesus Christ and member of the Twelve Apostles.

He belongs to what I may call the inner caucus of our Lord Jesus Christ, which also includes Peter, James and John. This particular James is the brother of John the beloved, the two sons Zebedee, whom Jesus called in Mark 1:19-20.

Jesus saw these two sons of Zebedee while they were in a boat mending their nets. When Jesus called them, they left their father Zebedee. He was in the boat with men who were working for him. But they just left their Father, their occupation and even the fish they may have caught to follow.

James teaches us to seek salvation first more than luxury. So, as you go in the presence of Jesus what do you want from Him? Is it for salvation first? Wealth? Luxury?

In the list of the apostles, we have two persons whose names are James. This particular James we celebrate today is known as St.James the Greater.

This is to distinguish him from the other St. James, known as St. James the Just and James the Less

He is said to be a relative of the Lord and the first Bishop of Jerusalem. We have St. James the Less, who is also known as Saint James, son of Alphaeus.

St. James is originally a fisherman. He is one of the first disciples and followers of the Lord.

Saint James committed himself to the apostolic work and followed Jesus through many important occurrences throughout the Lord’s ministry.

Like I said before, He belongs to the inner caucus and was often chosen together with St. Peter and St. John as the core three disciples who always accompany Jesus during some important moments of His ministry.

The three were present during the resurrection of the dead young daughter of the synagogue official. They were there during the Transfiguration of the Lord at Mount Tabor, and during the time of the Agony in the Garden of Gethsemane just before the Lord was to be betrayed and arrested.

Saint James was the first of the apostles to be martyred. He was beheaded by King Herod Agrippa I to please the Jewish opponents of Christianity.

Saint James was later buried in Jerusalem, and nothing more is known about him.

What do you want from Jesus?

In the gospel, the mother of James and John , the two sons of Zebedee came to Jesus with her sons to make a request from Jesus.

When she meets Jesus, she bowed low; and Jesus asked her ‘What do you want?’

Whenever we go in His presence, this is the question Jesus asks us. He asks this because He is interested in your condition.

What We want and what Jesus wants

When Jesus asks her, the woman said to him, ‘Promise that these two sons of mine may sit one at your right hand and the other at your left in your kingdom.’

‘You do not know what you are asking Can you drink the cup that I am going to drink?’

They replied, ‘We can.’ Jesus said ‘Very well , you shall drink my cup, but as for seats at my right hand and my left, these are not mine to grant; they belong to those to whom they have been allotted by my Father.’

The woman wants her sons to be the number one. This is also what we do. Many people want to make money to intimidate others.

He wants us to seek Him with all our hearts. Jesus seeks that we come close to Him . He knows that what we seek are ephemeral. He knows we do not understand that what we seek for in this life will soon varnish. Yet we kill ourselves, dragging and quarrelling over things that don’t matter.

Even when the other ten apostles heard about the visit of James mother they were indignant with the two brothers.

Then Jesus called them to him and said, ‘You know that among the pagans the rulers lord it over them, and their great men make their authority felt. This is not to happen among you. No; anyone who wants to be great among you must be your servant, and anyone who wants to be first among you must be your slave, just as the Son of Man came not to be served but to serve, and to give his life as a ransom for many.’

This is the main point, then other things will follow. So what do you want from Jesus? Why are you seeking His presence, Is it only for signs and wonders or to truly know Jesus and love Him.

Like Saint James, let us also belong to the inner caucus. Let us be committed in our relationship with the lord. This is the first and other things will follow. So, what do you want from Jesus?

May God bless us and give us the grace to seek Him with all our hearts. May He never forsake you. Amen.

Everything has an End. Tuesday 17th Week Ordinary Time