St. Angelo. Thursday with the Saints 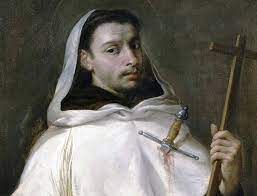 Little is known about the Life of this great Saint. Let us meet Him in today’s  edition of our Thursday with the Saints.

St. Angelo was born in Jerusalem in 1185 to the Jewish parents Jesse and Maria. His mother later converted to Roman Catholicism, and both he and his twin brother John were baptized when she converted.

His parents died while he was in his childhood and the Patriarch Nicodemus oversaw their education until the twins turned eighteen.

St. Angelo and his twin brother John entered the Carmelites aged eighteen at the Saint Anne convent near the Golden Gate to commence their novitiate. The two could speak Greek as well as both Latin and Hebrew.

In 1210, St. Angelo was ordained to the priesthood in Jerusalem and he traveled in Palestine.

He remained as a hermit on Mount Carmel when he was instructed in 1218 to leave for the Italian peninsula in order to preach against the patarini as well as the Albigensians and the Bulgars.

He had likewise been instructed to go to Rome to obtain from Pope Honorius III confirmation of the new and definitive rule for the order (later granted in 1226).

He set off on a Genoese ship on 1 April 1219 and stopped first in Messina before heading off to Civitavecchia before he ended up in Rome to meet with the pope.

The friar preached in the Basilica of Saint John Lateran while in Rome where he met both Francis of Assisi and Dominic of Osma.

It is said that he foretold that Francis would receive the stigmata while Francis foretold his premature death.

He settled on the Sicilian Island though his fame as a wonderworker caused crowds to flock to him.

He also had success in converting some Jews though most Jews in Palermo came to despise him for this since he himself was once Jewish.

He wanted to convert a Cathar knight named Berenger (known also in sources as Berengarius).

Tradition states that Berenger was living in incest and that the friar convinced the knight’s companion to leave Berenger.

Berenger became enraged and had him attacked in front of the church of Santi Filippo e Giacomo in Licata on 1 May 1220, and was struck with Berenger’s sword five times.

He died of his wounds within the week of 5 May and according to tradition asked for his assassin to be pardoned while urging the faithful not to avenge his death. He was buried at Santi Filippo e Giacomo.

Miraculous cures were attributed to St. Angelo  during his time and his “acta” stated that he sought to avoid fame and withdrew to a hermitage in the desert (in imitation of Jesus Christ) when he was becoming popular for his miracles.

He had healed seven lepers and the ailing Archbishop of Palermo Bernardo de Castanea while in Palermo.

St. Angelo sepulchre at Licata became a site of pilgrimage. The Carmelites venerated him as a saint since at least 1456 and the cult received papal approval from Pope Pius II at some stage during the latter’s pontificate.

In 1486, St. Angelo remains were moved from a wooden casket to a silver urn before being moved to a more precious urn on 5 May 1623.

St. Angelo relics were translated to a new church in Licata on 15 August 1662, and are now housed at Santa Maria dei Carmine [it]; the ending of a plague in the Kingdom of Naples in 1656, was attributed to his intercession.

Since 4 May 1626, he has been known as the patron saint for Palermo.

May God Grant Us the Grace to Forgive and Preserve like St. Angelo, Amen.

There is Great Power in the Holy Eucharist. Friday Third Week of Easter

Do You Truly Believe in the Eucharistic Presence?