The Political Arena is also A Place of Apostolate. Fr. Edmund Ugwoegbu 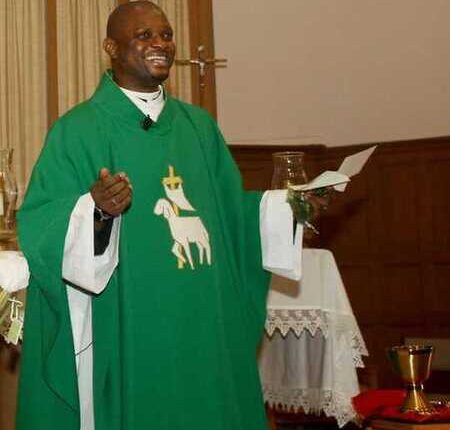 Interaction between Fr. Chrysantus Ugwoegbu and Fr. Edmund Ugwoegbu On the Relationship Between the Church and State.

Fr. Edmund Ugochukwu Ugwoegbu is a Catholic Priest of the Catholic Diocese of Enugu. He is very intelligent and gifted in many aspects of human endeavour. Fr. Edmund is from Owerre Ebeiri in Orlu L.G.A of Imo State and currently on study leave.

In recent times there is a misunderstanding on the Relationship between the Church and State and also the role of the Church in the political nature of the state. Many people are of the view that the Church and her ministers have to exonerate themselves when it comes to correcting political abnormalities. As a result of this misunderstanding, many who tried to speak were attacked from all angles.

Some also feel that the Church should be partisan. In this interaction, Fr Edmund Ugochuwu Ugwoegbu discusses in detail the exact nature of the relationship between the Church and the state. He streamlines in a clearer view the role of the Church when it comes to political affairs. Take time and read clearly. Put your comments in the section.

Question: How do you see leadership, and generally the political scenery in Nigeria?

Fr. Ugochukwu: An understanding of leadership warrants an appreciation of humanity in general and the social structure of human society at large. I see leadership as primarily a service. However, it is an elevated form of service, since it collocates both the individual and his immediate (or even extended) environment. Thereby giving rise to its microcosmic as well as macrocosmic perspectives.

Every leadership also gives rise to the existence of followership and naturally, leaders are meant to serve those who follow them and look up to them. Suffice it to say that it is when followers can comfortably accede themselves to the governorship of a person, can that person be truly referred to as a leader; otherwise it can only be called rulership (or at most dictatorship) which are other terms that go against what leadership denotes.

The political scenery of Nigerian leadership leaves a lot to be desired. Chinua Achebe had summarily described the problem of Nigeria as that of leadership. This is not solely because of the various Nigerian leaders which have been had over time (although they contribute to the mayhem seen in the country), but it is based on the leadership structure which was ab initio built on a shaky foundation.

Much discourse is required in this ambience but suffices to mention here that the Nigerian political scene has a long way to go in the right application of the principles of true leadership. Examples abound in this that they do not need further explanation.

Question: Sociologically speaking, the Church and Government are two institutions of the society that must function effectively for the well-being of the society. There has always been a correlation/ interrelationship that exists between institutions in the society evident in their functionality. How then do this correlation/ interrelationship exist between Church and Government (politics) in Nigeria?

Fr. Ugochukwu: At present, the interrelationship between the Church and Government in Nigeria does not announce adequate healthiness. This is due to the fragmented nature of the Nigerian religious structure. Internationally recognized as an Islamic state, the Church is almost always at crossroads with the government especially when it has to do with acquiring or claiming her right in the Nigerian society. Indeed, much still needs to be done and calls for an ongoing study in religious liberty and tolerance as enunciated in the 1999 constitution, which has turned out to be just merely scripted than practised.

It’s a pity that politics in Nigeria seems to lack ideology. As a result, there is much political apathy on the part of most Christians in Nigeria. These sets of Christians believe that Christianity is purely evangelistic and has nothing to do with politics. I once heard one saying that Jesus isolated himself from politics as seen in his constant refusal of kingship while on earth. What is your view on this?

Fr. Ugochukwu: Basically, I believe that man being a social animal cannot be overemphasized. And it is exactly the political apathy of a few people that makes the situation worse. As already pointed out in no. 2 above, I would think that few Christians do not just involve themselves in politics out of mere apathy, but out of a system that outrightly demeans honesty and enthrones corruption and favouritism.

Countless times, the masses (in which Christians are included) have shown up in politics only to be shown that they are nothing but second-class citizens.

Notwithstanding the above, I should think that Jesus did not isolate himself from the politics of his time that was why he often chided the leaders of the time into doing what they should in such a way that the people can also learn from them. I think that a good Christian should try all he/she can to better the political situation of Nigeria. Isolating oneself is tantamount to allowing the decayed system to delve into a ruinous end. This should not be so.

Question: Other Christians that want to join partisan politics are often under immense pressure as they find themselves frequently walking a tightrope between remaining faithful to Christian principles and breaking down misunderstanding generated by popular negative perceptions against politics? What is your view on such Christians?

Fr. Ugochukwu: I think that it is the shirking of allegiances and wills that has kept Nigeria where it is today. Nobody wants to be seen as fighting against the system for fear that favours enjoyed might be rid of him/her. However, I strongly believe that a Christian, solidly formed, has a lot to bring to the table of politics rather than joining the proverbial “bandwagon”.

Making a difference is so much needed in the political arena, and if the Christian does not do that, I wonder who will. The point remains that Christians should try and make themselves well seen, noticed and understood within the political realm. The political arena is also a place of apostolate (and even evangelization). If they join others in doing what they are doing, it could be said that they were never Christians from the beginning.

Question: So, are Christians supposed to be partisan or non partisan in politics?

Fr. Ugochukwu: The word “partisan” when seen as members of a particular political party or ideology, (as against when it is seen as a prejudiced view of things or people) is an important part of any political system. Partisan politics is embedded in the necessity of choosing between two alternatives. Christians also live in the world, participate in politics, vote and can be voted for, choose between presented persons and can also be chosen. Hence based on this, I think they can be partisan in politics, if the cause, person or party they support is for the common good.

Question: Matthew 22:15-21 and 1Timothy 2:1-4 shows the mutual relationship of Church and state. The state provides a proper atmosphere in which the churches carry on their work. General stability in the society will boost the effectiveness of the Church in its mission to evangelize.  Also, in Romans 13:1-4, Paul made it clear that God put the governing authorities in place. Thus, the Fusion between Church and Politics is unavoidable. However, considering the fuss this has brought in recent times, as we have seen some clergy meddle in politics much to the dismay of the faithful. How then can such fusion function effectively in Nigeria?

Fr. Ugochukwu: The technical nature of this particular question demands a greater discourse. For the present, however, it is worthwhile to mention here that conceptual as well as a situational understanding of people and events are important before deciding on a particular reality.

If a clergy in the course of his clerical ministry condemns social ills and beckons on the betterment of a hitherto decayed (or decaying) political structure (such as that of Nigeria), certainly that cannot be called meddling. On the other hand, if a clergy unduly mixes himself in matters of political squabbles and particularities, then it is to be highly discouraged.

Over and above this, however, it is good to understand that a perfect fusion between the Church and the state cannot be possible since they are geared towards diverse ends; one eternal and transcendental, the other temporal and physical. A certain relationship ought to exist and that is the ambience of the diplomatic sphere which is an inevitable institution for a smooth coexistence between the Church and the state.

Question: Perhaps Fr. there are limitations to this interrelationship between Church and politics. If so, what are these limitations or boundaries?

Fr. Ugochukwu: Delineating the limitations or boundaries may be a bit reductionistic or exaggerating. This is because, in practice, so many things do not come into play. For the Church, a basic principle with which she has always tried to maintain her boundaries is a discerning distinction between the sacred and the profane. The Church – politics relationship ought to be that in which each maintains its proper identity and vocation while pursuing a unified goal, which is hinged to the common good.

In summary, how can the Church help promote Good politics? In a clearer term, Fr. Please help us outline the role of the Church in politics?

Fr. Ugochukwu: The role of the Church in politics is solely that of a gadfly or (better put), a light in the political world. She does this by helping through her life and teachings, towards the betterment of society.

The Church is the conscience of the political arena; calling the political actors up to meet up to their duties for the betterment of human society. Thank you.

To Sanctify Our Lives. Sunday Breakfast with the Word 3rd Sunday of Lent.