The Eucharistic Miracle that Led to the Feast of Corpus Christi. 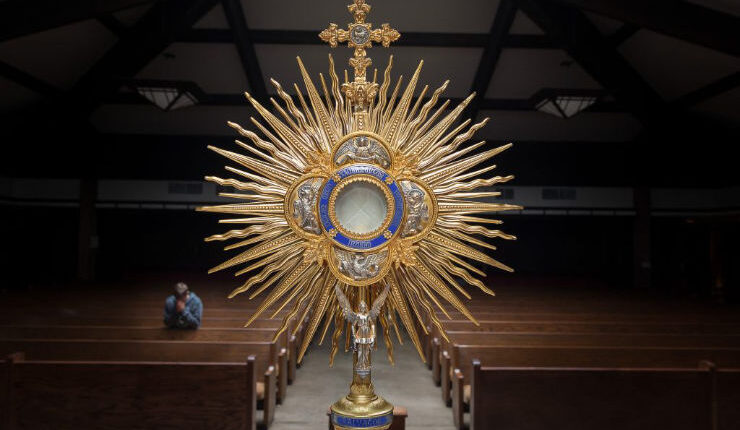 The Catholic church believes that the Holy Eucharist is the sacred body and blood of Jesus Christ. In the Eucharist, our Lord Jesus Christ is wholly and entirely present. Many people know this but like the Jews who ask Jesus how can He give them His body to eat, they doubt if this is real.

This was the problem that A German priest known as Peter of Prague encountered. History has it that this priest was not comfortable with the way people relate to the spiritual.

At that time there was an increasing rate of apathy towards God. Many Christian faithful lose faith every day and even lack some reverence for the Holy Mass. Because of the rate of immorality in his time, Peter of Prague strived towards living a holy life. People see Him as a pious priest.

The only problem that this priest has is the doubt in the Eucharistic presence. Fr. Peter Prague was troubled with the reality of the presence of Jesus in the consecrated hosts and wine. It was His encounter with Jesus in the Eucharist that led Pope Urban IV to institute the Feast of the Corpus Christi (feast of the body and blood of Jesus Christ).

Many people who are close to him, narrate how he spent some quiet moments asking how the sacred hosts he consecrates could turn to the body and blood of Jesus Christ. This deeply troubles the holy priest.

Before this, the fourth Lateran Council in 1215 has taught about the Eucharistic presence and used the word transubstantiation to explain this. Yet tons of doubts fill the mind of Fr Peter. He sometimes asks Himself “can this be true? In His private prayers, He always prays to God to help His unbelief.

Then In 1263, Peter Prague went on a pilgrimage to Rome. It was during this pilgrimage that he had an encounter that changed His Life.

During this pilgrimage, He stopped at a town known as Bolsena and decided to celebrate mass at the tomb of St Christina the next day. Immediately he began to say the prayers of consecration, blood began to drip from the Hosts and stained the corporal at the altar.

This Eucharistic Miracle surprises Fr Peter of Prague. He became confused about whether to continue or stop the mass. At this point, he could not say what was happening.

Because of this great mercy that Jesus granted to him to believe truly that He is present in the Holy Eucharist, the priest began to shed tears at the altar. He could not believe His eyes that such could happen. Then with tears, Fr. Peter interrupted the mass and announced to the people what happened. The congregation also was filled with awe. Many of them who saw what happened began to cry and ask God for mercy. Then He continued and managed to end the mass but with tears all over his eyes.

After the mass, he asks that they take him to Pope Urban IV who is living just a few miles away in the neighbouring city of Orvieto.

When Fr Peter arrived at Orvieto, he explained in detail to the pope what happened. He showed the consecrated host to the pope, which he wrapped in the corporal and then wrapped in another linen. The pope heard his account of what happened, absolved him and ordered an immediate investigation.

The pope made sure that all the facts about the miracle had been ascertained. He then declares that truly a miracle occurred. Pope Urban orders that the bleeding host and the blood-stained corporal be brought to Orvieto.

Then it is one year later, in the year 1264, that Pope Urban IV instituted the feast of Corpus Christi, to recognise the true presence of Jesus Christ in the sacred Hosts.

The pope then commissioned Saint Thomas Aquinas to compose a Mass and office for the liturgy of the hours in honour of the Holy Eucharist. This is why we have such beautiful hymns like O salutaris Hostia, Tantum ergo, Panis Angelicus and Pange Lingua.

Till today, the linen bearing the spots of blood is still in the Cathedral of Orvieto. People travel from far and wide to come and see it. Also, the bloodstains are still visible on the floor of the Church of St. Christina. This Eucharistic miracle becomes a turning point in the life of the priest.

The relics are still there till this day and many Christians today go there for pilgrimages. Also, the blood-stained corporal, as well as the fragments of the bleeding Host, are still in the Cathedral of Orvieto.

This Eucharistic miracle is one of those miracles that led to the strong belief in the presence of Jesus Christ in the Eucharist.

Saints Who Receive the Stigmata of Our Lord Jesus Christ.

This is How Jesus Loves You. Monday 18th Week Ordinary Time

Do Not live in Fear. Tuesday 18th Week Ordinary Time of the Year