Life of Saint Tarsicius. Thursday with the Saint 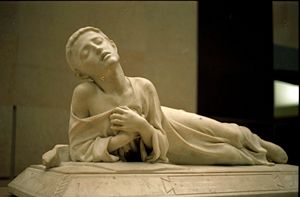 Tarsicius or Tarcisius was born in the age of Christian martyrdom a martyr of the early Christian church who lived in the 3rd century. The little that is known about him comes from a metrical inscription by Pope Damasus I, who was pope in the second half of the 4th century.

Tarsicius was an acolite or perhaps a deacon at Rome. He was accosted and beaten to death on the Appian Way by a mob while carrying the Eucharist to some Christians in prison. The incident is included in Cardinal Wiseman’s novel “Fabiola”, and Pope Damasus wrote a poem about it.

Saint Tarsicius was a young boy, born at time the empire was ruled over by Emperor Valerian.  He hated Christians because of their love for Jesus and his teaching. They were thrown into dirty prisons where conditions were poor, and many of them were martyred which means they were put to death for their beliefs.

How were these Christians martyred?  Some of them were beaten to death, others were burned- and most cruel of all- a number of them were thrown into a big arena called the Coliseum (which still exists today) and there they were eaten by lions.  This was like a sport to the emperor and his friends who watched this horrible cruelty and enjoyed it.

However, the Christians endured all of this rather than give up their faith in Jesus.

To avoid being captured, Christians had to meet secretly in their homes if they wanted to pray and to learn about their faith.  When the situation became too dangerous they built underground rooms and passages called catacombs, so that they could come together in safety.  To enable them to celebrate Holy Mass in secret, they had to build large rooms below ground called crypts where they also buried their dead.

The entrances to the catacombs were concealed and they were usually in isolated spots outside the city known only to the Christians.  These same catacombs still exist today and can be seen by visitors to Rome.

It was there they gathered to pray, to study their faith and to hear Mass and receive Holy Communion.  This was possible due to the courageous bishops and priests who risked their lives so that the people could receive the Body and Blood of Jesus in the Eucharist.  No matter how careful the Christians were in protecting the knowledge of the entrances to the catacombs, sometimes the pagans did discover them.  Hence, a great number of Christians were caught or put in prison, where, each day, they expected to be put to death.  Despite their sufferings they continue to desire to receive Jesus in the Eucharist.

One day, just as the Bishop was about to celebrate Holy Mass in one of the catacombs, he received a letter from the prisoners- among whom were some of his fellow bishops and priests- requesting him to please send Holy Communion to them.  They knew that if Jesus was with them, they would be less fearful and would gladly accept a martyr’s death for love of Him.  This posed a problem for the Bishop knew it was very dangerous to take the Holy Eucharist to prisoners and to the sick.

Before beginning Holy Mass, the Bishop asked the people present to pray that he might choose the best person to carry Jesus in the Eucharist to the prisoners.  As it was now too dangerous for priests to do so, it was important that some other good person be selected who would not arouse suspicion.

As soon as Mass was over, the Bishop asked who would be willing to carry out this brave task. The young boy Tarcisius- an altar server- stood up and said, “send me.”  The Bishop thought the boy was too young and could be endangered, but Tarcisius convinced him that nobody would suspect him simply because he was so young. All the Christians knew of the deep love Tarcisius had for Jesus in the Eucharist, so the bishop eventually accepted the boy’s offer.

Tarcisius was given some hosts carefully wrapped in a linen cloth and place in a small case which he wrapped in his tunic over his heart.  The Bishop asked him to remember the heavenly treasures that were being entrusted to his care; to avoid the crowded streets and to faithfully and safely protect these sacred mysteries, Jesus in the Eucharist.  Tarcisius replied that he would rather die than let go of them.  Clasping his Sacred Treasure, he set off for the prison.

-a sister of Notre Dame takes up the story from here-

Oh how happy and proud Tarcisius felt as he carried Our Blessed Lord so close to his heart!  He had no thoughts to spare for places or people that he passed.  He thought only of Jesus, whom he carried.

“Oh, dear Jesus, how I love you,” he whispered.  “How good you are to choose me as your little messenger.  How willingly I would suffer and die for you, like these good people in prison.  Perhaps one day you will let me lay down my life for you too.”

Whispering words of love like these he sped quickly on his way.  He was out of the catacombs now and on the high road.  There he passed a group of his school comrades just about to start a game, but needing one more to complete the number to make up the team.  Catching sight of Tarcisius they called him to stop and join them.

“I am sorry,” he said, “but I am on an important message.”  He hurried on, but the lads caught hold of him and would not let him go.

“What have you there?” said one, seeing how tightly Tarcisius held his hands to his breast.  “Let me see.”

“No, no,” cried Tarcisius, struggling to free himself.  His anxiety made them all curious, and together they tried to pull away his hands.

“My Jesus, strengthen me,” whispered Tarcisius almost under his breath.  But one boy heard his words and cried out to the others: “He is a Christian.  He is hiding some Christian mystery there.”

This made the boys still more curious.  They determined to see for themselves, so they struck him, stoned him and kicked him and did their best to pull away his hands, but they could not make him loosen his grip..

A man passing by asked what was the matter.  “He’s a Christian, carrying some Christian mystery, and we’re trying to get it from him,” cried one of the boys.

“A Christian, did you say?”  Said the man, and giving Tarcisius one cruel blow, threw him to the ground.

At this very moment, a soldier, hastening towards the group, scattered them to right and left, and stooping down, and lifted Tarcisius in his arms.

“You cowards!”  he said; “all setting on one little lad,” and he strode quickly down the street and hurried off into a quiet lane.

“Tarcisius, lad,” he said, smoothing back the curls from his pale face.  Tarcisius opened his eyes and recognised the soldier as a Christian whom he had often met in the catacombs.

“I am dying,” he said, “but I have kept my God safe from them.”  And he handed his precious treasure to the soldier, who placed it reverently inside his tunic.  “Carry Him to the prison for me,” said Tarcisius, and with a gentle sigh he fell back into the soldier’s arms.  His little soul was already with God, for whom he so willingly had given his life, for Jesus himself once said, “Greater love than this no man has, and then that a man lay down his life for his friend.”

Little Tarcisius gave his life for the Friend of friends, Jesus Christ

Saint Tarsicius was originally buried in the Catacombs of San Callisto and the inscription by Damasus was placed later on his tomb. Sometime later his relics were moved to the San Silvestro in Capite church in Rome.

Saint Tarsicius is the patron saint of altar servers and first communicants.

Saint Tarsicius feast day is celebrated on 15 August; that day is widely observed as the Feast of the Assumption, therefore he is not mentioned in the General Roman Calendar, but only in the Roman Martyrology.

The first five lines say that both Stephen (the protomartyr) and Tarsicius are equal in merit, and Stephen’s death (as recorded in the Acts of the Apostles) is retold poetically. The last four lines can be translated as:

who was carrying the sacraments of Christ,

to display them to the profane,

he preferred to be killed and give up his life rather than betray to rabid dogs the heavenly body.