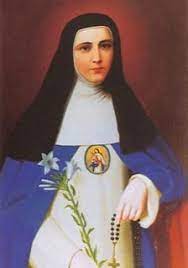 LIFE OF ST MARYANN OF PEREDES OF JESUS

Little is known about this saint but History have it that she was the first person to be canonized from the present-day Ecuador.

St. Maryann of Paredes of Jesus was a recluse who sacrificed her life for the salvation of her city. 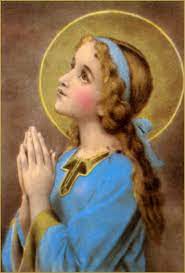 St. Maryann of Paredes of Jesus became an orphan at age four and was taken in by her older sister Jeromira who later gave her out to marry Cosme de caso. She lived a secluded life style which often time, she was compared to Rose of Lima.

She was refused entry into the monastery, despite urging her brother in-law and her husband. She subjected herself to bodily mortification, with the aid of her servant a native of India.

St. Maryann of Paredes of Jesus spiritual life was closely connected to the Jesuits, but at the suggestion of her spiritual director. She became a member of the third order of St. Francis.

St. Maryann of Paredes of Jesus subjected herself to bodily mortification with the aid of her servant a native of India. It was reported that MaryAnn kept a strict fast that she took an ounce of dry bred every eight to ten days.

According to testimonies from eye witnesses, the Holy Eucharist which she received every morning at mass, sustained her life as in the case of saints Catherine of Siena and Rose of Lima.

St. Maryann of Paredes of Jesus possessed an ecstatic gift of prayer which was able to make her predict the feature, see distant events as if they were close to her.

St. Maryann of Paredes of Jesus also reads the secrxets of hearts, cure diseases by mere sign of the cross or by sprinkling the sufferer with holy water, an at least restored a dead person to life.

St. Maryann of Paredes of Jesus during the 1645 earthquake, and subsequent epidemics in Quito, she publicly offered herself as a victim for the city and died shortly thereafter.

Immediately after MaryAnn’s death, a pure white lily sprung up from the bloods, blossomed and bloomed, a prodigy which has given her the title of the Lily of Quito.

She also a natural heroine to the Republic of Ecuador.

St. Maryann of Paredes of Jesus was declared a saint by Pope Pius XII in the year 1950. 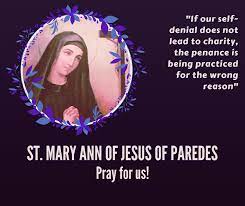 “If our self-denial does not lead to charity, the penance is been practiced for the wrong reason”

PRAYER TO ST MARYANN OF PAREDES OF JESUS 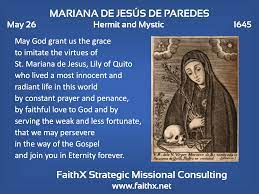 May God help us to imitate the life style of his Saint, Maryann de Jesus de paredes. God bless you and have a lovely week. 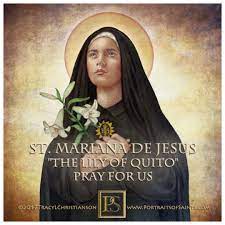 In Times of Trouble Who is Jesus to You? Thursday 6th Week Ordinary Time

What does it profit a man to lose His Soul? Friday Week 6 in Ordinary Time