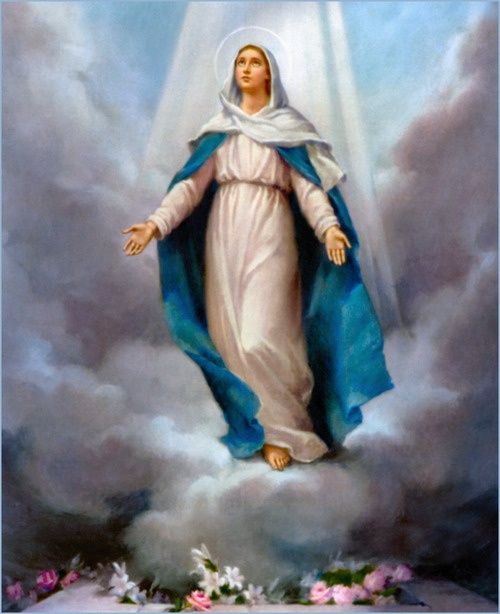 Breakfast with the Word

Assumption is a Marian dogma proclaimed by Pope Pius XII in the year 1950. Though today’s solemnity had been a part of the Church’s spiritual and doctrinal patrimony for centuries.

Today’s feast is simply a consequence of the Immaculate conception and the Divine Motherhood of Mary. For it was not fitting that the flesh that had given life to God himself should ever undergo corruption. Being with Jesus on earth, it is also fitting for Mary to be with her Son in heaven. So the Assumption is God completing His work on Mary.

Pope Pius XII, on November 1, 1950, in the Apostolic Constitution Munificentissimus Deus,  proclaimed the Assumption of Mary a dogma of the Catholic Church in these words: “The Immaculate Mother of God, the ever-virgin Mary, having completed the course of her earthly life, was assumed body and soul into heaven.

Today’s solemnity  traces its roots back to the earliest years of the Church, dating back to the apostles themselves.

So many stories have revolved around today’s feast but the truth that remains is that the body of Mary is nowhere to be found. Some people reported that when the news of the death of the mother of Jesus was heard, some of the apostles came to have her buried but to their greatest surprise, there was no sign of the body.

Another tradition holds that a tomb of Mary existed outside Jerusalem but the earliest Christians maintained that “no one was there,” a few moments after it was laid.

The disappearance of the body of Mary became a mystery till today. Because of this, only a feast known as the “Memory of Mary” was celebrated and marked only in Palestine, and later extended to all the churches of the East.

In the seventh century, it began to be celebrated in Rome under the title of the “Falling Asleep” (“Dormitio”) of the Mother of God. Soon the name was changed to the “Assumption of Mary,”.

At the Council of Chalcedon in 451, when bishops from Constantinople gathered, Emperor Marcian asked the Patriarch of Jerusalem to bring the relics of Mary to Constantinople to be kept, The patriarch explained to the emperor that there were no relics of Mary in Jerusalem, that “Mary had died in the presence of the apostles; but her tomb, when opened later . . . was found empty and so the apostles concluded that the body was taken up into heaven.”

What was clear from the beginning was that there were no relics of Mary to be venerated, and that an empty tomb stood on the edge of Jerusalem near the site of her death. That location also soon became a place of pilgrimage. (Today, the Benedictine Abbey of the Dormition of Mary stands on the spot.)

The appearance of the woman clothed with the sun who bore a son that will rule the world with an iron sceptre has been interpreted as the Mother of Jesus Christ, the Blessed Virgin Mary.

John begins the first reading by calling the woman a great sign. Let us be reminded that John’s writings are known with signs.

The same John in His gospel refers to Mary, the mother of Jesus, as woman at the wedding feast at Cana (John 2:1-5), and also the Cross (John 19:25-26), and today in Revelation 12:1. Thus referring Mary as the Woman who will bear the seed that will crush the head of the serpent (Genesis 3:15).

Secondly, When the angel appeared to the Blessed Virgin Mary, His greetings was “Do not be afraid, Mary; you have found favour with God. You will conceive and give birth to a son, and you are to call him Jesus. He will be great and will be called the Son of the Most High. The Lord God will give him the throne of his father David,  and he will reign over Jacob’s descendants forever; his kingdom will never end.”

The mother of this child who is to rule as shown in the first reading is the Blessed Virgin Mary,so the disappearance of her body on earth and then appearance in heaven is a confirmation that she was assumed into heaven.

Mary As the Ark of the Covenant.

The first reading of today started with “That the sanctuary of God in heaven opened, and the ark of the covenant could be seen inside it”. Let us digest this.

1. In His great love God chose to remain close to His people in a special way. God instructed Moses “to build a tabernacle surrounded by heavy curtains (cf. Ex 25-27). Within the tabernacle he was to place an ark made of acacia wood covered with gold inside and out.

Within the Ark of the Covenant was placed a golden jar holding the manna, Aaron’s rod, and the tablets of stone  (cf. Heb 9:4).”

These three signs prefigured the Presence of Jesus Christ, harboured by an ark. God fed the people with Manna and in John 6.51, Jesus said I am the bread which falls down from heaven.

(ii) Aaron’s rod represents His priesthood ((Numbers 17:8)) and Jesus is the High priest of the Most high God.  Hebrew’s 4:14-16 says “Therefore, we have a great high priest who has ascended into heaven, Jesus the Son of God”.

Secondly,  In the culture of the Israelites,”the rod (Hebrew: מַטֶּה‎ maṭṭeh) was a natural symbol of authority, as the tool used by the shepherd to correct and guide his flock (Psalm 23:4)”, and in John 10:11, Jesus says “I am the Good Shepherd”.

These Old Testament figures prefigured the Messiah in the New Testament. The Ark that harboured the saviour in Her womb is no other person than the Blessed Virgin Mary.

“When the ark was brought back in 2 Samuel 16, there was great joy and when David approached the ark he danced with joy in front of the ark. He was wearing an ephod, the clothing of a priest.

In today’s gospel when Mary, the Ark of the New Covenant, approached Elizabeth, John the Baptist leapt in his mother’s womb. Like David, John was also from the priestly line of Aaron”.

In the same 2 Samuel 16, David being overwhelmed with Joy said “How can the ark of the Lord come to me?” In today’s gospel Elizabeth uses almost the same words: “Why is this granted me, that the mother of my Lord should come to me?” This points to deeper mystery and parallel.

Her yes to the message of the Angel brought Joy to the world through the birth of the Messiah.

Her Presence at the wedding at Cana in John 2, made the impossible happen even when the hour of the Lord has not yet come, and her intercession brought back joy again to the wedding guests.

In Luke 11, someone who heard Jesus preaching, confirms that Mother Mary is blessed. In the same way, she disseminates this blessings to her children who come to her.

The implication of the Assumption

The assumption of the Blessed is a confirmation that the Blessed Virgin Mary was not conquered by death nor corruption. She is still living to continue Her intercession for those who run to her, the depressed, those who have lost faith, the marginalised, the suffering, the sick , the downtrodden etc.

In her intercessory role, she has continued to appear in different places bringing people back to God. Let us also seek for her maternal intercession that our joy will be complete.

By keeping herself pure and devoted to God, God exalted her and saved her from corruption. She teaches us to desire holiness of life.

The Assumption also points to the reality of eternal life.

If Jesus Christ cannot abandon her and allow her to undergo corruption, it reveals that the bond between them is everlasting. It also indicates how powerful her intercession would be.

Let us always run to her in our times of temptation and distress. She is a refuge of sinners and mother of sorrows.

May mother Mary intercede for you today. Amen

We solicit all readers of the breakfast of the word to support in any way for the maintenance and renewal of the website. Whatever we get can be of good help.  I can then make it up to ensure the word of God keeps going.

The Fire that Jesus Brings. 20th Sunday Ordinary Time of the Year C

This is the Wealth We Must Seek. Tuesday 20th Week Ordinary Time