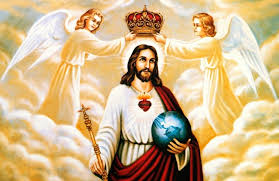 The feast of Christ’s the King marks the end of the church’s liturgical year and the dawning of Advent season. Owing to this fact, the message of this feast is clear, CHRIST IS THE BEGINNING AND THE END, THE ALPHA AND OMEGA. NOTHING COMES BEFORE HIM, HE IS BEFORE ALL THINGS AND IN HIM EVERTHING HOLDS TOGETHER at the end, everything goes to Him. The second reading and the gospel capture this very clearly. He is and should be the first in everything we do.

The aftermath of the World War 1 plunged the world into economic, social and spiritual downturn. Hunger, intimidation, lapse in faith, exploitation, ravaged the world. This led many Christians to question the power of God, and as such faith was affected and subjected to scrutiny.

At this time, secularism was on the rise, and many Christians, even Catholics, doubted Christ’s authority, reality and existence. The also world witnessed the rise of dictatorships in Europe during this period; moral decadence was also on the increase.

The Feast of Christ the King was then instituted during this period when respect for Christ and the Church was waning. Many rulers began to assert their power and superiority over the people.

Pope Pius XI instituted the feast in 1925, as an answer to the world that had already been ravaged by the First World War and deeply affected by exploitative consumerism, nationalism, secularism, and new forms of injustice. The feast was created in the midst of this political tumult through Pope Pius encyclical Quas Primas.

Pius hoped that institution of the feast will see that all nations would see that the Church has the right to freedom, and immunity from the state (Quas Primas, 32), that that leaders and nations would see that they are bound to give respect to Christ (Quas Primas, 31).That the faithful would gain strength and courage from the celebration of the feast, as we are reminded that Christ must reign in our hearts, minds, wills, and bodies (Quas Primas, 33). These then negated  the nepotic and nefarious leadership style at this time.

The first reading of today presents an image different from that of the gospel. In the first reading, the Israelites having seen how God has worked through David and the power and authority that led him although his battle came with an unanimous decision to make Him their king but there was rather a mockery and rejection of Jesus Christ as the King in the gospel.

Kings are adorned with crowns but Jesus’ kingship is mocked with crown of thorns. The Jews historically are known to fight for their inheritance and rights. If the Jews really take Jesus as their King, they wouldn’t have allowed him to die such a shameful death. The kingdom of Jesus Christ is a kingdom of opposite, totally different from what the world can give.

Like the first reading and gospel relative analysis, today we tend to worship man, We tend to believe that our protection, life, shelter, food etc can comfortably come from the hands of men, not knowing that the one who actually owns it is the one hanging on the cross, the one we do not normally have time for.

The kingship of Jesus has always been the opposite. We render obedience to earthly authorities, to the extent we can do even the positives and negatives that come from their orders, but we totally neglect anything about God. Many today even see themselves as higher than God even, fight everything about God and His ministers. The kingdom of Jesus is the one rejected but it is still the real kingdom, where everything starts and everything must go. The second reading testifies that it is only though him that we will have redemption.

Secondly, Jewish rulers know exactly what their kings do, earthly kings are self-centered, selfish, exploitative and greedy etc they were expecting Jesus to do same; to save himself first, rather Jesus sacrificed himself for all, even the repentant thief shared in this salvation. Jesus is a King because but his kingdom is totally at odds with any display of power in this world.

Jesus conquered through the cross and not through manipulation and rigging. Some people like to dominate others, abuse their power, and manipulate others. But that has no place in Jesus’ kingdom. Those with power can unfortunately abuse their power in so many ways but Jesus is totally powerless on the cross; he cannot even save himself, “He saved others, let him save himself if he is the Christ of God.” (Luke 23:35).

The values in Jesus’ kingdom are service and humility. If we want to be great we must be like children (Luke 18:17). We are to carry our cross after Jesus every day (Luke 14:27). There is no place for violence or retribution in Jesus’ kingdom.

Jesus as the Model

Jesus did not abuse power; He is an example to those who abuse power. There is no envy or greed or lust for power in Jesus. In many ways we see that Jesus’ kingdom is totally at odds with any display of power in this world.

Jesus kept company with tax-collectors, sinners and prostitutes, so much so that the authorities described Jesus as “a glutton and a drunkard, a friend of tax-collectors and sinners.” (Luke 7:34) You would expect kings to receive important people and dignitaries but Jesus received the lowly and rejected people of his time.

A king might expect to receive a gift but Jesus gave gifts, he restored health to those who were sick. Jesus was not the kingly type according to our understanding of king; he is a powerless king! Kings wear a crown. What sort of crown did Jesus wear? It was a crown of thorns. What throne do we see Jesus sitting on in the Gospel today? (Luke 23:35-43) It is the cross. Instead of an army there were people beneath his cross asking him to come down if he was indeed the Son of God (Luke 23:35). So Jesus’ idea of king and power is totally opposite to the world’s idea of a king and power.

The King’s Citizenry represents his Glory.

Kingdom citizens are to reflect the character of their King, who is righteous, just, benevolent, compassionate and full of glory. Every Christian is part of this citizenry and has to live according to the dictates of this kingdom.  The kingdom of God does not conform to the standards of this world (John 18:36; Romans 14:17).

We are not of the world though we are in the world. A king is king by birthright. His kingship is not conferred by men.  We do not make him king, all we can do is acknowledge that he is king. When the king speaks, he speaks with absolute authority.

No one can countermand his orders, negate his pronouncements, set aside his decrees, or amend his statutes. A king’s decree is unchanging. This conforms to Mary’s advice in John 2 to “do whatever he tells you”. The word of God is binding for every Christian. It is not an option but an obligation for all.

The celebration of today is a comfort to those in difficulties that Christ is still the king, every other adversity bows before him. The feast is a lesson to earthly authorities and many who occupy different positions.

The feast is an exhortation for us, in our day to day interactions with people, that we do not lord it over to ourselves. The main exercise of authority is not intimidation but the opposite; which is authority of service.

The celebration is also a message for all of us to acknowledge Jesus Christ in everything we do. He is truly the King of Kings. A king has ultimate control of everything within his domain, so Jesus has absolute authority and power over all things, in Him all things dwell.

Jesus promised the repentant thief a place in his paradise, which is a sign that everyone has a final destination. Every position, authority, possessions etc are temporary.  Jesus is the final destination. No earthly kingdom lives forever.

May God give us the grace to live by the dictates of this message. Amen, God bless you.

LOOK UPON THE HOLY FAMILY