A Kingdom that Divides Against Itself. Monday Third Week Ordinary Time 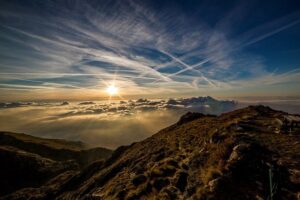 At the end of every month and every year, we see people clogging into prayer centres and ministries claiming blessings and shouting for divine upliftment.

It is no longer a new thing that churches and ministries are always massively brimming with an innumerable number of people looking for miracles.

The problem is that yet the same people will go home with hearts filled with hatred, jealousy, wickedness and betrayal for someone living with or around them.

Today, families don’t trust each other again. A partner prays for restoration but cheats and makes the family a wrestling arena for his or her spouse. How do you expect to progress in that family?

A mother and father hide their net of income from each other and do not trust each other, how would you expect progress? A family will be praying for a family breakthrough but yet they are wallowing in the division and constant dissensions among themselves, how will the family stand?

An organisation will be praying for progress but still, they are into a serious internal tussle, how will the organisation progress? A family, association, organisation etc that is divided against itself can never stand. Unity is strength.

The Word of God is Salvific. 3rd Sunday Ordinary Time of the Year C

A Kingdom that Divides.

The gospel of today is a continuation from that of Saturday when Jesus’ relatives think that Jesus has gone out of his mind because he refuses to eat and take a rest.

While that was going on, some of the scribes and elders who came down to Jerusalem, and who may be among the crowds that came to see Jesus joined Jesus’ relatives to talk ill of Him.

The relatives of Jesus, seeing how Jesus refuses to have a rest, said that Jesus has gone out of His mind but these scribes accuse Jesus of being possessed with the Spirit of Beelzebub.

They were saying that ‘Beelzebul is in him and, ‘It must be through the prince of devils that he casts devils out.’

A little critical analysis here will see that these scribes went far in their accusation. The relatives of Jesus are only concerned about how he would eat and rest, what concerns Belzebub with that? But we can see in these scribes envy, hatred and jealousy for Jesus.

What has eating and resting do with the power in which Jesus works. We can see that they are so envious of Jesus.

The scribes have seen that they are also in positions of authority but there is something that Jesus has that they don’t have.

They do not have in them that power to do the work that Jesus does and instead of praising God for that or asking Jesus to teach them the way, they accuse Jesus of working with Belzebub. This is all about envy.

Whenever we see that there is something that someone does or has that we do not have there is always the temptation to become envious of that person. This then causes division among us. A kingdom that divides against itself can never progress.

When we see something in another person, what the person needs is our encouragement and support. What he/she does can still benefit you. A kingdom that divides against itself is due to a lack of understanding of the importance and need for unity among our Christian brethren.

Like the scribes, sometimes, we accuse people and say negative things about them behind their backs.

Sometimes those things we think about the person are very far from the truth. Until we get close to the person, we will understand that most of the negative conceptions we have about someone are not true.

Therefore, a kingdom that divides against itself will always accuse each other of what they may be innocent of.

If A Kingdom divided against Itself.

When the scribes accuse Jesus of working with Beelzebub, Jesus calls them to him and speaks to them in parables.

Jesus asks them ‘How can Satan cast out Satan? If a kingdom is divided against itself, that kingdom cannot last. And if a household is divided against itself, that household can never stand. Now if Satan has rebelled against himself and is divided, he cannot stand either – it is the end of him. But no one can make his way into a strong man’s house and burgle his property unless he has tied up the strong man first. Only then can he burgle his house.

1. The first lesson we have to learn here is how Jesus confronted them immediately. Jesus knows what they have in mind but instead of bearing grudges or thinking on how to deal with them, Jesus calls them to himself and begins to admonish them.

In the same vein, if a kingdom is divided against itself, there is a need to bring them closer again. There is the need to admonish those who are causing the problem.

When we discover that someone is saying or has said something negative about us which is not true, do not go about thinking about how to deal with the person.

Do not go about bearing grudges. It is better to call the person and confront him or her immediately. Advise them to stop such kind of life.

2. When Jesus says a kingdom divided against Itself cannot stand. Jesus says categorically that if Satan rebels against itself, he cannot stand. It is the end of Him. Therefore, the easiest way to downfall is division.

Invariably Jesus is making the success and progress of any organisation, family, body etc to be intertwined with how united they are.

An organisation or family that is in crisis hardly progresses. If we want a breakthrough, as a family, the family should come together. The Igbo says “Igwe bu ike ” Unity is strength.

Any household driven by infighting will tear itself apart. Whether it is a machine, a sports team, a government party, even our body, things have to work together to work perfectly well. How good and pleasant it is when God’s people live together in unity!” (Psalm 133:1).

God commands unity among believers. Once conflict enters the midst of any assembly or entity, productivity and usefulness inevitably are affected. Then, once conflict sets in, the whole organisation  weakens and becomes vulnerable to attack.

If you cause a wound to particular part of the body, it will affect the whole body. The whole part of the body feels the pains. Let us understand this wisdom and live in peace with whoever we are living or working with.

Any Kingdom divided against Itself cannot stand. May God bless you dearest and give us the grace to overcome all our challenges today Amen.

The Wonders of the Word of God.3rd Sunday Ordinary Time of the Year A