Everything has a Beginning. Memorial of Ss. Joachim and Anne. 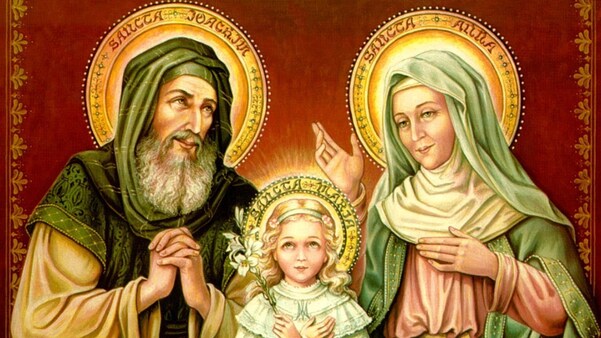 Breakfast With the Word Memorial of Ss Joachim and Anne.

Everything has a Beginning.

The Church celebrates the memorial of the parents of the Blessed Virgin Mary; Joachim and Anne. Nothing much is known about them in the scriptures.

Most of the things we know about them came from the apocryphal writings most especially the Protevangelium of James (“First Gospel of James”) and the Evangelium de Nativitate Mariae (“Gospel of the Nativity of Mary).

From these sources, Anne and her husband Joachim lived a wealthy but devout life. Despite their status, they were childless for many years which kept them restless.

This continued for many years but they never stopped seeking the help of God and asking for His intervention. Anne even promised God that if He gives them a child, they will devote the child to Him all the days of his or her life.

It was during this time that both received the vision from an angel that Anne will bear a wondrous child. So, the birth of the Blessed Virgin Mary was seen as miraculous and brought great joy to the family.

When She was three years old, the parents of the Blessed Mother brought her to the temple of Jerusalem, where she grew up in the service and fear of the Lord. Hence, the journey of our salvation has a beginning, which began with the birth of she who is to bear the Messiah Jesus Christ.

This became possible through the family of Joachim and Anne. They are the grandparents of Our Lord Jesus Christ and today serve as the patron of all the grandparents. So, everything God does in our lives has a beginning. We may not know God’s intentions at the moment but as time goes on, you will. This is also in consonance with today’s gospel.

Everything in Life has a Beginning.

Have you been in a situation where you want to begin something but the fear of how it will progress always dares you to the face? Or have you felt like impacting a change but you feel like you do not have what it takes to make it happen, or there are others better than you do?

Have you begun something already but you do not know whether it will progress or not? Have you prayed and it looks as if God is yet to answer or the thing you prayed is not yet to what or how you want it?

If the answers to the above questions are true then today’s gospel is for you. Today, Jesus again compares the kingdom of God to a mustard seed that someone took and sowed in His field.

Although the seed is small yet it grew to the greatest of shrubs. He also compares the kingdom of God to a little yeast that a woman mixes with flour yet it leavens. The truths of today’s message are:

1 . Everything in life has a beginning. Then there is a moment of growth and then the end. The mustard seed does not begin immediately as a tree. It begins as a seed.

The leavened bread begins as a yeast. Every human being starts as a baby, and every great achievement today starts as an idea.

This is the reason we create problems for ourselves. Let us always know that there is no rush in life. For the Messiah to come, God has to, first of all, prepare a womb that will carry Him. Hence, the family of Anne and Joachim gave us a wonderful mother, our beloved Mother Mary. Hence, God teaches us that life has a step, and we must climb the steps gradually.

The End May Surprise You.

The mustard is small but later grew to one of the biggest shrubs. The small yeast that was mixed with the flour later made a great impact.

So, despite how small what we think we have or can do if we put it at work we may not know the huge impact it might create.

1.The mustard seed and the yeast were small but their impacts were great. Jesus is a true example of this. To preach the good news, Jesus begins with only 12 apostles. After this, He appointed more 70 others (Luke 10:1).

Today, what started with only 12 apostles has reached the ends of the earth. Despite how small what we think we can do is, there is always an end and we may never know how the end may become.

People may even criticise you but always know that even the beginning of the world began in chaos. Everything was without form and void until God began to set things in order.

Whenever you want to begin or do something, always know you may have criticisms, challenges, but trust the process and never give up.

In the parables, the mustard seed was sowed. Though there was a seed, it was not left to decay. It was sowed. The yeast was used and was not abandoned to depreciate. Inside us are seeds of greatness. Despite how small we think the seed is, we have to put it at work.

We have to sow the seed for it to germinate and grow. We have to mix the yeast for it to leaven. This might involve your time, your effort, your energy, your initiative, your plan. This is where the major work is done.

There is always a problem when we leave the sowing to look at the reaping. Put your ideas at work until the seed begins to germinate. You will then see the fruits of your labour. The time of sowing can take years even but the main thing is that you know where you are going.

So, being idle, lazy and doing nothing will never bring forth something good. Relaxing in our comfort zones will always keep us the same. We have to come out.

Secondly, when we sow the seeds of goodness, kindness etc no matter how little, we may never know the deep impact it may create over time.

When you touch souls with that little thing you can do, you may never know the extent it will grow over time. So let us sow now and nurture it. Whatever you sow, must surely grow over time if you are consistent.

Do Not Limit What God Can Do.

There is An Enemy Within

The Reason the Word of God may not bear Fruit in Us.

The How is not Your Function to Determine.

One thing we would like to notify here is that how the mustard seed grew was not known. Also, how the yeast grew was not indicated. What we know is only about the sowing and the mixing of the flour.

This is because the seeds have already a life force to make it happen. How we grow is beyond our human reasoning but all we know is that we eat every day, and the growth hormones do their work even while we sleep.

So, in whatever we do, we have to know that everything has a beginning. Therefore, begin to do something, do the much as you can, trying to extend our tentacles, and being consistent. God will do the remaining ones.

Like Paul says ” I planted the seed, Apollos watered it but God granted the increase. (1Cor 3:6) Do the best you can and God will do the rest. No one in life became what He is today without the time of early beginning. Everything has a beginning. Let us begin first.

Also, never forget that there is an end to everything. The seed became a tree, the yeast became a leavened bread. So never give up on the way. And never underrate anyone yet. There is always the future.

May God bless you, and guide us to work for the salvation of souls. May He continue to inspire you to fulfil your destiny. Amen.

5th Tutorial: How to Add Images, Links and Videos to Blogs

Everything has an End. Tuesday 17th Week Ordinary Time

Beside the Cross : Feast of Our Lady of Sorrows: Reflections