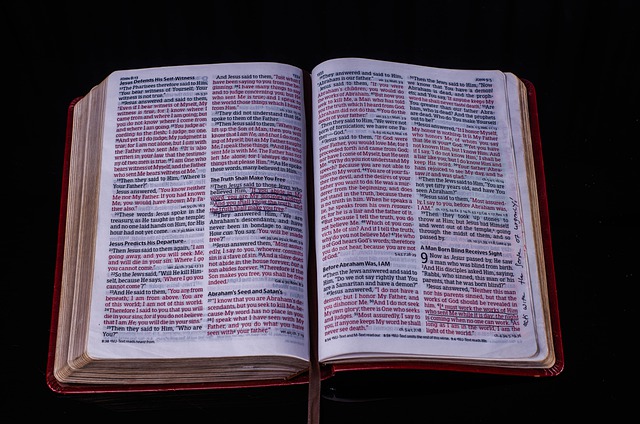 Breakfast with the Word Friday 5th Week of Lent Year B

In the Gospel of John 10:31-42, the effort of Jesus to convince the people to understand who He is leads to more misunderstanding.

Instead of believing in Him, they take up stones to attack Jesus. They accuse Him of blasphemy. The Jews say that Jesus is trying to make Himself God. They see Jesus as a man and accuse Him of making Himself equal with God.

Instead of accepting Jesus, the Jewish authorities make trouble with Him.  In today’s gospel of John 10:31-42, the Jews also try to arrest Him but Jesus escapes from them. So, instead of allowing His words to bring them to repentance, they allow themselves to sink into animosity.

As the Holy Week approaches, the Church recalls those encounters that led to His suffering, crucifixion and death.

What We do When We Do not Truly Know Jesus

The Annunciation of the Lord: Ten Lessons to Learn

If We Keep His Word

When We Do Not Have Faith; Tuesday of the 5th Week of Lent

Do Not Be The First to Cast Stones

The Word That We hear.

In this gospel of John 10:31-42, Jesus takes His time to convince the people to come to repentance and believe in Him.

The only crime Jesus committed was that He wanted the people to come to the knowledge of the truth. But He was misunderstood and attacked. Sometimes how we take the word of God is how it will work in our lives.

The Jews hardened their hearts, and the word did not touch them. The Jews misunderstood Jesus. The reason is that they have already a preconceived idea about Him. So whatever He is saying is not sinking in their hearts.

In the same vein, many Christians already have a preconceived idea about God. When God seems not to work that way, they become angry and lose faith even.

Many see God as the God of the eleventh hour, the miracle worker, the Master of impossibility, which are also true, but we forget to see God as one who works the way He wants. He works according to His will and not according to our will.

The funny part is when God works according to His will, we begin to lose faith. The word that we hear is supposed to help us to come to a knowledge of God. When we come to know Him, we will understand that we have to trust Him in everything.

Do not neglect the word of God or choose the things to believe and the ones we are not to believe.

2.There also times we think that what we believe is how life is. When someone tries to bring us to the knowledge of the truth, people misunderstand him and attack him.

The word that we hear should lead us to repentance and change of heart. We do not hear only to analyze the preacher and score Him. We hear the word and allow the word to change us.

3. Like the Jews today in the gospel of John 10:31-42, there are also times when we allow what we hear to cause animosity rather than to change.

You went to the church and luckily for you, the homily of that day speaks directly to you and the way you live your life. Instead of thanking God for the word of the day, you become angry with the preacher or the priest.

You are a leader and luckily for you, the word of that day began to reveal to you how you have not been doing well. Instead of accepting the word and living by it, you become angry with the preacher and even plan to eliminate Him.

Another example is when someone who loves you comes to you to advise you to correct the things that you do. Instead of accepting and thanking him/her, you become angry mad at him.

Anyone who tells you your limitations in secret  and takes the courage to advise you, loves you more than those who sing your praises at your face but go at the back to maim your name. The funny part here is that we do appreciate the later but hate the former.

The Works that Jesus does.

In today’s gospel of John 10:31-42, seeing how defiant the people are to His words, Jesus then points to His works. He says:

If I am not doing the work of my father, there is no need for you to believe me;

but if I am doing it, then even if you decide to refuse to believe in me,

at least believe in all the work that I do; then you will know for certain

that the Father is in me and I am in the Father.’

Despite this, the Jews still seek to arrest Him but He eludes them. Here, we can see the pains and the agony of rejection, especially when it comes from those you have helped and worked for.

Their attitude today shows that despite all the healing, feeding and miracles from Jesus, the Jews find it hard to accept Him. Instead of believing in Him, they attack Him.

1.This is not only for the Jews. There are times we also lose faith in God and harden our hearts to Him. What God is doing and has been doing for us is enough to strengthen our faith In Him.

Today we are in the Lenten season and recollecting the sufferings of the Lord. Many people today do not care about it.

We forget the suffering the Lord passed through for our sake and the only way we can repay the Lord is to neglect and forsake Him.

As Jesus is pointing to his works today, He also asks us to remember how He suffered for our sake. But, you can see that how we repay the Lord today is to harden our hearts to Him. It is painful.

2. Secondly, there are times when we face the challenges of life, we are tempted to lose faith and abandon God. We only remember to thank God when He works for us. When things go the wrong way, we hate and abandon Him.

Like the Jews today in John 10:31-42, we seem to hate God now but we forget what He has been doing for us in the past.

A song says count your blessings and name them one by one and it will surprise you what the Lord has done. That saying is true. When you consciously sit down to record and reflect on what God does for you, you will be surprised that your situation is not as helpless as you think. You will begin to appreciate all the Lord has been doing for you.

Today many are hard bent on looking for miracles and this makes them jump from one place to another thinking their blessings depend on the place they are going. They overlook many blessings God has been showering on them.

Many today are depressed and worried because of a particular sickness or problem. Because of this, some begin to hate God. We forget that the same God we are angry with has been sustaining, protecting and nourishing us.

You are crying that you do not have this or that, you forget that many are also homeless, many are bedridden and many stuck in one disability or the other.

When you cry that you do not have what others have, also remember that many want to be like you. Many want to walk like you, eat and look like you. For the fact you are alive, you are not exonerated from God’s blessings.

Thank God first for the small thing you think you have. Start now to count your blessings rather than dying in worry. So let us always open our hearts to God. He talks to us daily because He wants the best for us.

May God give you the grace to be grateful for all He has done for you. May He accompany you this day in all you do. Amen