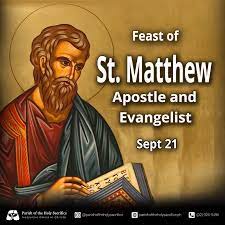 Thursday with the Saints

Life of St. Mathew the Apostle

In today’s edition of our weekly meeting with the Saint, we shall look at the life of St. Mathew. Little is known about St. Matthew, except that he was the son of Alpheus, and he was likely born in Galilee.

St. Matthew was born in Galilee, he was the son of Alpheus. Saint Matthew was one of Jesus’s 12 apostles and also one of the four Evangelists, according to the Bible. Matthew authored the first Gospel of the Bible’s New Testament, now known as the Gospel of Matthew. Prior to preaching the word of God, he worked as a tax collector in Capernaum.

The Calling of Matthew is an episode in the life of Jesus  which appears in all three synoptic gospels, Mathew 9:9-13, Mark 2:13-17and Luke 5:27-28, and relates the initial encounter between Jesus and Mathew, the tax collector who became a disciple.

The call of Saint Mathew to have appeared in the Synoptic gospels is for a lesson. It teaches us that God indeed can choose anyone and whoever he wants to work for him. It does not really matter how our past has been.

St. Mathew was one of the four gospels writers in the Bible we use today. From St. Matthew gospel, we learn of the many doings of Christ and the message Christ spread of salvation for all people who come to God through Him. The Gospel account of Matthew tells the same story as that found in the other three Gospels, so scholars are certain of its authenticity. His book is the first of the four Gospels in the New Testament.

Many years following the death of Christ, around 41 and 50 AD, Matthew wrote his gospel account. He wrote the book in Aramaic in the hope that his account would convince his fellow people that Jesus was the Messiah and that His kingdom had been fulfilled in a spiritual way.

It was an important message at a time when almost everyone was expecting the return of a militant messiah brandishing a sword.

It is thought he departed for other lands to escape persecution sometime after 42 AD. According to various legends he fled to Parthia and Persia, or Ethiopia.

According to tradition, the saint was killed on the orders of the king of Ethiopia while celebrating Mass at the altar. The king lusted after his own niece, and had been rebuked by Matthew, for the girl was a nun, and therefore the bride of Christ. 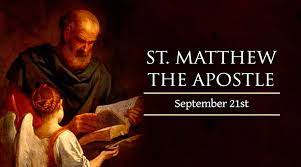 Matthew was a tax collector and is therefore the patron saint of Tax collectors, Accountants and bankers.

O Glorious St. Matthew, in your Gospel you portray Jesus as the longed-for Messiah who fulfilled the Prophets of the Old Covenant and as the new Lawgiver who founded a Church of the New Covenant.
Obtain for us the grace to see Jesus living in his Church and to follow his teachings in our lives on earth so that we may live forever with him in heaven. Amen

May God bless you dearest and may St. Mathew intercede for us all. Amen

Who does the Crowd say I am? Friday 25th Week Ordinary Time

Suffering Can Be Part of The Destiny. Saturday 25th Week

The Sin of Total Neglect. 26th Sunday Ordinary Time of the Year C