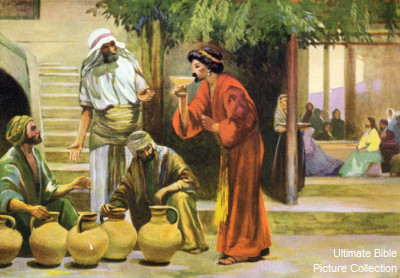 In today’s reflection I will center mainly on the gospel, the wedding at Cana which today becomes the third epiphany after the baptism of the Lord. In the first epiphany, God revealed His son to the three wise men from the east, in the second Epiphany, God revealed who Jesus is (His Beloved Son) at his baptism, and today, Jesus himself reveals his glory to his disciples through his first miracle. John selects this incident, not found in the other Gospels, to begin to reveal who Jesus is.

I will like to analyze this reading bit by bit and then do my application.

Apparently, Jesus’ family was friends (or relatives) of the bride or groom, because Jesus’ mother and brothers (2:12) were there; Jesus and his disciples were also invited. There must have been a hidden relationship not written by John. Secondly they honored the invitation because they were also invited, notwithstanding the apparent relationship. One thing one can grab from this is that Jesus and his mother honour every invitation. If you invite them, they will surely be there. If you invite them in your family, they will surely be there.  In you invite them in your life; they will take you as their son and daughter. The reminder here is that the celebrants did not invite only Jesus. This passage explains the importance of having close relationship with Mother Mary. The invitees must have been close to Mary and that’s why she was invited, no one invites anyone he sees on the road. Though Jesus was present too, her mother’s presence championed the course of the first miracle. As you invite Jesus to your heart and family, never forsake the mother.

The disciples were there also.  They may have told Jesus about the plight of the people or they weren’t observant. It was Mary who did all that. It is your mother who knew more about you, when you need something and when you are happy. Stay close to our heavenly mother, once she asks, the intercession can never be rejected. And as a mother, she knows what you need and why you need them.

It is the mother who approached him, no one with him did that, and even the disciples could not. They have not known him yet. Only the mother knows what he can do; only the mother knows his presence can change things. And only she approached him in confidence. When you don’t know how to ask him, she knows what to do; she knows the manner she will ask for it. Mary knows Jesus 100 percent more than you understand him; she is the easiest avenue to the heart of Jesus.

Secondly, I know the celebrants must have enough wine to begin the festivities, but before long they run out of wine! “A quick trip to a nearby store might solve the problem without any fuss. It is either they have enough wine but still they run out of wine or they were poor that they couldn’t provide enough wine. In this case whether you have enough in your life, challenges must surely surface one day, no one has it all, and no matter how comfortable you are in life you can never do without God. On the other hand, they may be poor to provide enough wine, which indicates if you cannot be able to make something up in your life, when there is a lack; God is always there to make it up for you. Moses has a problem with speaking, Jeremiah was a child etc, but the presence of God made everything whole.

Imagine the situation the bride and groom might be when they run out of wine, imagine the crisis, and there was no record in the chapter when they approached Mary to request for her intercession, I know they have not yet understood who Jesus is otherwise they would have run to him, that is why Jesus asked his mother if it concerns him or her? Why bothering yourself with something that does not concern you? This simply shows how kind hearted Mother Mary is, she saw them in the midst of crisis and she took it upon herself to solve this situation when no one approached her. I am even hundred percent sure that she and his son was not among the high tables considering their poor condition, but she didn’t look at those things. Imagine how loving this woman is? How many of you will take the problems of others as if it is their own, how many of us will take it upon themselves to lighten the burdens of others when they know they have something within their reach to do so? Here, Mother Mary showed the true mark of Christianity. When you invite her in all you, her kindness will overshadow all you do.

You might wonder why Mary is motivated to involve Jesus in this way. Though the text does not tell us, she probably knows that Jesus can help. This is quite different from what we see today. Some of the mothers of today will even hide their well to do sons to help out those in need, or to help out in the church or they use him as a source of intimidation to their fellow mothers to show them they are not at their levels again, but mother Mary showed something different.

Could you even imagine that Jesus would ever question the mother? For me Jesus wants to show us what faith is all about. Mary had faith, he would do it even when the hour proved otherwise, and Jesus questioned her using the hour frame. Mary is a calm and quiet woman, she didn’t shout at him that he must obey her request, but still knew quite within her that her son will never disobey her. Sometimes when you present your challenges before Jesus, he may test your faith with those same challenges. May be the more you pray, the worse the problem becomes. In this case, do not get tired, your faith in Him cannot but push him to act. In many miracles Jesus did, he first of all tried the faith of the recipients and their faith conquered. (Mark 10:48-52, Mathew 17:20, Mathew 15:21-28).

Throughout the Gospels, we see Jesus telling people on certain occasions not to tell everybody about their miracle (Mark 1:43-45; 7:36) or that he is the Messiah (Mark 8:29-30 = Matthew 16:20; Mark 9:9 = Luke 9:36 = Matthew 17:9). His hour had not yet come, and manipulating publicity would force that “hour” to come before he can train his disciples for their Kingdom work. Jesus’ eyes were clearly on his chief purpose, but he is not in a hurry. Some also interpret it that the very beginning of his ministry has not yet come. But his mother’s intercession made it otherwise. It’s almost like his mother is not listening or heeding to what he is saying, for she pushes right ahead in her quest to rescue the wedding party from disgrace. Notwithstanding, it shows the power of Mary’s intercession to change the course of events and how Jesus can never disobey the voice of his mother

Mother Mary here advises us to do what the Almighty will soon do at Mount Tabor during the transfiguration, when He says “this is my beloved son in whom I am well pleased, listen to him” listen and do whatever He tells you was addressed to the servants and the beloved apostles and invariably to all those that are the followers of Jesus. Read his word and do his word. It is doing this that the miracle occurred. Always have time with God and listen to his word. In the moment of crisis, prayers and doing what he wants you to do to lighten the situation, solves the problem. Doing and obeying his words gladden his heart.

John notes that such jars were used to hold water for ceremonial washing or purification. Before a meal, servants (or perhaps the host) would pour water over the hands of each of the guests. Mark explains the custom:

This incident illustrates at once the poverty of the old dispensation with its merely ceremonial cleansing and the richness of the new dispensation, in which only Jesus make things new and perfect.  The Law of Moses and teaching of prophets came to fulfillment in Christ. The servants, in obeying the Jesus, ‘Filled the jars with water and to the brim.” (2:7). No matter how complete you think you are, no matter how comfortable and perfect you think you are, without Jesus you are incomplete, only Jesus make things whole perfect and complete.

Secondly, the water turned to wine became the best. Water in the bible has chaotic connotations (Gen 1.4) , and imagine serving the guests with water, it looks embarrassed, but when tasted they saw it’s the best. Never look at any situation you are in now as if nothing can be done. It may look chaotic, it may look embarrassed, simply turn it over to the Mother of our Saviour she knows how to make that intercession for you. Anything that comes through her is always the best.

This is the first of the miraculous signs, Jesus performed at Cana in Galilee. He thus revealed his glory, and his disciples put their faith in him.” (2:11)

“Miraculous signs” is the plural of sēmeion, “a sign or distinguishing mark whereby something is known, sign, token, indication.” Here, “an event that is an indication or confirmation of intervention by transcendent powers, miracle, portent. For John, these wonders are not just miracles, but signs that point to who Jesus actually is. According to verse 11 this sign had two functions: