Where is Saint Thomas When Jesus appears to the Apostles? 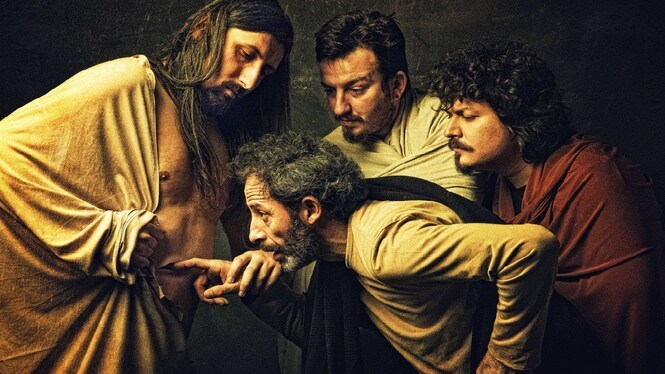 Where is Saint Thomas When Jesus appears to the Apostles?

On the feast of Saint Thomas on July 3rd, we enlisted ten good things we can learn from Jesus’ encounter with Thomas on the second day of His appearance.

It is always easy to criticise Saint Thomas or to talk about faith and doubt. Hence, there are other great lessons we can take from that encounter.

The truth is that the gospel of John that tells us that Thomas was not among the twelve when Jesus appeared for the first time, does not tell us the reason for that. And there is no biblical reference that gives us a straight answer to that.

What we shall do here is to use some available tools, bible references and some approaches to decipher the whereabout of Saint Thomas.

Therefore, this is not a certainty to provide us with the actual place that Thomas went. What we shall do is to critically analyse it to the best we can.

Therefore to improvise some points to this, let us consider these:

We can use the lock-room theory to answer the question; Where is Saint Thomas When Jesus appears to the Apostles?

John 20:19 tells us that on the first day of the week, the doors were closed in the room where the disciples were for the fear of the Jews. Jesus came and stood before them and greeted them.

It is good to note here that only John reported this encounter. Therefore, this does not mean that after the resurrection, the apostles locked themselves up and were not going out to get their daily needs as many people think.

In the lock-room analysis, we are saying that the apostles may have been coming together or do assemble together because of the fear of the jews. But that does not mean they are not going out. So, it does not mean that they locked themselves up like people in the prison.

When we read Matthew’s account, we will discover that there was no mention of locking themselves together. But Matthew did report that they went together to Galilee to the mountain where Jesus arranged to meet them (Matthew 28:16).

According to Matthew, where Jesus met them was on the mountain and not inside a locked room. So, we can at least see that they can go out despite the fear. But the point is that they always come together.

Mark reports that it was when they were at the table that Jesus showed himself to them (Mark 16:14). There was no mention of locking the room, but as I said, the point is that they are always together.

Luke 24:33 tells us that when the disciples of Emmaus came back they saw the eleven assembled together with their companions. So, the situation here is that the apostles do come together. There is no sign that they locked themselves up without going out. But it could be that whenever they gather together for prayers or fellowship, they lock themselves up, so that the jews won’t come for them.

In Luke 24:34, the eleven told the disciples of Emmaus that Jesus had appeared to Simon. So, presumably, Simon was also alone or was not with the twelve when Jesus also appeared to him.

So, this in a way answers the question of where Thomas went. It could be that he could not meet up on time when they assembled, and immediately he came, they told him that Jesus had appeared to them and left. He reacted(John 20:25).

There are also some allusions that when the news of the resurrection broke out, being a fearless man, He may have gone to the place of resurrection to check truly if Jesus is risen or not. Thomas is always inquisitive and one who is eager to know. Also,John writes that Jesus appeared to them on the evening of that same day that He resurrected (John 20:19). So,Thomas may have been eager to know if the news is true or not, seriously searching for the body of Jesus.

So, when he came back, they told him that Jesus has appeared, He refuses to believe, until He sees with His both eyes. He was eager and hungry to encounter Jesus. John stated categorically that He was not with them (John 20:24). So, the first point is that, Thomas was not able to meet up on time.

Another way to uncover this is to use a hermeneutical approach. Hermeneutics goes with analysis and in-depth interpretation of the biblical texts. It involves an in-depth analysis of the culture and background in which the author writes. We can also apply this method.

To answer the question; where is Saint Thomas when Jesus appears to the Apostles? We try to unravel what the author of the biblical text has in mind. We try to uncover what He tries to portray. The gospel of John was written to strengthen the faith of the Christians of the Johannine community that Jesus Christ is truly God and the Messiah sent by God.

His gospel is full of signs and symbols. He stated his purpose of writing in John 20:30-31. There, he writes “there were many signs that Jesus worked in the sight of the disciples.  But, they are not recorded in this book. These are recorded so that you may believe that Jesus is the Christ, the Son of God. And that by believing this, you have eternal life”.

Also in John 21:24, when He writes “This disciple is the one who vouches for these things and has written them down and we know that His testimony is true”.

So, of all the four gospels, John is the only person who writes as an eyewitness. He writes exactly those words, and discussions that Jesus had with the people.

He did this to provoke people to deep faith in Jesus as the son of God. John explicitly proves Jesus to be God (John 1.1) who brought all things into existence (John 1.3). He is the one who reported that Jesus shows that He is God and one with the Father when He tells Philip, to have seen me is to have seen the Father (John 14:9).

Therefore, when we look at other gospels, John is the only one that reported Jesus’ encounter with Saint Thomas. Hence His narrative of Thomas’ later encounter with Jesus was a way He is letting us know that he is not the only one who acknowledges Jesus’ divinity. For, when Thomas saw the holes in His hands and feet, he shouted “My Lord and My God”. Thereby acknowledging also that Jesus is God and the true Messiah.

Apart from Matthew whom we know as a tax collector, a good number of other apostles of Jesus are fishermen. We can see this in John 21 when Thomas joined Peter, the sons of Zebedee and other disciples whose names were not mentioned to go fishing at the sea of Tiberias.

So, since the apostles did not lock themselves up the way we think, this theory is saying that it is possible that Thomas went fishing when Jesus appeared the first time.

Remember that Thomas is bold and fearless. In John 11:11-16, when the apostles were reluctant to go to Bethany, it was Thomas who told them “let us go there and die with Him’. Also in John 13:36-38, when Jesus rebuked Peter for asking Him where He is going that he is ready to lay down his life for Jesus, it was Thomas who still repeated the question, asking Jesus to show them the way to the Father (John 14:5-7). Hence, Jesus who could not tell Peter where He was going, told Thomas the way.

So, it could be that as others were afraid of the Jews, Thomas wasn’t afraid of anyone. We can see how he insisted that unless he sees the holes of Jesus’ wounds and puts his finger inside them, he will never believe that Jesus has resurrected. He is a bold and fearless fellow. So, He may have gone fishing or to satisfy a basic need without fearing whose ox is gored. You are free to react and comment on these. God bless you.

When It Looks As If God is Keeping Silent. Opinion Poll vol 1