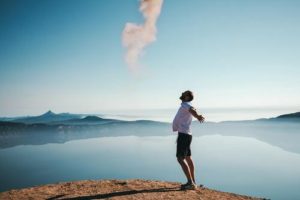 When we passionately read the gospel which was often referred to as the sermon on the plain, one can see that the conditions, Jesus declares as blessed are the things we detest in the world.

Before I was ordained a priest, I used to ask what Jesus truly is indicating here. Humanly thinking, one does not see blessedness in mourning, poverty and persecution. None of us would like to experience them. But Jesus sees blessedness in them.

In this sermon, Jesus re-emphasizes that most conditions we think are bad in the world are truly springs of blessings in the spiritual.

According to this sermon, Jesus promises blessings and a great reward for the poor, the hungry, those who mourn, and those hated and abused for the sake of the Kingdom. He alsy unleashes woes to the rich, the happy, those who have plenty, and those who are praised.

This in essence is a stark difference from the worldly view of true blessedness. To understand this chapter, let us take it bit by bit.

We use Makarios to describe someone who is happy not because of attachment to the things of the world but because of His dependence on God.

Therefore, One in a state of Makarios is someone free from daily worries and worldly affairs. The things of the world cannot toss him up and down.

Makarios is a state of blessedness from God. So, the sermon describes as blessed to those whose dependence, happiness, and confidence are on God. This is where true happiness lies.

True Happiness can only be found in God and not in earthly riches. True Happiness Lies in total dependence on God even in the time of challenges.

The man who trust in God deeply experiences a state of Makarios.

In everything, and despite any condition, he believes that God takes ultimate control.

In Greek mythology, Homer and Hesiod say that the  Greek gods are always happy (Makarios).

This is because the world of men who were subject to death, fear, poverty, and disease do not affect them.

So, Makarios indicates that inward happiness that comes from God, through God, and for God.

Therefore when Jesus says blessed are the poor or those who mourn, he is not in any way extolling poverty or encouraging mourning.

The poverty that Jesus talks about is poverty of the spirit. It is that hunger and sincere desire to remain close to God.

Mourning is when we suffer because of our love for God. One who undergoes this because of Jesus is blessed.

The sermon begins by saying “then fixing his eyes on his disciples he said”.

This is different from the sermon on the Mount (Matthew 5) which Jesus addresses to the crowds.

When Jesus saw how people were surrounding him, seeing their conditions Jesus uses this sermon to encourage them.

Hence, seeking Him, looking up to him, and being with Him is the best thing that can happen to any soul. As Jesus encourages the crowd, we also find encouragement in Him and through Him. This is where true happiness lies.

Secondly, Jesus knows that being his disciple is totally different from that of the world.

The road may not be an easy one but there is true blessedness and a great reward for anyone who does that.

The Blessed and the Cursed

The first to be blessed today are those who are poor.

Jesus promises them the kingdom of heaven. Like I said before, when we read this literally, one may think that Jesus is extolling poverty, No. But to understand this, we have to refer to Matthew 5:3, where Jesus states that this true blessedness is not a blessing for poverty but those poor in spirit.

The poor in spirit are those who count everything in the world as nothing. Their utter dependence is solely on God and they rely on Him for everything they do.

Sometimes when we become rich or rise to a particular position, we tend to forget, that it is God who made us who we are.

We try to feel as if everything is by our power. The poor in spirit are those who may have these but attributed everything to God, just like the Blessed Virgin Mary did in the Magnificat.

The poor in spirit is simply those who know that their greatest need is God and eternal life. God blesses the one who totally recognizes his spiritual poverty before God.

Jesus also blessed those who are hungry.

Matthew also emphasizes that this is not just ordinary hunger but those who hunger for righteousness.

Finally, are those who mourn and those who are hated and persecuted for sake of the Kingdom.

This is when we are suffering because of the good things we have done. It is when people try to attack you for nothing’s sake and when you are suffering because you stand for the truth. For Jesus, when this happens, we should not worry but rejoice and be joyful. There is certainly a great reward in store for you.

Finally, the cursed are those who do everything only for their selfish interest, those who do not think of others. They only work for praises and not for the glory of God. They are those who think because of their wealth, there is nothing like God.

We can also include some people who think the world is the beginning and the end. Today, many  hardly think about their end.

Therefore, Let us seek to be blessed instead of seeking to be cursed. ‌

May God help us to recognize true blessedness in our suffering, hardship, and difficult situations. May He bless you this day. Amen.

Do this Before You Do Anything in Life. Tuesday 23rd Week

Birthday of the Blessed Virgin Mary. God has Reasons for Everything