Life of Saint Peter. Thursday with the Saints. Morning edition

Catholic CatechismREFLECTIONSThursdays with the Saint 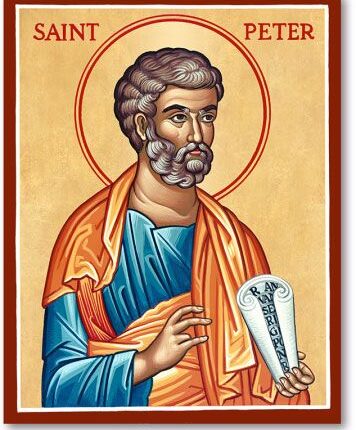 On today’s episode of Thursdays with the Saints, we shall look at the lives of St. Peter and Paul known as the two pillars of the Church. Also on today’s special edition, we shall have both Morning and evening Session with the both saints personally.

In this Morning Episode, we shall meet with Saint Peter the Head of all the Apostles.

Saint Peter have more of his life events recorded in the bible. Saint peter is known as the Bravest of all the apostles and he was the first physical leader of the Church of Christ.

None or little is known about the early life of Saint Peter. He came into lime-light as an adult.

According to the bible account Peter was a native of Bethsaida, near Lake Tiberias and was the son of Jonah. He and his brother Andrew were fishermen on Lake Gennesaret.

How He Met Jesus

Now it happened that he was standing one day by the Lake of Gennesaret, with the crowd pressing round him listening to the word of God, when he caught sight of two boats at the water’s edge. The fishermen had got out of them and were washing their nets. He got into one of the boats — it was Simon’s — and asked him to put out a little from the shore. Then he sat down and taught the crowds from the boat.

When he had finished speaking, he said to Simon, ‘Put out into deep water and pay out your nets for a catch.’ Simon replied, ‘Master, we worked hard all night long and caught nothing, but if you say so, I will pay out the nets.’ And when they had done this, they netted such a huge number of fish that their nets began to tear, so they signaled to their companions in the other boat to come and help them; when these came, they filled both boats to sinking point.

When Simon Peter saw this, he fell at the knees of Jesus saying, ‘Leave me, Lord; I am a sinful man.’ For he and all his companions were completely awestruck at the catch they had made; so also, were James and John, sons of Zebedee, who were Simon’s partners. But Jesus said to Simon, ‘Do not be afraid; from now on it is people you will be catching.’ Then, bringing their boats back to land they left everything and followed him.”

His Role in Christianity

Saint Peter played a great role in Christianity. He was the Head of all apostles and also the Spokesperson of the Apostles as recorded in the Pentecost account in Acts 2.

In Catholicism, Saint Peter is known to be the first pope of the Church and the Head of all popes.

Moral Lesson from the life of Saint Peter.

From the life of saint Peter, we can learn the following lessons:

Peter was instrumental in bringing the Gospel to the Gentiles. He baptized the Roman pagan Cornelius, and at the Council of Jerusalem gave his support to preach to Gentiles, thereby permitting the new Church to become universal.

There are so many stories about Peter that it is nearly impossible to fully encompass his deeds, but one story of note was when he was imprisoned by King Herod Agrippa but was able to escape with the help of an angel.

Saint Peter works made he to be recognised as one of the two pillars of the Church. He was more of a leader than a writer. He Preached Christ from Judea, Samaria, Damascus and all of Rome.

He wrote three epistles in the New Testament and worked to united the Church when issues concerning Sharing of food, Circumcision and eating with idols came up among the early Christian.

The bible recorded many miracles done by Saint Peter; they include the following among others

According to rich tradition, Peter was crucified on the Vatican Hill upside down because he declared himself unworthy to die in the same manner as the Lord. He was then buried in Rome near the Vatican on Vatican Hill.

Saint Peter was not Canonized officially like other saint in the church. His canonization was done by the Pre-Congregation because he was a Martyr.

St. Peter feast day is celebrated together with Saint Paul who the Church celebrated as the Pillars of the Church on June 29 every year.

Saint Peter is the patron saint of Fishermen, Shipbuilders and Netmakers.

May God grant us the Blessings and graces of Saint Peter the First Pope and Leader of the Church and may God help us to imitate his good virtues.

Life of Saint Paul. Thursday with the Saints. Evening edition