Life of Saint Philip Neri. Thursday with the Saint. 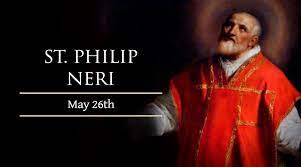 St. Philip Neri was one of four children of Francesco Neri and his wife Lucrezia da Mosciano born in Florence on July 21, 1515. St. Philip had two sisters, Caterina and Elisabetta and a brother who died as a child, thus he was carefully raised.

He was a cheerful and obedient child and he received his early education in Florence from the friars at San Marco, the famous Dominican monastery. At 18 years old, his father sent him to live and work with an older relative, Romolo, who was successful in business, a wealthy merchant at San Germano (current day Cassino) and possibly inherit the business.

While living with his Romolo, Philip would often go pray in the mountains. St. Philip Neri experienced a mystical vision, it was then that he decided to dedicate his life to God. Since he no longer cared for things of the world as the encounter with the Lord had drastically changed his life.

In 1533, he left his relative and went to live in Rome without any money, where he was a tutor of the two sons of a friend Galeotto Caccia, who gave him a room in his house as payment of flour. His first two years in Rome, St. Philip Neri spent his time in a solitary life and had alot prayer time. His daily meal was of bread, water and a few vegetables were sometimes added, his room furniture consisted of a bed, to which he usually preferred the floor, a table, chairs, and a rope to hang his clothes on.

While Rome, he studied theology, philosophy, and wrote poetry. When he considered that he had learnt enough, he sold his books, and gave the income to the poor, although he never made studying his normal occupation again, whenever he was called upon to talk about issues, he would surprise everyone, even the most learned with the depth and clarity of his theological knowledge. St. Philip started visiting the poor and caring for the sick, he set out to re-evangelize the city. He talking to people on street corners, Market and in public squares.

He spent seventeen years serving as a layman in Rome before being eventually ordained a priest, he was known for his cheerfulness, gentle, kind, and had a warm personality but also a serious preacher and a confessor. He started working with young people, finding them safe places to play. St. Philip Neri had a great sense of humor and used this gift when helping others. His two favorite books were the Bible and a joke book.

St. Philip Neri found the Congregation of the Oratory in 1575, a community of Catholic priests and lay brothers dedicated to preaching and teaching, was also known as the Oratorians and are still active today. A famous Oratorian, Cardinal John Henry Newman, described the approach that St. Philip Neri used in inspiring many people from different walks of life as: “cor ad cor loquitor” or, in English, “heart speaks to heart.” Pope John Paul II described him as, “The loving figure of the ‘saint of joy’. Pope Francis also called the saint, “passionate proclaimer of the Word of God.”

St. Philip Neri died after a long illness, in May of 1595. The entire city of Rome mourned. Because of Philip, many people’s faith was increased.

In 1544, Pentecost eve, St. Philip Neri had a mystical experience while praying in the Catacombs of San Sebastian. A globe of fire miraculously entered his mouth, causing him to feel his heart dilate and enlarged his heart, breaking his ribs and it caused him no pain.

He was filled with so much of divine love that caused him to scream out, “Enough, enough, Lord, I can bear no more.” This experience changed him for life.

2.”Cast yourself into the arms of God and be very sure that if he wants anything of you, He will fit you for the work and give you strength.”

3.”Do not grieve over the temptations you suffer. When the Lord intends to bestow a particular virtue on us, He often permits us first to be tempted by the opposite vice. Therefore, look upon every temptation as an invitation to grow in a particular virtue and a promise by God that you will be successful, if only you stand fast.”

HIS DEATH AND CANONIZATION

His feast day in the Roman Catholic Church is May 26.

O glorious St. Philip, who was so favour by God with the gift of consoling and assisting thy spiritual children at the hour of death, be also my advocate and father when I shall find myself at that dreadful moment. Obtain for me that at that hour the devil may not conquer me, nor temptation overcome me, nor fear itself revile me; but that, strengthened by a lively faith, a fervent hope and, a sincere charity, I may sustain with patience and perseverance that supreme struggle, and that, full of confidence in the mercy of the Lord, and in the infinite merits of Jesus Christ and the protection of the Most Blessed Mary, I may deserve to die the death of the just, and be united with thee and all the saints in the blessed home of Paradise, to praise and enjoy the Lord forever. Amen.

Olori Flora is a Freelance/ Remote Writer, Designer and Data Entry Officer who ensures accuracy of data entered and scrapped,writes, designs creative graphics, UI/Ux and Videos.
Olori Flora believes that creative contents are required for a better self expression and help simplify things.
She holds an HND in Computer Science from the Auchi Polytechnic, Auchi, Edo State. She is a lover of God’s word and a Marian Devotee.

What Jesus Desires the Most. Friday 15th Week Ordinary Time