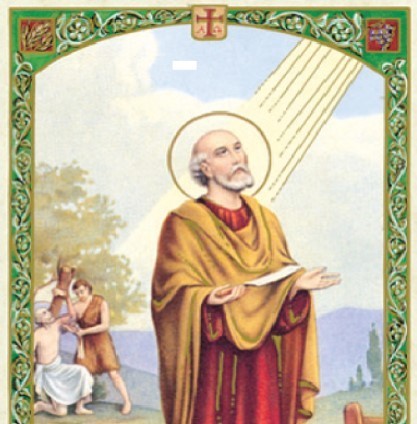 Breakfast with The Word: Feast of Saint Bartholomew.

To live a straightforward life means to live a life without deceit. It means when someone’s life is direct. When he/she speaks or does something, he does not twist his words or hides anything underneath, how you see him is how he is.

Living a straightforward life brings trust from people we have encountered. Today, most of the problems we encounter in life are not because there is an evil plan against us but because we do everything either to deceive or cheat people. Anyone who wants to succeed in life must learn how to live a straightforward life. One who lives such a life is not hypocritical.

Today we celebrate the feast of Saint Bartholomew. Saint Bartholomew gave his life for the gospel. According to the historian Eusebius, Saint Bartholomew preached the gospel in the regions of Arabia, Ethiopia, Libya, Parthia, Persia, and India and then Greater Armenia, where he made many conversions before being flayed alive by the barbarians in Albanopolis.

Bartholomew is a Hebrew surname meaning “son of Tolmai.” While Nathaniel means Gift Of God. It was said that Nathanael is the son of Tolmai or Nathanael Bar-Tolmei. This suggests that they are the same person.

Also, in John 21:2, Nathanael’s presence with other disciples at the Sea of Galilee after Jesus’ resurrection suggests that he was one of the original Twelve and a witness to the resurrection. These reasons suggest that Nathaniel and Bartholomew must be the same person.

The Life of A Hypocrite. Monday 21st Week Ordinary Time

Choose to Remain With Jesus. 21st Sunday Ordinary Time of the Year

Whoever humbles Himself Shall be Made Great. Saturday 20th Week

The Reward that comes from God.

A Man Without Guile.

The gospel today presents us with the call of Nathaniel. Philip is the one who saw Nathanael and told him that they have found the one Moses wrote about in the Law, the one about whom the prophets wrote. He is Jesus son of Joseph, from Nazareth.’ ‘From Nazareth?’ said Nathanael ‘Can anything good come from that place?’ ‘Come and see’ replied Philip.

When Jesus saw Nathanael coming, he said of him, ‘There, truly, is an Israelite in whom there is no deception.

Jesus is God, He can even read the inner thoughts of man. This appraisal about Nathaniel is not flattery but a sincere truth of who he is. Jesus is Someone who always confronts evil. Many times he confronted the Pharisees for living a life of deception, so to say this about Nathaniel is true.

A deceitful man is one whose life is not straightforward. Sometimes he has something in mind but tells you another thing. They are people who can convince you to do the wrong thing but yet will never try it themselves.

Sometimes they come as friends but their lives are fake. They try to convince you, showing how close they are to you. Many today are wandering on this lane.

Any act of concealment or distortion of the truth for the purpose of misleading; duplicity; fraud; cheating is deceit. The life of Saint Bartholomew teaches us to be straightforward both in our words and actions. Let what we sell about ourselves be truly who we are.

Lead People to the Truth.

Something that Philip did today that amazed us was that when He met Jesus, he was overwhelmed with Joy and then led his friend to Jesus.

Jesus is the way, the truth, and life. Nathaniel would never have met Jesus if not through Philip. The striking point here is that Philip could not keep Jesus only to himself. This is truly the mark of a disciple.

Philip did not only tell Nathaniel about Jesus only. He led him to Jesus. Here, he is teaching us to lead by word and by example. Let us lead people to Jesus rather than leading astray. Also when you see what will benefit others, lead people to it.

The major problem that we have today is when we see that something would benefit others, we tend to hide them and withhold them from others. Instead of leading people to a secret that will help them succeed, we mislead them so that they cannot be like us. Philip sees something good and brings His brother to it. When we see something good, do we hide it or also show others the way?

Sincerely, If every Christian can be like Philp, then things will begin to change. If we truly understand that our calling is simply bringing people to Christ, rather than turning them away or misleading them, then many souls will be converted.

Secondly, Saint Philp teaches us the secret of success. If the people who have succeeded can also lead others to the secret of their breakthrough. Also, If they can help their brothers and sisters to be successful like they are, rather than deceiving them or bringing them down, then there will be progress.

If we can promote our brothers and sisters rather than decimating their names and identity, using them as a talk for the day, then there will be progress, peace, and unity.

If we truly care for the other person, let us always be truthful and straightforward. Let us show them the way rather than feeding on their ignorance.

We Need An Encounter.

Before Nathaniel encountered Jesus, He was sceptical about the messiah coming from Nazareth. He tells Philip “can anything good come from Nazareth?

This teaches us that it is not always good to make a judgement about what a person is until you encounter him.

When you hear something negative about someone, do not swallow it hook and sinker until you encounter the person one on one.

Finally, we need an encounter with Jesus to be able to proclaim Him wholeheartedly.

Hence, this conviction can only come when you have an encounter with Jesus.

Finally, like Saint Bartholomew, let us always be straightforward in life.

Do not open your mouth to talk negatively about anyone until you have one on one encounter with him or her. You will see that most times, what you hear is not what is the truth. We need an encounter. Only a little encounter with the person will convince you.

May God bless you dearest and give us the grace to live up to the demands of our calling. May He continue to sustain you. Amen

Let us Clean the Inside First.Tuesday 21st Week Ordinary Time