Seeking The Most Important Treasure. Feast of Michael Iwene Tansi 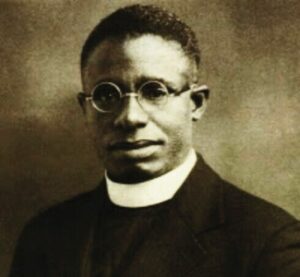 Breakfast with the Word Feast of Blessed  Cyprian Iwene Tansi

Today  the Church In Nigeria celebrates the feast of Blessed Cyprian Michael Iwene Tansi. Blessed Michael Iwene Tansi was born in September 1903 in Igboezunu near the ancient city of Aguleri in southern Nigeria. His parents, Tabansi and Ejikwevi, gave him the name Iwene at birth but was later given the name Michael by the irish missionaries after his baptism.

Many people who came in contact with Michael Iwene Tansi described him as a man of deep piety and care for the poor. He studied at St Paul’s Seminary in Igbariam. After his philosophical and theological studies, he was ordained a priest on 19 December 1937 by Bishop Charles Heerey in the cathedral of Onitsha. He showed deep zeal in His call as a priest.

On foot or bicycle, Fr Michael Iwene Tansi always goes from village to village preaching, catechizing and setting up prayer centres that eventually became parishes. He will spend hours hearing confessions, even until late at night.

His zeal is a shining example for many people who encountered Him. His life of prayer, deep piety  and humility transformed a lot of people which later resulted in so many vocations to the priesthood, a good example is Cardinal Arinze who was one of his sons.

Fr. Michael Iwene Tansi  later became a Trappist Monk at Mount Saint Bernard Monastery in England. Tansi died on 20 January 1964. He was buried at Mount St Bernard on 22 January. He was beatified by Pope John Paul II on 22 March 1998, His feast day is 20 January.

In His life He took His work and everything about God very seriously. Fr Michael Iwene Tansi sees in God the most important treasure He needs in life. Then puts His energy to work for God.

Let Nothing Stop You from Doing This. Reflection on Mark 3:1-6.

The Sabbath is for Man. Tuesday Second Week Ordinary Time

The Most Important Treasure

In the gospel Jesus compares the kingdom of God as a hidden treasure in a field, which someone has found, hides it again, goes away with joy and sells everything he has and buys the field.

The pointer here is that the true knowledge of the Kingdom is hidden. It is not made easily accessible to anyone.And only those who seek it will find it. In Matthew 11:25, Jesus thanks the Father for hiding these things from the wise and learned, and revealed them to little children.

The secrets and mysteries of the true knowledge of God is for the few who seek God with all their hearts.

If we seek Him, we will find Him (Jeremiah 29:13). This discovery becomes a source of joy, a source of hope, that one considers as the best that has ever happened in his life.

Therefore, the best thing that will happen to any soul is to find God and allow Him to reign in our hearts. This is what Fr. Michael Iwene Tansi did.

God is the most important treasure that we have to acquire by all means. With God you are sure of everything. You are sure of grace, salvation and eternal life.

The Merchant of Great Pearls

Secondly, Jesus compares the kingdom of Heaven to a merchant looking for fine pearls;when he finds one of great value he goes and sells everything he owns and buys it.

Therefore, We must be ready to seek, sacrifice anything and find this hidden treasure by all means.

Like one who is on a discovery to find the greatest value to human life, trying to find a way of survival, trying to find the secret of life, there are many pearls out there that promise to give meaning to life but out of them all lies hidden the most important and finest pearl. Finding this will be a life changer.

3.This discovery gives joy. There is this joy that lives in any soul that has truly found God. The journey to this discovery requires commitment and sacrifice. They are like the disciples, who left everything to follow Jesus (4:18-22; 19:27-30) and Paul, who regarded all else as loss “for the excellency of the knowledge of Christ Jesus, my Lord” (Phil. 3:8).

They are like Solomon who considers the wisdom that comes from God as the most important thing He ever needs.

If we can seek for money and hustle to make it in life, let us not also forget to seek God to acquire eternal life. At last, everything that we seek in this life will all be vanity upon vanity but only God remains.

Therefore, let us seek God with all our hearts. A soul without God is worthless.

May God give us the grace to come close to Him. May He never allow us to lose faith in Him. Amen.

How They think Jesus is Out of His Mind. Reflection on Mark 3:20-21