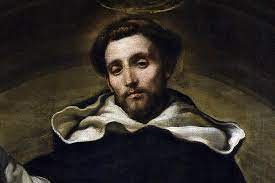 Saint Dominic is widely known as the Saint through whom our Mother Mary gave the Rosary to the world. As we Journey with Mary in this Beautiful and Graceful month of MAY, let us meet Saint Dominic Dominic and learn from his life.

His Birth and Early Life

At fourteen years of age, Dominic was sent to the Premonstratensian monastery of Santa María de La Vid and subsequently transferred for further studies in the schools of Palencia.

In Palencia, he devoted six years to the arts and four to theology. At some point in time, he also joined Santa María de La Vid as a canon.

In 1191, when Spain was desolated by famine, young Dominic gave away his money and sold his clothes, furniture, and even precious manuscripts to feed the hungry.

Saint Dominic  reportedly told his astonished fellow students, “Would you have me study off these dead skins when men are dying of hunger?”

At the age of 24, Dominic was ordained as a priest, and subsequently joined the canonry of the Cathedral of Osma.

In 1198, Diego de Acebo, the Bishop of Osma, having reformed the chapter and assigned himself as prior, made Dominic the subprior of the chapter.

Spread of the Rosary

The spread of the Rosary, is attributed to the preaching of Saint Dominic. For centuries the Rosary has been at the heart of the Dominican Order.

Pope Pius XI stated, “The Rosary of Mary is the principle and foundation on which the very Order of Saint Dominic rests for making perfect the life of its members and obtaining the salvation of others.”

For centuries, Dominicans have been instrumental in spreading the Rosary and emphasizing the Catholic belief in The Power of the Rosary.

According to legend, Saint Dominic received the Rosary during a period of prayer at the abbey in Prouille. This allegedly took place in 1214 during an apparition of the Virgin Mary.

In 1215, Saint Dominic established himself, with six followers, in a house given by Peter Seila, a rich resident of Toulouse.

Saint Dominic  saw the need for a new type of organization to address the spiritual needs of the growing cities of the era, one that would combine dedication and systematic education, with more organizational flexibility than either monastic orders or the secular clergy.

Saint Dominic  subjected himself and his companions to the monastic rules of prayer and penance; Bishop Foulques gave them written authority to preach throughout the territory of Toulouse.

Also in 1215, the year of the Fourth Lateran Council, Dominic and Foulques went to Rome to secure the approval of the Pope, Innocent III. Dominic returned to Rome a year later, and was finally granted written authority in December 1216 and January 1217 by the new pope, Honorius III, for him to form the “Ordo Praedicatorum“ (“Order of Preachers“).

In the winter of 1216–1217, at the house of Ugolino de’ Conti, Dominic first met William of Montferrat, who joined Dominic as a friar in the Order of Preachers and remained a close friend

Saint Dominic  became famous as a result of his mercy and his work. Several other prominent religious figures of the time petitioned for Dominic to be made bishop.

He refused at least three attempts at promotion, saying he would rather run away with nothing than become a bishop.

Dominic remained steadfast to his mission to establish an order dedicated to promoting morality and the expulsion of heresy.

In July of 1221, Saint Dominic took ill with a fever. He asked to be laid on the ground, still refusing a bed. He exhorted his brothers to keep a spirit of humility and charity.

After several weeks of illness, he made a last confession and a will, then passed away on August 6. He died in the presence of his brother Dominicans. Dominic was just 51.

Saint Dominic’s body was placed in a humble sarcophagus in 1223. It was then moved to a shrine in 1267.

Saint Dominic is the patron saint of astronomers, the Dominican Republic, and the innocent who are falsely accused of crimes.

He is commonly depicted in icons with a dog, or lilies, holding a book. His hair always appears cut with a tonsure.

Saint Dominic is one of the few historical figures after whom two sovereign countries are named: Dominica and the Dominican Republic. The capital of the latter, Santo Domingo, also bears his name.

May God bless you dearest as you imitate the lifestyle of Saint Dominic, Amen.

Jesus is the Master. Thursday Fourth Week of Easter

When Our Souls are in Trouble: Friday Fourth Week of Easter