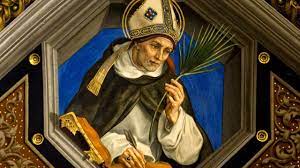 Life of Saint Albert the Great.

On today’s weekly series of Thursday with the Saint, Let us look deeply into the life of the create saint whose way of life is an inspiration to many. We shall also see his achievement and contributions towards the growth of the Church…

Born in Lauingen, a town which still stands today in southern Germany in the year 1193, Saint Albert the Great was the eldest son of a wealthy German lord.

He had the best of Education as a child and also attended the University of Padua, where he learned about Aristotle and his writings and he became a master of Philosophy.

Sometime around the year 1223 or so, Albert experienced an encounter with the Blessed Virgin Mary. This encounter moved him so much that he chose to become a member of the Dominican Order. He thereafter studied theology.

He excelled in his studies and later became a lecturer for the Dominicans at Cologne. He also traveled around the region to lecture gaining regional, then international acclaim.

At the same time he started lecturing, Albert produced “Summa de Bono,” after collaboration with Phillip the Chancellor, who was a renowned theologian from France.

In 1245, Albert became a master of theology under Gueruc of Saint-Quentin. He was the first German Dominican to achieve the title. He later went on to teach theology at the University of Paris, and became the Chair of Theology at the College of St. James. One of his students was the famous Thomas Aquinas who would also become a doctor of the Church and a saint.

St. Albert the Great was very interested in Aristotle, and he made commentary on nearly all of Aristotle’s works. He also studied the teachings of several Muslim scholars. At this time, the Islamic world led Europe in terms of scholarship, science, and medicine.

Albertus distinguished the way to knowledge by revelation and faith from the way of philosophy and of science; the latter follows the authorities of the past according to their competence, but it also makes use of observation and proceeds by means of reason and intellect to the highest degrees of abstraction.

For Albertus these two ways are not opposed; there is no “double truth”—one truth for faith and a contradictory truth for reason. All that is really true is joined in harmony. Although there are mysteries accessible only to faith, other points of Christian doctrine are recognizable both by faith and by reason—e.g., the doctrine of the immortality of the individual soul.

He defended this doctrine in several works against the teaching of the Averroists (Latin followers of Averroës), who held that only one intellect, which is common to all humans, remains after the death of man.

In 1254, Albert became the provincial of the Dominican Order. By all accounts, he was a capable and efficient administrator.

Five years later, in 1259, Albert participated in the General Chapter of the Dominicans along with Thomas Aquinas and several other contemporary leaders of the Order. They created a program of study for the Dominican order and developed a curriculum for philosophy.

From this course of study would later arise the Pontifical University of Saint Thomas Aquinas, in Rome. Today, the university which is known as the “Angelicum,” is one of the foremost theological colleges in the world. It is still run by the Dominican order.

In that same year, Pope Urban IV accepted his resignation and reassigned him to preach about the Eighth Crusade to German-speaking people. The crusade was intended to recapture the city of Tunis in North Africa for Christendom, and was a total failure.

In his later years, Albert became renowned as a mediator. He mediated disputes between individuals as well as resolving a dispute between the people of Colonge and their bishop. He also founded Germany’s oldest university in that city.

Albert was very interested in Aristotle, and he made commentary on nearly all of Aristotle’s works. He also studied the teachings of several Muslim scholars. At this time, the Islamic world led Europe in terms of scholarship, science, and medicine.

It was probably at Paris that Albertus began working on a monumental presentation of the entire body of knowledge of his time. He wrote commentaries on the Bible and on the Sentences; he alone among medieval scholars made commentaries on all the known works of Aristotle, both genuine and spurious, paraphrasing the originals but frequently adding “digressions” in which he expressed his own observations, “experiments,” and speculations.

The term experiment for Albertus indicates a careful process of observing, describing, and classifying. His speculations were open to Neoplatonic thought Apparently in response to a request that he explain Aristotle’s Physics, Albertus undertook—as he states at the beginning of his Physica—“to make…intelligible to the Latins” all the branches of natural science, logic, rhetoric mathematics, astronomy, ethics, economics, politics, and metaphysics.

While he was working on this project, which took about 20 years to complete, he probably had among his disciples Thomas Aquinas, who arrived at Paris late in 1245.

Before his death, he mourned the early passing of his great student, Thomas Aquinas, who would later be recognized as a saint and doctor of the Church. Aquinas died in 1274. Albert spent his last years defending the work of Aquinas which is among the most important work in the Church.

3. The greater and more persistent your confidence in God, the more abundantly you will receive all that you ask.

St. Albert the great the Patron Saint of Scientist

St. Albert the Great after suffering a collapse of health in 1278, he died on 15 November 1280 in the Dominican convent in Cologne, Germany.

St. Albert the Great was beatified in 1622. He was canonized and proclaimed a Doctor of the Church on 16 December 1931 by Pope Pius XI.

Life of St. Mathew the Apostle

To get a reward from God.Breakfast with the Word Wednesday 33rd Week