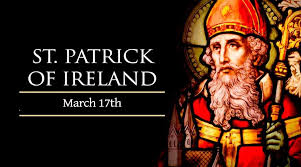 Another saint that we can emulate his life style is saint Patrick, we shall revisit the life of this saint today and learn from him.

St. Patrick was born in Britain into a roman family.  At age 17, he was captured and carried into slavery in Ireland. He stayed in Captivity for a period of six years before reuniting with his family when he escaped from his master.

According to the confessions of St. Patrick, during those six years of captivity, he had his spiritual development. He explained how the Lord had mercy on his youth and ignorance and afforded him the opportunity to be forgiven his sins and convert to Christianity.

While in captivity, he worked as a shepherd and strengthen his relationship with God through prayer eventually leading him to convert to Christianity. St. Patrick studied in Europe principally at Auxerre, but is thought to have visited the Marmoutier Abbey, Tours and to have received the tonsure at Lerins Abbey. Saint Germanus of Auxerre, a bishop of western church, Ordained St. Patrick to priesthood.

The bell is also known as “the bell of the New Testament”. The bell is credited with working a Miracle. An ancient relic attributed to Saint Patrick is an iron bell that can be found on display at the National Museum in Dublin, Ireland.

The story behind it relates how Saint Patrick climbed to the top of a mountain now known as Crough Patrick.  There, in imitation of Jesus, he fasted for forty days.

During that time demons came and tormented him, but he stayed true to his faith.  As the evil entities grew more aggressive, he prayed to God, and finally drove them off using the bell.

Saint Patrick death date is not known but the Church accepted march 17 which is the Saint feast day to be his death date.

During the lifetime of St. Patrick, canonization was done on regional or diocesan level. Soon after the death of people considered very holy, the local church affirmed that they could be liturgically celebrated as saints.

Therefore, Saint Patrick was not formally canonized as a saint. Though other churches believes that He a saint in heaven and his name is also found in the List of Saint.

Saint Patrick feast day is celebrated on the 17th March.

Among the miracles of the famous saint Patrick, these two stands out;

The legend goes that he climbed to the top of a mountain overlooking the sea and ordered all the serpents in Ireland to assemble at his feet before he drove them into the water by beating a drum.

The King promised Patrick that if he could bring the girls back to life he would convert to Christianity.  Patrick took the hands of the girls and appealed to God.  Suddenly the burial chamber was filled with light and the girls rose from death.  The King kept his word and was baptized.

From Saint Patrick, we can learn this few virtues to help us During this Lenten season

He lived a life of Prayer

St. Patrick is one of those saints who gave time to prayer. We are to learn from this saint especially at this Lenten season to intensify our prayer life.

He Lived a life of a Missionary

In this our time when we need more missionaries to proclaim the Goodnews, we can learn from St. Patrick that we are all called to a life of mission. We should go out and witness for Christ by our life, words and actions.

St. Patrick lived a live of Obedience and trust in the word of God. He always believed in the Scriptures and the promises of God.

May the Strength of God pilot us.

May the Power of God preserve us.

May the Wisdom of God instruct us.

May the Hand of God protect us.

May the Way of God direct us.

May the Shield of God defend us.

May the Host of God guard us

Against the snares of the evil ones,

Against temptations of the world.

May Christ be with us!

May Christ be before us!

May Christ be in us,

Christ be over all!

May Thy Salvation, Lord,

May God help us through the Intercession of Saint Patrick as we journey through this Lenten season. Amen

If God says So, Do This: Reflection on the Feast of Saint Patrick

The Four Marks of the Church. Sunday Rice and Stew (Catholic Catechism)

The Four Marks of the Church. Sunday Rice and Stew (Catholic…