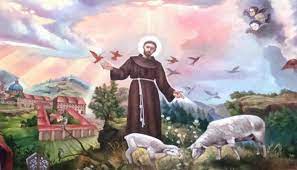 Thursday with the Saint

Francis of Assisi was born in late 1181 or early 1182, one of several children of an Italian father, Pietro di Bernardone dei Moriconi, a prosperous silk merchant, and a French mother, Pica de Bourlemont, about whom little is known except that she was a noblewoman originally from province Pietro was in France on business when Francis was born in Assisi, and Pica had him baptized as Giovanni.

Upon his return to Assisi, Pietro took to calling his son Francesco (“Free man”, “Frenchman”), possibly in honour of his commercial success and enthusiasm for all things French.

Lesson from the Saint life during Lent

History have it that St. Francis lived at the expense of his parent wealth and influence. He had all the good things of life.

As a youth, St. Francis was handsome, witty, gallant and delighted in fine clothes. He lived an extravagant life style lavishing the wealth of his parent on friends, clothing and pleasure.

The turn around came to Francis life when he encountered a beggar where he went to sell clothes for his father. In this account, he was selling cloth and velvet in the marketplace on behalf of his father when a beggar came to him and asked for alms.

At the conclusion of his business deal, Francis abandoned his wares and ran after the beggar. When he found him, Francis gave the man everything he had in his pockets.

His friends mocked him for his charity; his father scolded him in rage. This incident made Him to denounce his father’s riches and follow the life of poverty.

After denouncing the riches of his Father, St. Francis was seen begging at the road side for others to feed. This indeed is a great lesson to us during this Lenten period that we can live our life for others.

Just like Veronica wipes the face of Jesus and Simeon helps Jesus carries his cross, we too can be like St. Francis of Assisi who begged for others to eat, wear good clothes, go to good school, get good health care and serve God happily.

St. Francis lived a live of spreading the word of God. He made every attempt to preach the word to nature which includes human beings and animals.

One account describes how one day, while Francis was traveling with some companions, they happened upon a place in the road where birds filled the trees on either side. Francis told his companions to “wait for me while I go to preach to my sisters the birds.”

The birds surrounded him, intrigued by the power of his voice, and not one of them flew away. He is often portrayed with a bird, typically in his hand

Francis set out to imitate Christ and literally carry out his work. This is important in understanding Francis’ character, his affinity for the Eucharist and respect for the priests who carried out the sacrament.

He preached: “Your God is of your flesh, He lives in your nearest neighbour, in every man.”

He and his followers celebrated and even venerated poverty, which was so central to his character that in his last written work, the Testament, he said that absolute personal and corporate poverty was the essential lifestyle for the members of his order.

He believed that nature itself was the mirror of God. He called all creatures his “brothers” and “sisters”, and even preached to the birds and supposedly persuaded a wolf to stop attacking some locals if they agreed to feed the wolf.

His deep sense of brotherhood under God embraced others, and he declared that “he considered himself no friend of Christ if he did not cherish those for whom Christ died”.

Quotes of St. Francis of Assisi

On 13 March 2013, upon his election as Pope, Archbishop and Cardinal Jorge Mario Bergoglio of Argentina chose Francis as his Papal name in honor of Francis of Assisi, becoming Pope Francis I

At his first audience on 16 March 2013, Pope Francis told journalists that he had chosen the name in honor of Francis of Assisi, and had done so because he was especially concerned for the well-being of the poor.

The pontiff recounted that Cardinal Claudio Hummes had told him, “Don’t forget the poor”, right after the election; that made Bergoglio think of Francis. It is the first time a pope has taken the name.

St. Francis is the patron of animals, merchants, and ecology.

May God help us to imitate the life style of St. Francis of  Assisi During this Lenten Period who lived for others and the Poor. Amen.

If We Truly Know God, We will do These. Friday of the 4th Week of Lent