We have to Believe. Feast of Saints Philip and James 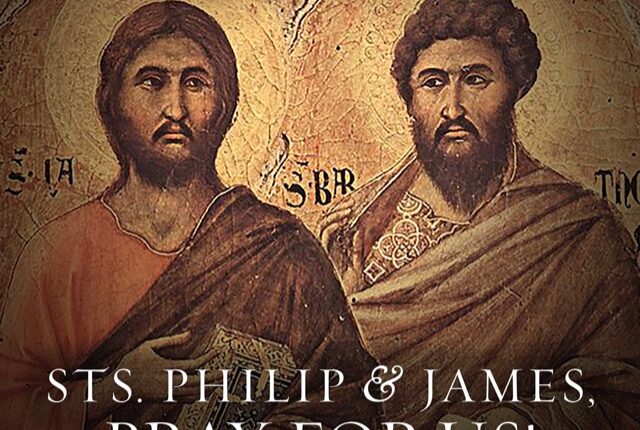 Breakfast With the Word Feast of Saints Philip and James

Today, the Church celebrates the feast of the two great apostles of Jesus Christ: Saints Philip and James. When we go through their ordeals and with the readings of today, we can conclude that these two great apostles teach us what it means to believe.

To say that we believe in something is not for the mere fact of saying that. It involves the mind, strength and actions. To believe something is to accept the thing as true and nothing more.

When you believe in something or somebody. You will not allow anyone to make you shift either to the right or to the left. To believe is focusing your attention and faith on someone or something you accept as true.

As the day goes by, many things do come to affect our faith. Faith is going to extinction. Today many do not have respect again either for God, for Jesus and not even the church.

Every day, the hatred and attack against Christianity are increasing. Priests are being relegated, insulted and hated. When a minister advises someone on what he /she can do, they relegate it and treat him as a nobody. We forget what they truly represent and this is what they are.

Things are changing every day and the more this is happening, the more faith is going down. Many people now attack the church, because of political and personal interests.

Secondly, those who believe or who are trying sometimes tend to give up when problems and difficulties come their way. In essence, we have to believe if we truly believe. Saints Philip and James dedicated themselves and defended the church with their lives.

Do You Love Me More than These

Peace From A Divine Encounter

As You Sail Through the Sea of Life

The Way To Bear Good Fruits

Work is Extremely Important: Feast of Saint Joseph the Worker

Pray With Mary: Feast of Our Lady, Mother of Africa

When Our Souls are In trouble

Jesus is the Master. Thursday Fourth Week of Easter

What We Know About the Saints Philip and James.

Philip, like Andrew and Peter, is from Bethsaida. We see the call of Philip in John’s gospel account (John 1:43). Philip was a man who was eager to learn and free to share whatever he has.

When Philip met Jesus, eager to share the good news, He rushed immediately and introduced Nathaniel to Jesus (John 1:45).

In John 6:5-9. Jesus approached Him before the miracle of the feeding of the multitude. He complained that what they had is only two hundred denarii which would not be enough for the multitude.

With the help of his kinsman St. Andrew the Apostle, he brought word to Jesus that certain Greeks want to see Him (John 12:21–22). In today’s gospel, Philip asks Jesus to reveal the Father.

He was said to be a curious person who is always eager to learn. Many people confuse Him with St. Philip the Evangelist (Philip the Deacon), one of the seven deacons of the early church (Acts 6:5).

Tradition has it that he preached in places like Greece, Asia Minor and Syria. It was during one of those ministries, according to tradition, that he was martyred.

He tried to convince the wife of the local ruler to convert to the Christian faith and the furious ruler ordered St. Philip to be both crucified upside-down.

Another person is James. The James that we celebrate today is not James brother of John, son of Zebedee, but the James mentioned as the son of Alphaeus.

Tradition refers to him as “James the Less”, to distinguish him from James the son of Zebedee. Some historians like St. Jerome presented him as the one who is the cousin of Jesus. Her mother is a different Mary, (Mark 15:40).

He was the leader of the Jerusalem Christians. He is among the pillars of the Church with Saints Peter and John the Evangelist.

Though recent scholars try to distinguish between James the son of Alphaeus and James the brother of Lord.

The reason is that nothing much was known of James the son of Alphaeus. But the church sees that both James are the same.

For example, in His epistles, Paul reported that when He went to Jerusalem, He stayed with Peter for fifteen days and saw none of the other apostles apart from James the Lord’s brother. (Galatians 1:18–19).

This asserts that this James is the apostle that he met in Jerusalem and a cousin to our lord, brother to Jude (Jude 1), son of Alphaeus mentioned in Matthew 10:2-3, and whose mother is different Mary (Mark 15:40).

After King Herod Agrippa I of Judea in about Ad 44 beheaded the Apostle Saint James, son of Zebedee, and after Peter fled from Jerusalem (Acts 12:1–17).

He became the chief spokesman for the Jerusalem church at the Council of Jerusalem regarding Paul’s mission to the Gentiles (Acts 15:13) and final visit to Jerusalem (Acts 21:18).

James was in charge of the Church at Jerusalem; Like His brother St Jude, He identifies Himself as the servant of Our Lord Jesus Christ (James 1:1) in his epistle, which is another proof that he may be one of the apostles.

He converted many Jews to the Faith. James remained the leader of the Jerusalem church until his death around A.D. 62.

The apostles Saints Philip and James defended the gospel with their strength and blood and died for it because they believe in it.

Therefore, we have to believe in what we profess. In essence, when we truly believe, we can defend the faith with every last drop of our strength.

1. In the first reading, Paul writes “Brothers, I want to remind you of the gospel I preached to you, the gospel that you received and in which you are firmly established; because the gospel will save you only if you keep believing exactly what I preached to you. Believing anything else will not lead to anything”.

In essence, we have to believe without going to the left and right, every word spoken by Jesus. God the Father also asks us to do the same in the mountain of Transfiguration (Luke 9:35).

Also, the Blessed Virgin Mary also asked us to do the same (John 2:5). The fact is that, Jesus prunes and cleanses us with His word (John 15:3). Therefore, like Saints Philip and James, let us believe always in God’s word.

2. In the gospel, Jesus tells Philip ‘You must believe me when I say that I am in the Father and the Father is in me; believe it through the work that I do, if for no other reason. I tell you most solemnly, whoever believes in me will perform the same works as I do myself, he will perform even greater works”.

Thereby, we have to believe strongly in Jesus Christ and accept Him into our hearts wholeheartedly.

This is the secret of miracles, healing, grace and power. He said in John 15:5, ”if you remain in me and I in you, you will bear much fruit”.

In essence, we have to connect ourselves to Him and believe that He is true and real. What we believe will always affect what we do and how we relate to Him.

Therefore, how you worship your God and defend your faith is enough to rate the level of your belief. This is what saints Philip and James did.

May God have mercy on us and give us the grace to believe in Him. May He always abide with you even in the midst of challenges. Amen.

Jesus does not Reject His Own. Wednesday Third Week of Easter