When We lose the reverence for the Spiritual. Monday 3rd week of Advent 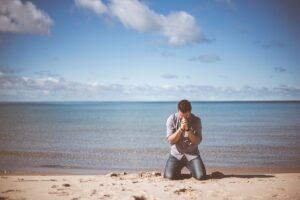 Breakfast with the Word Monday 3rd week of Advent

Everything that is sacred demands a high sense of respect and honour. When we lose respect for the spiritual, there is always the tendency to take the spiritual as if it is nothing.

The problem we have today is that we are losing respect for God and spiritual matters.  This is the reason a man will enter the church and forgets he is in the presence of God.

This is the reason many will enter the house of God and busy on social media. Even the Holy communion that we rever as the body of Christ is taken as if it is nothing; that we no longer have recourse to our spiritual states to receive Jesus into our hearts.

Every day the sense of the sacred and respect for spiritual things begins to go down. The encounter between Jews and Jesus today shows no sign of respect for Him and even to their cherished beliefs.

It is a clear pointer that they took Him for granted all these while. When we lose respect for God and for spiritual things we begin to take them for granted. Hence, we lose the value of what they represent.

When Jesus entered the temple today and began to teach the people, the elders and the chief priests came to Him and began to question His authority for doing the things He was doing.

Jesus requests that he asks them a question and their answer will determine His own response to them. Jesus asks them to tell Him by whose authority John baptized.

They argued among themselves that if they say from heaven, then it is an affirmation of the source of Jesus’ authority and to say no may infuriate the people because they believe John was a mighty prophet. Then they lied and said we do not know and Jesus also says that neither will He tell them.

1. When we evaluate  the gospel of today, we will, first of all, know that the Leaders who come to Jesus intend to demean Him. They intend to look for a point to discredit Him and humiliate Him in the presence of the people.

When we lose respect for God and spiritual matters, the signs of it are seen by what we say and do. How we treat spiritual matters, how we take His ministers, the way we behave when we are in His presence, what we tell people etc are signs whether we hold what we believe in profound awe or we just take it as anything goes.

2. Secondly, if we look critically into the gospel, we will observe that today’s episode happened as Jesus was addressing the people. Jesus has already started teaching the people and the chief priests walked up to Him which hence indicates that they interrupted what He was saying.

It is like when someone is talking to the people and someone walks over to take the microphone from Him. They did not even mind that people were there. This is a sign of hatred, envy and lack of sense of sacredness.

Whenever we lose reverence for the sacred, the true meaning and value of what that thing stands for goes into extinction. This is why many today will enter the house of God to steal, and do all sorts of things because the sense of the sacred is lost.

2. When you look at those who met Jesus, you will observe that they are men of high societal standing. Maybe they think that Jesus is not what He claims, or maybe they are puffed up by their positions that they could not even respect the people who are listening to Jesus.

In the same vein whenever we take ourselves as gods, or whenever we feel we are the one to be worshipped, there is the temptation to disrespect those who are in charge of your spiritual life.

There is also a tendency to feel higher than God. This is why many who are in high political positions today feel they can do anything they want and eliminate any life they feel without qualms of conscience. We seem to forget that we are mere dust that will depart the world one day.

4. Today’s event is not the first time Jesus was preaching in the temple. The elders have seen him teach, heal and feed the multitude. Despite these mighty works they are not convinced. It is a simple sign that they are deaf to God’s message and the message of the Messiah.

This is also what happens when we lose reverence for God. Our spiritual life begins to wane and we become deaf to any gospel message, despite how powerful it sounds. Hence, there is the temptation to close our eyes and ears to things that God does among us. This is why many today take the things of God as if it is nothing. Like the elders, we become spiritually less perceptive.

One day, one of the boys who serve St. Padre Pio approaches Him and asks the reason He loves prostrating before the Blessed Sacrament during Eucharistic Adoration. Padre Pio says ‘my boy, in His presence is beyond what we can explain, if all men know what happens in His presence, they will prostrate daily before Him’.

When Mother Teresa was asked why She visits the Blessed Sacrament first thing in the morning. She answers “ The time one can spend with Jesus is the best time on earth. It is beyond the physical eyes”.

When we see everything only with the eyes of the physical,  there is always the temptation to lose the value of the spiritual. What happens in the spiritual is beyond the physical. Everything is not mechanical.

The elders today only saw Jesus with the eyes of the physical rather than seeing Him as the Messiah. As we wander in the physical, let us not lose sight of the spiritual. God demands our humility and respect.

May God forgive us in any way we have not shown respect for Him. May He never abandon us. Amen.

It is Time to Rejoice. Third Sunday of Advent Year A