Thursday with the Saint. Life of St. Cajetan (Cayetano) 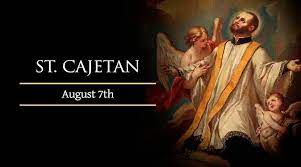 On today’s edition of our weekly series of Thursday with the Saint, we shall look at the life St. Cajetan, a Priest and helper of the poor.

St. Cajetan is one of the Saint we celebrate in the month of August among many saints who lived worthily life.

St. Cajetan the son of Gaspar, born in October 1480 with a silver spoon in his mouth, but he spit it out. His father was a count, his family noblemen, and his status and wealth secure. Gaetano studied theology and law and became a senator of his city-state.

When he went to Rome, he rose straight to the top and became a functionary in the curia of Pope Julius II. But he secretly desired more, meaning that he desired less. It was not his calling to use his education, position, and family contacts to rise ever higher in the church and society. He wanted a more intense encounter with God, so when Pope Julius died in 1513, Cajetan resigned his papally appointed office and studied for the priesthood. He was ordained in 1516, in his mid-thirties, a late vocation by the standards of his own time or even today.

His life as a Priest

After ordination, Fr. Cajetan returned to his native Northern Italy and joined a confraternity of devout men. But the men of the confraternity were from the lower rungs of society, signaling Cajetan’s break with his own family’s privileged background. He then began a life-time of service to the sick and poor in various hospitals and distinguished himself by caring for the most hopelessly ill patients.

Fr. Cajetan’s negative personal experiences of the Church of his era, and of priests specifically, were unfortunately, common. He was scandalized by the tepid spirituality and lax morals of some clerics and saw the need for an ecclesial cleansing. Fr. Cajetan saw exactly, or even more, of what Fr. Martin Luther saw in the same span of years and in the same exact city—Rome—but Cajetan had a far different reaction than Luther. There was no reason to sever a limb from the body of Mother Church. Cajetan sought to transform, not rupture. He desired purification, not reformation.

In 1523 Father Cajetan went to Rome to dedicate himself to the renewal of the clergy along with some like-minded friends. They founded a small Congregation named after Theate, the city where one of the co-founders was a bishop. The four founding members of the Theatines were all well-educated noblemen, including one who would later become Pope Paul IV. But in 1524 they took off their robes of honor, dressed in humble habits, and professed vows in St. Peter’s Basilica.

Their charism was to preach correct doctrine, to care for the sick, to encourage frequent reception of the Sacraments, and to restore love of poverty, knowledge of Scripture, and dignified liturgical practice among priests. The Theatines spread throughout Italy doing their pastoral work and serving heroically among the sick in particular. Cajetan also engaged in some creative pastoral ministry late in his life by establishing Christian pawnshops which granted loans to the poor, saving the vulnerable from rapacious money lenders.

Saint Cajetan placed a special trust in God in regard to the necessaries of life. Many persons are too much concerned about their temporal matters; others, too little; the latter lead an idle life, take no care of their homes, do not work according to their station in life, or squander their earnings or inheritance.

But by far the greater number are too greedy of wealth. Their thoughts, from early morning till late at night, are occupied with their temporal affairs. They do not even take time to say a morning prayer or to assist at Holy Mass, because they fear to miss some hing by it, or think they neglect their household duties. They give not one thought to God or to their soul during the whole day.

In short, they are as much absorbed in their temporal affairs, as if riches were the sole aim and object of their existence. They expect everything from their own exertions, not remembering that all success depends on the Almighty. May you not belong to either of these classes. Work for your livelihood according to your position; avoid idleness; but above all, trust in God, who will assuredly not forsake you, if you do your duty. 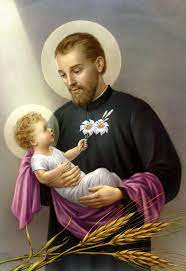 1. “If you want Christ to love you and help you, you must love Him and always make every endeavour to please Him. Do not waver in your purpose because even if all the saints and every single creature were to abandon you, He will always be near you, no matter what your needs may be.”

2. “Do not receive Christ in the Blessed Sacrament so that you may use Him as you judge best
but give yourself to Him and let Him receive you in this Sacrament, so that He Himself, God your Saviour, may do to you and through you, whatever He wills.”

3. “There is no road leading to Heaven but that of innocence or repentance. He who has departed from the first, must take the second; else he is eternally lost.”

Saint Cajetan, saint of good fortune and employment, encourage all those looking for work to grow in understanding of God’s unfailing care for them.

Cajetan died in Naples on 7 August 1547.  His remains are in the church of San Paolo Maggiore in Naples, outside the church is Piazza San Gaetano, with a statue.

His Beatification and Canonization

Cajetan died in Naples on 7 August 1547.  His remains are in the church of San Paolo Maggiore in Naples, outside the church is Piazza San Gaetano, with a statue.

Who Is Jesus to Us? Thursday 18th week Ordinary Time of the Year

If Truly We want to Follow Jesus. Thursday 18th Week