Why is the Catholic Church Unique? Sunday Rice and Stew (Catholic Catechism) 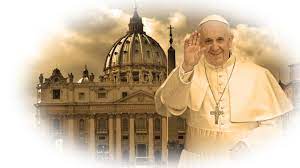 Why is the Catholic Church Unique?

The church is an institution founded by Christ. The church has many features or characteristics that makes it stand out differently from others.

The four marks of the church which includes being Holy, One, Universal and Apostolic distinguishes it from other churches.

The churches belief and teachings concerning the Sacraments, its Doctrine and its Magisterium makes it unique and different from another Church.

The church is both a living organism and an organization. So Christian unity is expressed not only spiritually, but in organizational and practical terms as well.

Jesus spoke of the church as “a city set on the mountain” (Mt 5:14). The church is not invisible. It was intended by God to be readily identifiable.

When Jesus declared that the apostle Peter was the “rock” on which he will build his church, he made possible to identify that church, to know where it could be found. “You are Peter, and upon this rock I will build my church” (Mt 16:18), he established a concrete, visible institution that can be traced in an unbroken line down through the centuries.

St. Peter became the first Bishop of Rome, and the bishops of Rome who have succeeded him (the popes) have continued to fill his special office as the “rock.”

The Church Jesus established is thus the Church in spiritual and organizational communion with the successor of St. Peter – the Catholic Church, which also called the Roman Catholic Church because of the leadership role of the Church of Rome.

Why do Catholics have Crucifixes

The Souls in Purgatory

Life of Saint Rita of Cascia

The central role of the Rome Church in historic Christianity seen in that Church’s unique and decisive function in upholding Christian orthodoxy (literally, “correct doctrine”) throughout the ages.

It is also evident in the papal leadership in ecumenical councils (such as the Council of Trend and the Second Vatican Council).

Why is the Church called “Catholic”? The word means “universal.” It describes both the scope of Jesus’ saving mission – He came to redeem the whole world – and the extent of the organization He established – a global Church embracing all peoples.

The first recorded use of the term is in a letter written by a bishop of Antioch, St. Ignatius, who was taught by the apostle John and may well have known the apostle Peter himself.

The Catholic Church, is the universal Christian family in communion with St. Peter’s successor, the pope. Founded by Jesus Christ Himself through the apostle, it is unique both in its Catholicity and in its adherence to the “rock.”

May God bless you all. Happy Sunday and Feast of Corpus Christi.

The Nourishing Power of the Body and Blood of Christ

Do not Judge. Monday 12th Week Ordinary Time of the Year