Life of Saint Rita of Cascia. Thursday With the Saint 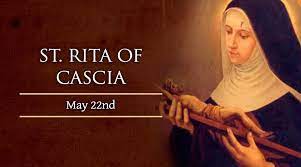 Life of Saint Rita of Cascia

In our world of today where we live with many worries and challenges, where solutions seem almost Impossible, let us look into the life of Saint Rita of Cascia who is the Saint for impossible cases.

Saint Rita of Cascia was born in a small suburb of Cascia in Italy. She was given the name “Margherita” as her Baptismal name which means “Pearl”.

Many people out of affection started calling her Rita Hence the name Rita of Cascia. Her parents were noble, charitable and well known in her small community.

During her time, it was a common Practice for parents to give their girls to marriage at an early age. Saint Rita’s case was no exception. She was given into Marriage at age twelve.

Her husband, Paolo Mancini, was known to be a rich, quick-tempered, immoral man, who had many enemies in the region of Cascia.

The marriage lasted for eighteen years, during which she is remembered for her Christian values as a model wife and mother who made efforts to convert her husband from his abusive behaviour.

Rita endured his insults, physical abuse and infidelities for many years. According to popular tales, through humility, kindness and patience, Rita was able to convert her husband into a better person, more specifically renouncing a family feud known at the time as La Vendetta.

Paolo had many enemies in Cascia, but Rita’s influence over him eventually led him to be a better man.

St. Rita mourned her husband’s death and interceded for his soul with great earnest. Rita’s two young sons, in keeping with the vice of the day, talked of avenging their father’s death.

She did all she could to guide her children into forgiveness, but was unable to dissuade them from their evil intentions of violence and revenge.

Prayer was her only hope. She pleaded with God that he would prevent the evil swelling up in the hearts of her sons, or allow them to die before they had the chance to commit a mortal sin and be separated from God forever in hell.

God granted her prayers. Both of her sons fell sick and died within a year, and in a state of grace; God intervened and prevented them from following the evil path of their father.

Journey to the Convent

After the death of her husband and her two sons, St. Rita was all alone in the world. She again sought to enter the convent, as had been her desire from childhood.

However, she was turned away because of her family’s association with the civil strife; some of the sisters living in the convent were family relations of the men who were responsible for killing her husband. To maintain peace in the convent, she was denied entry.

When Rita persisted, the convent told her she could join if she could find a way to mend the wound between the Chiquis and Mancinis.

After asking John the Baptist, Augustine of Hippo, and Nicholas of Tolentino to help her in her task, she attempted to end the feud.

The bubonic plague had been spreading through Italy at that time, and when Bernardo Mancini became infected, he finally abolished the feud with the Chiqui family.

Once the conflict was resolved, Rita was allowed to enter the monastery at the age of thirty-six. It is said that she was transported into the monastery of Saint Magdalene through levitation at night by the three patron saints she appealed to.

Life at the Convent

While at the monastery, Rita performed her duties faithfully and received the sacraments frequently. Rita had a great devotion to the Passion of Christ, and one day, when she was sixty-year-old, she asked, “Please let me suffer like you, Divine Saviour.”

After her request, a wound appeared on her forehead, as if a thorn from Christ’s crown had pierced her. It left a deep wound, which did not heal, and it caused her to suffer until the day she died.

It is said that as she neared the end of her life, Rita was bedridden from tuberculosis. It was then that she asked a cousin who had come to visit for a rose from the garden in her old home.

As it was January, her cousin did not expect to find any roses, but there was a single rose in bloom, which was brought back to Rita at the convent.

St. Rita certainly had a difficult life, yet her heart-breaking circumstances drove her to prayer and helped her to become a holy woman. She began her work of intercession for sinners while she lived, starting with those closest to her heart.

Through her love and prayers, she won the grace of conversion for her husband and both of her sons.

Although her life was filled with sorrows and disappointments, Rita persevered through her trials and was consoled by closely uniting herself with the sufferings of Christ. And he did not abandon her; rather he granted her profound and intimate graces.

Now a saint in heaven, she helps those who are in great need, just as she once was in her earthly life.

Saint Rita was bedridden from tuberculosis and she passed on 22 May.

Usually, the church celebrates the feast day of Saint on the day of their death. Therefore, Saint Rita’s Feast Day is on every 22   May.

O excellent St. Rita, worker of miracles, from your sanctuary in Cascia, where in all your beauty you sleep in peace, where thy relics exhale breaths of paradise, turn thy merciful eyes on me who suffer and weep!

You see my poor bleeding heart surrounded by thorns. You see O dear Saint, that my eyes have no more tears to shed, so much have I wept! Weary and discouraged as I am, I feel the very prayers dying on my lips.

Must I despair in this crisis of my life? O come, St. Rita, come to my aid and help me. Are you not called the Saint of the Impossible, Advocate to those in despair? Then honour your name, procuring for me from God the favour that I ask.

Everyone praises your glories, everyone tells of the most amazing miracles performed through you, must I alone be disappointed because you have not heard me? Ah no! Pray then pray for me to our sweet Lord Jesus that He be moved to pity by my troubles and that, through you, O good St. Rita, I may obtain what my heart so fervently desires.

(Pray the Our Father, Hail Mary, Glory be to the Father, three times.)

If you wish to offer novena, repeat this prayer for nine days.

May God bless you and grant answers to your prayers to Saint Rita of Cascia. Happy Mid-week.

Your Sorrow Will turn to Joy. Friday Sixth Week of Easter