God Invites All to Partake in His Banquet: Sunday Breakfast with the Word

God invites all to partake in His banquet. It is now our choice to respond yes to this invitation or no. Each choice we make has its own positive or negative consequences.

To express how great this invitation is, Jesus uses a marriage feast as His instructive tool. This is because, the Jews celebrate marriage ceremonies in a great manner and secondly, today’s invitation is coming from a King. The people normally respect and honour such an invitation. Their rejection thus is a sign of ingratitude towards God.

In the first reading, Isaiah proclaims that God decorates this banquet with rich foods and fine wines; this expresses how expensive, kingly, rich, great and beautiful this banquet is. But the Jews and the leaders of his time rejected such an invitation. God in His lovely nature extends this invitation to us. It is now our turn to respond or to reject Him.

God invitation for an Encounter

In the first reading, Isaiah describes a few things that will happen in this encounter. He says that God will break the shroud which holds the nations in bondage.  The Jews use shroud as a garment to wrap a dead person in preparation for his burial.

So at this mountain, there will be no more death. He will destroy death forever. God will wipe away the tears of the people and take away every shame. It will be a moment of joy, salvation and deliverance for the people.

God’s invitation is to have an encounter and personal relationship with Him. He invites all to partake in His banquet. This hence refers to what awaits us if we accept this solemn invitation to give God our time and dedicate our lives to Him. 1 Corinthians 2:9 says No eye has seen, no ear has detected and no mind has conceived what God has kept for the people who love him”. So we have to make our choice either to respond or to say no to this invitation. 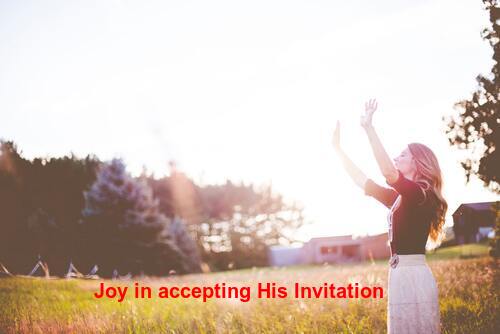 The Servants Who did not come

In the gospel, Jesus compares the kingdom of God to a wedding feast in which a King prepared for His son’s wedding. The gospel says that He sends His servants to those who are first invitees to the wedding. But they reject the invitation. The King hence sends the second batch, describing how great, bountiful and rich the feast is, but yet they turn down the invitation and were totally uninterested. They even beat up the servants, killed and molested them.

1.The interpretation of this parable is that the King who invites is God, His son is Jesus Christ and the servants sent to the people are the prophets and the original guests to this eternal banquet are the Jews. They were the chosen race but they turned down this invitation and became totally uninterested.  The Jews attacked even the messengers sent to them and crucified the Lord. They rejected the authority and teachings of Jesus and hence declared themselves non-citizens of this kingdom.

2.This parable also affirms that the only way to salvation is through Jesus. He is the way the truth and the life but today we have also become like the Jews taking Jesus as an imaginary figure that once existed.  God invites all to partake in His banquet but many today show lack of interest whenever it comes to the things of God.

3. let us always remember that God invites all to partake in His banquet. So to reject Jesus is also to reject this eternal banquet awaiting us. So we have to make our choice either to respond or to say no to this invitation. Sometimes we also attack those whom God has sent to save our souls and pay less attention to them, living the way we want.

In the parable, The attitude of the guests infuriated the King so much that He inflicts his wrath on them by sending His troops to punish and burn their towns. This many refers to the destruction of Jerusalem in 70.CE.

1. The nation ignored the preachings of John the Baptist and the authority of Jesus. They came to prepare the Jews for the feast, but the Jews mistreated, ignored and killed them. Because of this, they faced the consequences of their action. Many refer this to be the reason for the destruction of Jerusalem of which Jesus already prophesied in Luke 19:41-44.

Because those who are invited have counted themselves out, the King now sends His servants to invite everyone they see at the road both good and bad alike to the feast. Hence, since those who are originally chosen are not ready, God now extends this invitation to all, both good and bad, gentiles and pagans, the common people, sinners, etc.

This third sending is the mission of the apostles and the church, who Jesus charges to be His witnesses not only in Jerusalem but to the ends of the earth (Acts 1:8). The invitation is no longer for the Jews but to all.  So we count ourselves lucky to be part of this noble invitation.

The Garment is Important

In the banquet hall, the King notices one man who is not with a wedding garment and questions how he was able to get in without the wedding garment. And thus banishes him from the hall.

It could mean that the wedding garment was shared to them before they entered the hall or that they were notified of the garment to wear. But the man must have been taken unawares or did not bother about being in the wedding garment. In essence, he was not prepared.

This is how the last day will take us unawares especially if we do not prepare ourselves to be among the beneficiaries of this eternal feast.

Every wedding has its own peculiar dress that reflects the aura of the celebration or befits the ceremony. One must garb himself with the garment befitting that celebration. Since we interpret the son as Jesus, we have to put on the image of Jesus Christ. We have to dress in the likeness of Jesus, live like Him and follow His teachings. Like Paul advised in Roman 13:14 “clothe yourselves with the Lord Jesus Christ, and live not in sexual immorality, debauchery, drunkenness and jealousy but decently and thus make no provision for the desires of the flesh.

1. God invites all to partake in His banquet. From the readings, this banquet is rich and kingly. What God prepared for our souls is beyond our imagination. Sometimes like the Jews, we do not pay attention to this and sometimes do not even have time for God.

A boy who has been praying for the intercession of St Francis of Assisi for healing was one day appeared to by this saint. The boy who in ecstasy was very happy to behold such a beautiful appearance asked Francis to heal him, St Francis told him that He will surely be healed but he came in this way to let him know what awaits him in the future. The boy hence changes his intention to pray for his soul.

So let us not live as if the world is our end. Something more glorious is awaiting all of us.

2. The two groups who did not take part in this banquet are those that rejected the invitation and the man without the garment. The first group rejected outrightly while the second man accepted but was not prepared.

These can be seen as those who outrightly rejected Jesus and those who accepted but never gave Jesus a chance in their lives. They are only mere churchgoers and belong to church groups only for the sake of belonging or for the sake of going to church on Sundays and not for the salvation of their souls. In everything we do, let us not forget that our souls need attention even more than we do to our body.

3. Finally we choose to be good or bad, we choose to listen to God or not and we choose to say yes or no to God’s invitation but every choice will either lead to reward or punishment from God.

Let us always know that God invites all to partake in His banquet. He exonerates no one. But the truth is that many have chosen to take the road that leads to damnation. We do this through the way we live.

Today, we no longer have time for God and hardly pay attention to his word. We need Jesus in our daily living. Like the Jews who went to their farms and businesses, we have become more interested in the cares of this world than what awaits us at the end of our lives.

So let us remain faithful to God, there is always light at the end of the tunnel. God bless you and Happy Sunday.

You May Also read

We need Jesus more than Ever

The Pandemic and Faith: Interaction with Fr. Miguel M. Garcia

The Way to Save Our Lives

The Pandemic and Faith:Interaction with Fr. Miguel M. Garcia.

Give to God what belongs to Him: Sunday Breakfast with the Word