Life of Anthony Mary Claret Founder of the Claretian Congregation 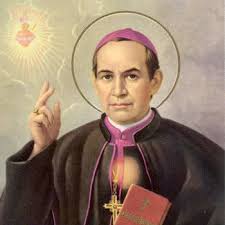 Anthony Mary Claret the fifth child of eleven children born to the family of Juan and Josefa Claret on 23rd December 1807 in Barcelona, Spain.

He started his elementary education at an early age and at age twelve (12), he became a weaver. Claret at age eighteen (18), went to Barcelona to specialize in his trade as a Jacquard loom programmer, and remained there until he was twenty (20) years old. He also devoted his leisure time to study and became perfect in Latin, French and engraving.

At age 22, he left Barcelona for fear of his dream of entering the religious life to be destroyed. Though he wanted to join the Carthusian monks but was later admitted into Diocesan seminary of Vic in the year 1829 and was ordained a priest on the feast day of St. Anthony of Padua, 13 June 1835.

Anthony Mary Claret traveled from one mission to the next on foot. An eloquent preacher fluent in the Catalan language, he drew people from miles around. After a lengthy time in the pulpit, he would spend long hours in the confessional. He was said to have had the gift of discernment of consciences. His missions were so well attended that he often preached from an improvised pulpit in the plaza before the church.

On his return to Spain, Anthony Mary Claret established the Congregation of the Missionary Sons of the Immaculate Heart of Mary also known as the Claretians on the feast of Our Lady of mount Carmel July 16, 1849. On December 22, 1865 Pope Pius IX  gave approval to the congregation

Anthony Mary Claret wrote 144 books. By his sermons and writings he contributed greatly to bring about the revival of the Catalan Language, although most of his works were published in Spanish, especially during his stay in Cuba and Madrid.

In addition to the Claretians, which in the early 21st century had over 450 houses and 3100 members, with missions in five continents, Archbishop Claret founded or drew up the rules of several communities of religious sisters. 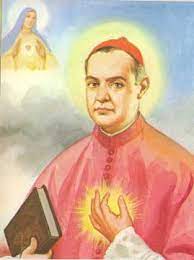 The grace of God was with his servant Anthony Claret and God elevated him through Isabella II of Spain request to Pope Pius IX to appoint him Bishop of Santiago, Cuba in the year 1894. He was consecrated at Vic in October 1850.

His works as a Bishop

As a Bishop, Anthony Mary Claret reorganized the Santiago seminary, Clerical discipline strengthened, and over 9,000 marriages validated within the first two years of his arrival. He erected a hospital and numerous schools.

Three times he made a Pastoral visitation, of the entire diocese, giving local missions incessantly. Among his great initiatives were trade or vocational schools for disadvantaged children and credit unions for the use of the poor. He wrote books about rural spirituality and agricultural methods, which he himself tested first.

On August 25, 1855, he founded the Religious of Mary Immaculate together with Maria Antonia Paris which was the first women religious Congregation (institute) in Cuba. He also visited jails and hospitals, defended the oppressed and denounced racism.

Anthony Mary Claret was an exceptional preacher with incredible charisma: witnesses said his body would become transfigured while preaching or in prayer, he would levitate up to six feet off the ground at times in front of credible witnesses, he stopped a series of earthquakes in Cuba by kneeling on the ground and placing his palms to the earth while uttering prayers, he could calm terrible storms by raising a hand to the sky and blessing the storm clouds, he experienced apparitions of both Jesus and Mary, and was even seen walking on water.

In addition, a supernatural light that radiated from his body while he was saying Mass was seen by many. It was so intense at times that one witness said he saw the light radiate from his body behind the altar all the way to the sacristy. Queen Isabella of Spain even produced a written statement solemnly declaring that she had personally witnessed this phenomenon. 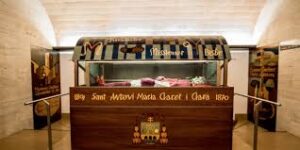 In the year 1869, the Saint retired to the Cistercian abbey at Fontfroide, southern France, where he died on October 24, 1870, aged 62.  His remains were buried in the Catalan city of Vic, in the County of Osona.

Anthony Mario Claret, in 1887 and he was declared Venerable by Pope Leo XIII in 1899. His relics were transferred to the mission house at Vic in 1897, at which time his heart was found to be incorruptible. His grave is visited by many pilgrims till this day. 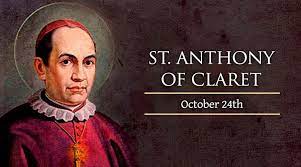 He Feast day was first included in the General Calendar to be October 23 by Pope John XXIII in the year 1960 and was later shifted nine years later with the introduction of the 1969 revision of the Calendar to 24 October the day of his death.

This great saint of our time left many legacies but the most common of them all is the formation of the Claret congregation and many educational institutions ranging from kindergarten to undergraduate school are named after Claret and run by the Claretians in Europe, South America, Africa and Asia. 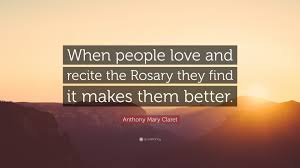 “The apostolic missionary should be a model of all the virtues”

“I always remembered that Jesus had become poor Himself; he chose to be born, to live, and to die in the utmost poverty”

“Mary Most Holy is my mother, my patroness, my mistress, my directress and my all, after Jesus”

1.   Claret lived his vocation as a complex experience of deep friendship with Christ (arising above all from the sacrament of the Eucharist). Through intimacy with the Son, he gradually discovers God the Father, who out of love sends Jesus to save the world.

2.   Claret was always very fond of the Bible and his daily Bible reading. Having become familiar with the Bible while still a boy, he deepened his love for the Scriptures in the Seminary in Vic so much so that the Bible came to occupy a preeminent position throughout his life.

3.    In his approach to Jesus and in understanding the paths to the world’s salvation, Claret drew on the intense presence of Mary. He always felt he was intimately bound to her.

Prayer to St. Anthony Mary Claret for a Cancer Patient

O St. Anthony Mary Claret, who during thy life on earth was often a solace to the afflicted, and didst love and tenderly compassionate the sick, intercede for me as thou dost rejoice in the reward of thy virtues. Cast a glance of pity on (here mention the person afflicted with cancer or other serious ailment) and grant my petition, if such be the will of God. Make my troubles thine own. Ask the Immaculate Heart of Mary to obtain by her powerful intercession the grace I yearn for so ardently, and a blessing that may strengthen me during life, assist me at the hour of death and lead me on to a happy eternity. Amen.

One Our Father, One Hail Mary and One Glory be…

May God through the intercession of His saints grant us the grace to life a life pleasing and acceptable to Him.

Put Your Light on the Lampstand.Thurs Week 3 Ordinary Time of the Year

The Law of Progress. Friday Week 3 in Ordinary Time of the Year