Padre Pio, also known as Saint Pius of Pietrelcina is popular because of the Stigmata he experiences during his life time.

Padre Pio was born into the family of Grazio Mario Forgione on May 25, 1887. The family Comprise of seven children. He was given the name Francesco at birth.

His Parent were peasant farmers. He was baptized in the nearby Santa Anna Chapel, which stands upon the walls of a castle.

He later served as an altar servant in the same chapel. At age 5, he made a decision to dedicate his entire life to God.

His younger sister Grazia later became a Bridgettine nun. He took care of his family Flock of sheep.

The family where this Saint was born were not educated but they usually tell bible stories to their children. As a youth, Francesco had already started seeing Visions and ecstasies.

In the year 1897, after his public education, the Padre Pio made his intention known to his Parent to Join the Capuchin order.

His father left Italy and went as far as the United States to look for a well paid job to made the child dreams come true. What a loving and caring father. At age 15, 6 January 1903, St. Padre Pio entered the novitiate of the Capuchin friars at Morcone.

St. Padre Pio on 22 January, he took  the Franciscan habit and the name of Fra (Frair) Pio, in honour of Pope Puis I, whose Relics was persevered in the Santa Anna chapel in  Pietrelcina were he grew up. He took the simple vows of poverty, Chastity and obedience.

St. Padre Pio in the year 1910 was ordained a Priest by Archbishop Paolo Schinosi at the Cathedral of Benevento. Four days after his ordination, his health been severe and was ask to remain with his family until 1916. That is a period of four years.

He was called back to the public on 4th September 1916, though he served in a small community.

Learning From the saint Life During this Lent

St. Padre Pio lived a life worthy of emulation. After looking at the brief history of this saint, let us look at some of the things one can learn from his life and be better during this lent and beyond.

St. Padre Pio lived a life of Prayer and was devoted to our mother Mary and the Holy Rosary. In this Lenten season, as we prayer we should remember to say our Rosary too.

St. Padre Pio compared weekly confession to dusting a room weekly. Many people who heard of him travelled to meet him and confess to him, ask for help, or have their curiosity satisfied.

In his famous quotes, St. Padre Pio said that

“The person who meditates and turns his mind to God, who is the mirror of his soul, seeks to know his faults, tries to correct them, moderates his impulses, and puts his conscience in order.”

St. Padre Pio recommended the performance of meditation and self-examination twice daily: once in the morning, as preparation to face the day, and once again in the evening, as retrospection.

His advice on the practical application of theology he often summed up in his now famous quote: “Pray, Hope, and Don’t Worry”. He directed Christians to recognize God in all things and to desire above all things to do the will of God. 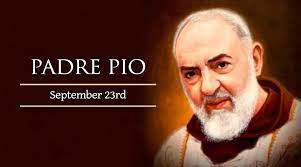 May God Help us to Imitate and live like his Saint Padre Pio, during this Lenten Period and beyond. Amen.

The Fasting that Pleases God: Reflection Friday After Ash Wednesday