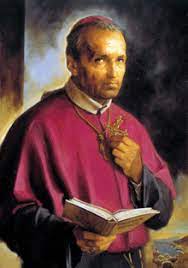 St. Alphonsus Liguori was born in Marianella near Naples on September 27, 1696. He was the first born of a rather large family belonging to the Neapolitan nobility.

He received a broad education in the humanities, classical and modern languages, painting and music. He composed a Duetto on the Passion, as well as the most popular Christmas carol in Italy, Tu Scendi Daile Stelle, and numerous other hymns.

He finished his studies earning a Doctorate in both civil and canon law and began his practice in the legal profession.

In 1723, after a long process of discernment, he abandoned his legal career and, despite his father’s strong opposition, began his seminary studies. He was ordained a priest on December 21, 1726, at the age of 30.

St. Alphonsus Liguori lived his first years as a priest with the homeless and marginalized young people of Naples. He founded the ‘’Evening Chapels’’.

At the time of his death, there were 72 of these chapels with over 10,000 active participants.In 1729, St. Alphonsus Liguori left his family home and took up residence in the Chinese College in Naples.

It was there that he began his missionary experience in the interior of the Kingdom of Naples where he found people who were much poorer and more abandoned than any of the street children in Naples.

On November 9, 1732 St. Alphonsus Liguori founded the congregation of the Most Holy Redeemer, popularly known as the Redemptorists, in order to follow the example of Jesus Christ announcing the Good News to the poor and the most abandoned.

From that time on, he gave himself entirely to this new mission. 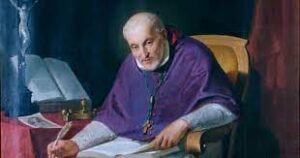 St. Alphonsus Liguori was a lover of beauty: musician, painter, poet and author. He put all his artistic and literary creativity at the service of the mission and he asked the same of those who joined his Congregation.

St. Alphonsus Liguori wrote 111 works on spirituality and theology. The 21,500 editions and the translations into 72 languages that his works have undergone attest to the fact that he is one of the most widely read authors.

Among His best-known works are: The Great Means of Prayer, The Practice of the Love of Jesus Christ, The Glories of Mary and The Visits to the Most Holy Sacrament.

Prayer, Love, his relationship with Christ and his first-hand experience of the pastoral needs of the faithful have made St. Alphonsus Liguori one of the great masters of the interior life.

HIS CONTRIBUTION TO THE CHURCH

St. Alphonsus Liguori greatest contribution to the Church was in the area of Moral Theological reflection with his Moral Theology. This work was born of Alphonsus’ pastoral experience, his ability to respond to the practical question posed by the faithful and from his contact with their everyday problems.

He opposed the sterile legalism which was suffocating theology and he rejected the strict rigorism of the time…. the product of the powerful elite. According to Alphonsus, those were paths that were closed to the Gospel because ‘’ such rigor has never been taught nor practiced by the Church’’.

He knew how to put theological reflection at the service of the greatness and dignity of the person, of a moral conscience, and of evangelical mercy.

Known for the gift of bi-location, St. Alphonsus Liguori was seen at different places at the same time.

He had the gift of visions and prophecies and reading the hearts of people. 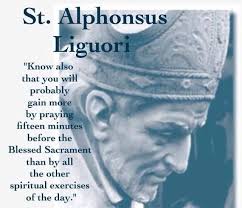 “Acquire the habit of speaking to God as if you were alone with him, familiarly and with confidence and love, as to the dearest and most loving of friends”

“He who desires nothing but God is rich and happy”

“Of all devotions, that of adoring Jesus in the Blessed sacrament is the greatest after the sacraments, the one dearest to God and the one most helpful to us”

From this saint we can learn how to adore Christ in the blessed Sacrament and defend the catholic teaching and theology.

St. Alphonsus Liguori was consecrated Bishop of St. Agatha of the Goths in 1762. He was 66 years old. He tried to refuse the appointment because he felt too sick to properly care for the diocese.

In 1775, he was allowed to retire from his office and went to live in the Redemption community in Pagani where he died on August 1, 1787.

St. Alphonsus Liguori was canonized in 1839, proclaimed a Doctor of the Church in 1871 and Patron of confessors and Moralists in 1950.

St. Alphonsus Liguori is the patron saint of Confessors and moral theologians. 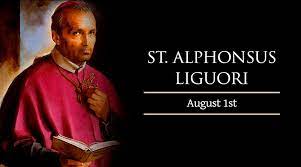 Glorious St. Alphonsus, loving father of the poor and sick, all your life you devoted yourself, with a heroic charity, to lighten their spiritual and bodily miseries. Full of confidence in your tender pity for the sick, since you yourself patiently borne the cross of illness, I come to you for help in my present need…… (Share your request)

Loving father of the suffering, St Alphonsus, look with compassion upon me in my suffering. Ask God to give me good health. If it is not God’s will, then give me the strength to bear my cross patiently and to offer my sufferings with my crucified Saviour and his mother of sorrows, for the glory of God and the salvation of souls, in reparation for my sins and those of others, for the needs of this troubled world, and the Holy souls in Purgatory.

SAY:  One Our Father, One Hail Mary and One Glory Be.

May God help us as we emulate the lifestyle of His saint.

St. Alphonsus Liguori, Pray for Us.

To come After Jesus:Monday First Week Ordinary Time of the Year C

St. Zita Pray for Us.