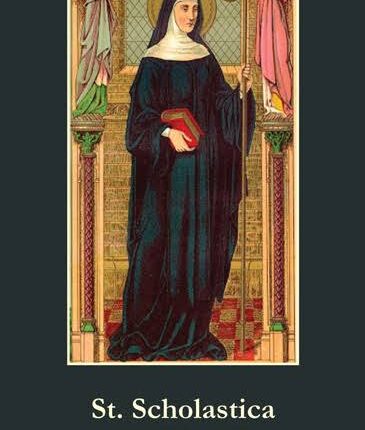 Scholastica was Benedict’s sister, a later tradition says she was his twin (whether this is meant biologically or spiritually, or both is unclear). Scholastica and Benedict were brought up together until he left central Italy for Rome to continue his studies.

St. Scholastica, sister of St. Benedict, consecrated her life to God from her earliest youth.  A young Roman woman of Scholastica’s class and time would likely have remained in her father’s house until marriage (likely arranged) or entry into consecrated life.

After her brother went to Monte Cassino, where he established his famous monastery, she took up her abode in the neighbourhood at Plombariola, where she founded and governed a monastery of nuns, about five miles from that of St. Benedict, who, it appears, also directed his sister and her nuns.

St.  Scholastica visited her brother once a year, and as she was not allowed to enter his monastery, he went in company with some of his brethren to meet her at a house some distance away.

These visits were spent in conferring together on spiritual matters. On one occasion they had passed the time as usual in prayer and pious conversation and in the evening, they sat down to take their reflection.

St.  Scholastica sensed her death was close at hand and she begged Benedict to stay with her until the next day. St. Benedict refused to spend the night outside his monastery, because he did not want to spend a night outside the monastery, thus breaking his own Rule.

St.  Scholastica had recourse to prayer and a furious thunderstorm burst so that neither St. Benedict nor any of his companions could return home. Benedict cried out, “God forgive you, Sister. What have you done?” Scholastica replied, “I asked a favour of you and you refused. I asked it of God and he granted it.”

They spent the night in spiritual conferences. The next morning, they parted to meet no more on earth. Three days later St. Scholastica died, and her holy brother beheld her soul in a vision as it ascended into heaven.

He sent his brethren to bring her body to his monastery and laid it in the tomb he had prepared for himself. She died about the year 543, and St. Benedict followed her soon after. 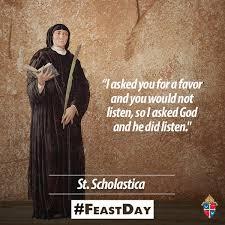 O God, to show us where innocence leads, you made the soul of your virgin Saint Scholastica soar to heaven like a dove in flight. Grant through her merits and her prayers that we may so live in innocence as to attain to joys everlasting. This we ask through our Lord Jesus Christ, Your Son, who lives and reigns with You and the Holy Spirit, One God, forever and ever.  Amen.

When it looks As If God does not answer Prayers Mark 7:24–30

Healing comes from God. Breakfast With the Word Mark 7:31-37