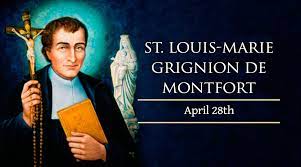 As we prepare to begin the May devotion in a few days from today, let us look at the life of St. Maria de Montfort whose feast day happens to be today also.

He was the first among the eight children born to Joan Baptiste and Jeanne Robert Grignion. His father was a notary.

At age 12, Louis Maria Grignion de Montfort enter the Jesuit college of St. Thomas Becket in Rennes where his uncle was a Parish Priest.

At the end of his ordinary schooling, he began his studies of philosophy and Theology, still at St. Thomas in Rennes.

His Devotion to Angels.

While as a seminarian in Paris, Louis Maria Grignion de Montfort was known for the veneration he had toward the angels

He often ended his letters with a salutation to the guardian angel of the person he is writing to.

Louis Maria Grignion de Montfort had a pious devotion to angels because veneration of Pure Spirit was an integral part of his training and also his culture.

His college teachers the Jesuits were also known for their zeal in propagating devotion to the angels.

Louis Maria Grignion de Montfort was Ordained a Priest in November 1700 where he Joined the Dominicans and asked permission not only to preach the Rosary but also to form a Rosary Confraternities.

The life of Louis Maria Grignion de Montfort is one that has influenced a number of Popes. In Montfort approach to Marian consecration, Jesus in Ma and Mary are inseparable. He views consecration to Jesus in Mary as a special path of being conformed to, united and consecrated to Christ.

Louis Maria Grignion de Montfort practice of consecration to Mary has both internal and external components.

The internal components focus on surrendering oneself as a slave to Mary and to Jesus through her, performing all actions “with Mary, in Mary, through Mary and for Mary”.

The external components include enrollment in Marian societies, or Joining Marian religious orders, making Marian Privileges known and appreciated, and giving alms in honor of Mary.

Among the works of St. Louis Maria Grignion de Montfort his writings and some prayers he composed stood out for him.

Among these include his book titled the secret of Mary, True Devotion to Mary, Method of saying the Rosary, The love of eternal wisdom.

He is also known for composing the morning and night prayers.

Louis Maria Grignion de Montfort was also a renowned poet who during his time was able to compose more than 20,000 verses of hymns.

Some authors argue that a reading of Louis Maria Grignion de Montfort hymns is essential for an understanding of him as a man for appreciating his approach to spirituality.

He is also said to have craved at least three statues depicting the Madonna and Child.

His Contribution to the Legion of Mary

Louis Maria Grignion de Montfort is popularly known as one of the patron saints of the Legion of Mary.

It can however be asserted that no saint has played greater part in the development of the Legion than he.

The Legion of Mary Handbook is indeed full of his spirit.  The prayers re-echo his very word. He is really the tutor of the Legion of Mary: thus, invocation is due to him by all legionaries almost as a matter of moral obligation.

Louis Maria Grignion de Montfort is known as one of the Patron saints of the Legion.

May God through the Prayers of St. Louis Maria Grignion de Montfort bless you and all your heart desires. Amen

Touch Souls with the little You have. Friday 2nd Week of Easter